This blog is normally used to present items from the British Library’s collections, but today I would like to introduce a Malay gem from a neighbouring institution in London. The Wellcome Library, housed at 186 Euston Road, was founded on the collections of Sir Henry Wellcome (1853-1936).  Best known for its medical materials, the Wellcome also holds important Asian collections especially pertaining to medicine, divination and magic, including Malay, Batak and Javanese manuscripts (described in Ricklefs & Voorhoeve 1982).

Last week Wellcome Images was launched, making over 100,000 images freely available for download and reuse, in both low and high resolution.  A search on the keyword ‘Malay’ yielded a wealth of items including Malay manuscripts on magic, photographs of Sarawak and Penang, and watercolour drawings of Singapore and Johor.  But the most exciting item to me was a copy of an early Malay newspaper published in Singapore in 1877, no other copies of which are known to survive anywhere else in the world: Peridaran al-Shams wa-al-Qamar, ‘The revolution of the sun and the moon’. 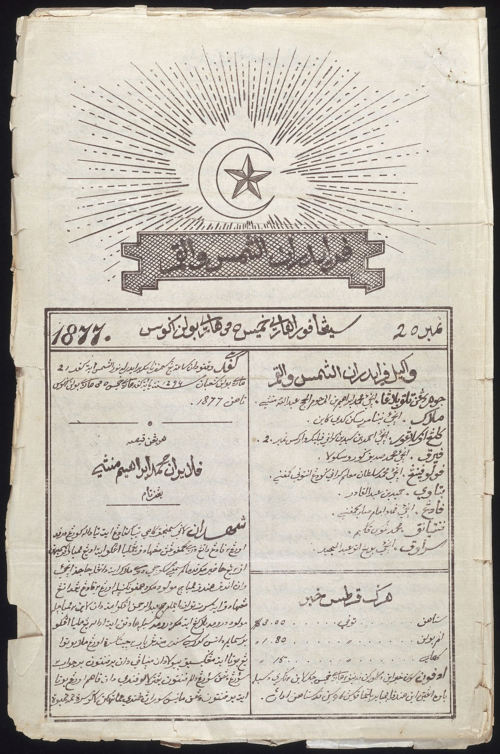 The publication of the title was first noted in January 1880 by E.W. Birch, who mentioned Peridaran Shamsu Walkamer as one of two early Malay newspapers that had ‘after a short run, died out’.  When William Roff published his seminal guide to pre-war Malay periodicals in 1972, although no copies had been traced he guessed that the paper was hand-lithographed.  The existence of a copy of this rare newspaper in the D.F.A. Hervey collection in the Wellcome Library was first brought to light by Ellen, Hooker & Milner (1981: 92), but as their article was mainly about Hervey's Malay manuscripts, not many scholars of early Malay printing were alerted to this discovery.  In 1992, Ahmat Adam noted a contemporary reference in the Padang newspaper Bentara Melajoe, no.8, of 8 May 1887, which mentioned that Peridaran was a weekly, first published on 19 April 1877, and that the editor ‘had studied with Keasberry and Abdullah Munsyi’.  Benjamin Peach Keasberry (1811-1875) was an American missionary who had pioneered lithographic printing in Singapore, while Abdullah bin Abdul Kadir Munsyi (1796-1854) - a renowned Malay writer, scribe and teacher, and author of the Hikayat Abdullah (1849) - had first learned typeset printing from missionaries in Melaka, and later worked with Keasberry at his lithographic press at Bukit Zion in Singapore.

The issue of Peridaran al-Shams wa-al-Qamar shown here is no.20, dated 30 August 1877, with its 8 pages numbered 160-167, and it is indeed lithographed.  From information on the front page, the newspaper appeared every Thursday, and cost 15 cents per issue.  The list of agents covers not only the states of the Malay peninsula but also further afield: Johor and Teluk Belanga, Melaka, Kelang – Selangor, Pulau Pinang, Betawi [present-day Jakarta], Padang, Pontianak and Sarawak.  As well as articles on Aceh and Cirebon and the Russo-Turkish war, of great interest is the main story on the front page: a portion of the serialised Pelayaran Ibrahim Munsyi, ‘The voyages of Ibrahim Munsyi’.  This account by Ibrahim, Dato’ Bentara Dalam of Johor (d. 1904) and son of Abdullah Munsyi, was previously believed to have been printed for the first time posthumously in 1919 (Sweeney & Phillips 1975: xxxii).   Hervey had studied Malay with Ibrahim, and this might be a reason why he kept this issue of the newspaper.

The first Malay newspaper to be published in Singapore was the typeset Jawi Peranakkan, launched in 1876.  However, the earliest surviving copies of this title, which are held in the British Library, only date from March 1881.  This leaves the Wellcome Library’s copy of Peridaran al-Shams wa-al-Qamar of August 1877 not just the only known issue of this title, but also as the oldest known surviving issue of a Malay newspaper from Singapore. 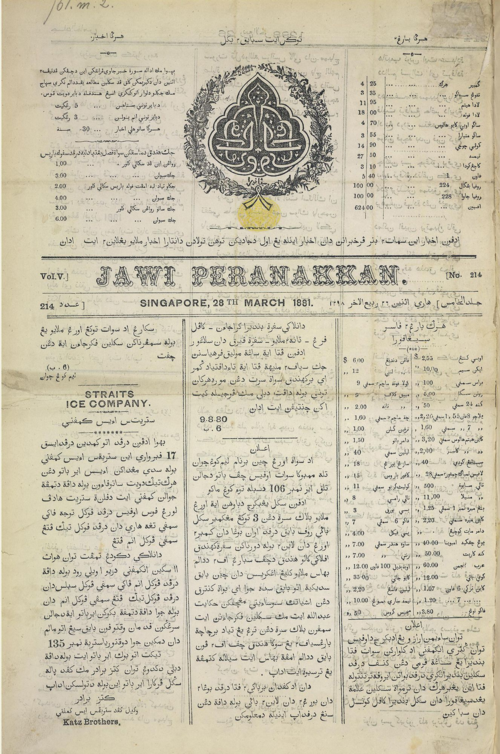 Posted by Annabel Gallop at 2:00 AM