Most Malay manuscripts are written on European paper, which is usually easily identifiable as such from the watermarks which are visible when the paper is held up to the light. But how can we tell if a manuscript is written on Chinese paper?  This question has long exercised Russell Jones, pioneer of and (indeed, the only) authority on the study of the paper of Malay manuscripts, who has addressed the question in several publications (Jones 1986, 1993). 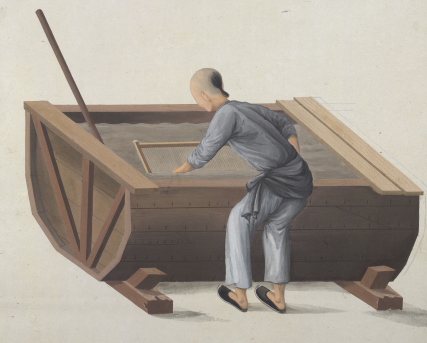 A man making paper, from a volume of Chinese drawings representing men and women from various classes and trades. China, ca.1800.  British Library, Or. 2262, no. 69.

I had often noticed that many of the Malay and Javanese manuscripts in the British Library, and also official documents in English and Dutch from Melaka in the 18th and 19th centuries, were written on thin cream or light brown paper with a very distinctive ‘striated’ surface.  Russell informed me that such these were in fact brush strokes typical of Chinese paper, and he directed me to a very useful article by Ian Wilson: ‘China paper was usually made from bamboo fibre or less commonly rice straw. After pressing to remove water, the damp sheets were brushed onto a smooth drying surface with a coarse fibre brush. The brush invariably left brush marks in the surface of the soft paper. The brush marks are the most easily recognized feature of Chinese paper’ (Wilson 2009: 2).

Detail from an inventory of household goods, cited in a claim made by Fakir Husain bin Syaikh Ismail Lebai against his brother Muhammad Husain in a dispute over an inheritance, Melaka, 12 February 1822.  The list is written on Chinese paper with brush marks evident on the writing surface.  British Library, IOR: R/9/20/8, f.17.

In addition to brush strokes, another indication (albeit not proof, as Russell is quick to caution) of Chinese-made paper is the presence of the seals of Chinese paper merchants. One of the oldest known Malay manuscripts, a copy of the Hikayat Seri Rama given to the Bodleian Library by Archbishop Laud in 1635 (MS Laud Or. 291), has on the bottom of two pages (ff. 84v and 91v) the red ink impression of a Chinese seal.  Russell invited David Helliwell, curator of Chinese collections at the Bodleian, to examine the seals.  Helliwell read the inscription as ‘the rather trite four-character motto fu kuei shuang pao (‘riches and honour, the two treasures’)’ and surmised that the seal most likely ‘related to either the maker or distributor of the paper on which the manuscript is written’, greatly strengthening the probability that the Hikayat Seri Rama was indeed written on Chinese paper.

Early in 2013 Midori Kawashima of Sophia University, Tokyo, drew my attention to two elaborate Chinese seals in an Islamic manuscript from Mindanao.  We showed the seals to Russell Jones and Frances Wood, then head of the Chinese section at the British Library, who identified them as belonging to a paper merchant.  By coincidence, soon after I came across two similar Chinese seals in a Javanese manuscript of Panji Angreni in the British Library (MSS Jav 17), which, as part of the Mackenzie collection, can probably be dated to the early 19th century.  According to Frances, the legible portions of the seal read ‘Guangdong … superior paper … city, Gate of Supreme Peace …’, evidently giving the address of a supplier of superior paper. 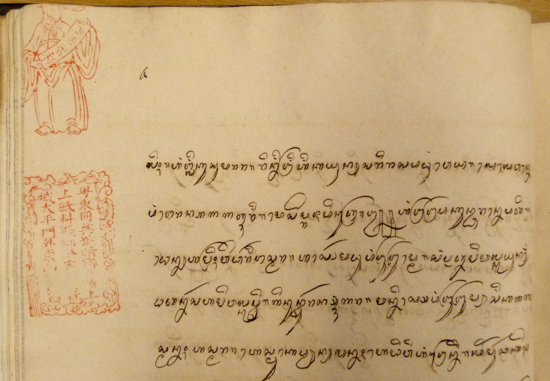 Seals of a Chinese supplier of paper, in a Javanese manuscript of Panji Angreni.  British Library, MSS Jav 17, f.10v.

As I began recataloguing all the Malay manuscripts in the British Library in preparation for digitisation, it was only awareness of the examples discussed above that helped me to recognize the slight traces of red ink on the edge of the page in two Malay manuscripts as similar stamps of Chinese paper merchants.  Both manuscripts are from the John Crawfurd collection and have endpapers of Javanese treebark paper (dluwang), which may indicate an origin in Java, although the manuscripts may also have been acquired earlier in Penang, where Crawfurd had served previously.  Of the seal on the Hikayat Ular Nangkawang (Add. 12382, f. 29v), Frances Wood commented, ‘Three half characters: could be a name, either personal or of a business. The middle character could be 三 but equally could be 五，王 etc- it is difficult to know whether they have been evenly halved or we just have a third’ (F.Wood, 19.4.2013).  On the Syair Dang Sarat, only the smallest portion of the seal remains at the top of a page (Add. 12381, f.20r). 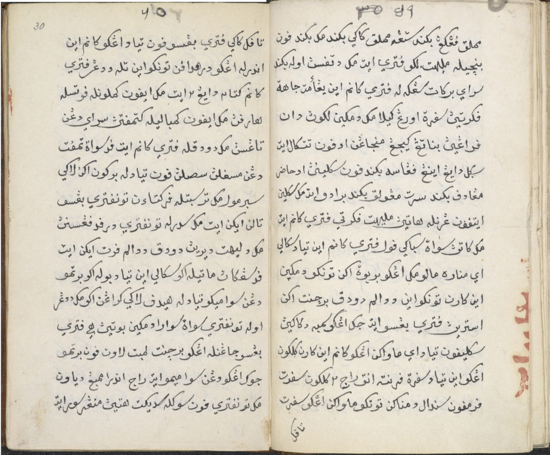 Hikayat Ular Nangkawang, with a partial impression of what may be a Chinese paper merchant’s red ink seal stamped on the edge of the right-hand page.  The MS has been digitised and can be read here.  British Library, Add. 12382, ff. 29v-30r. 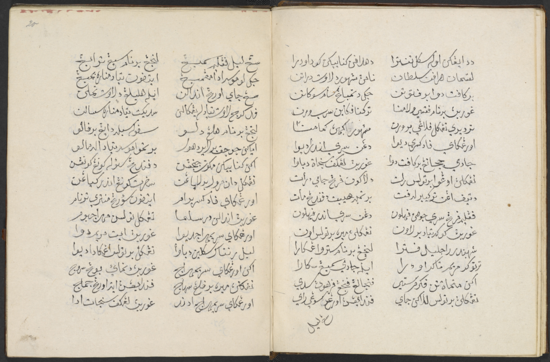 Syair Dang Sarat, with slight red ink traces of a very similar Chinese seal stamped at the top of the left-hand page.  The MS has been digitised and can be read here. British Library, Add. 12381, ff. 19v-20r.

Helliwell stressed the rarity of such seals in the context of Chinese bibliographical studies. ‘Such seals were commonly used as paper marks of some sort, but as they were usually trimmed off, if indeed the paper which bore them was used at all, too few examples survive to have permitted even a perliminary study of them.  Only four of these marks have been discovered in the course of scanning several thousand volumes in the Bodleian’s Chinese collections’ (in Jones 1986: 52).  It is intriguing to think that more traces of Chinese paper merchants’ seals may survive in the less rarified Malay manuscript tradition than on Chinese books themselves.