Among the Persian treasures recently digitised with the generous support of the Iran Heritage Foundation is a fine illustrated copy (BL Add. 7735) of Farīd al-Dīn ‘Aṭṭār’s Manṭiq al-ṭayr (‘Speech of the Birds’), a Sufi allegory of the quest for God. Links to the three previous posts on this work are given below in this, the last in the series, which discusses the final three miniature paintings (see Titley, p. 35) and the accompanying text, in relation to ‘Aṭṭār’s poem and some of its principal themes.

As regards the date of Add. 7735 and the style of its miniatures, there are certain points of similarity with a copy of Manṭiq al-ṭayr completed in 860/1456, probably at Herat. This manuscript is preserved at the Staatsbibliothek, Berlin, and has been fully digitised (see Ms. or. oct. 268). In this Berlin Manṭiq al-ṭayr the shading and contours of the landscapes are occasionally comparable, though the sky is invariably gold rather than blue. The figures are drawn with less assurance and are much less animated. Again, there are contrasts as well as similarities between the respective treatments of, for example, Shaykh Ṣan‘ān espying the Christian maiden (Ms. or. oct. 268, f 49r, compare Add.7753, f 49r), and the prince with the beggar at the gallows (Ms. or. oct.268, f 174r, compare Add.7735, f 181v below). Finally, there is no imaginative use of the margins. On balance, therefore, one is still inclined to favour a considerably later date for Add. 7735 (see my first post). 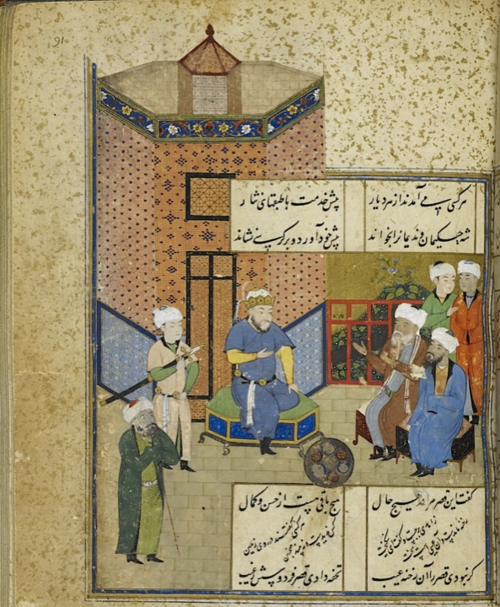 The inevitability of death is, as we have seen, one of ‘Aṭṭār’s main themes. This miniature, folio 91r (ed. Gawharīn, p. 120), shows a king, who has summoned all and sundry to admire his new palace, receiving a sharp admonition from an unimpressed ascetic. Despite its flawless appearance, there is an invisible fissure in one wall through which ‘Azrā’īl, the Angel of Death, will one day enter to collect the king’s soul.

Everybody was coming from every land
to pay homage, bringing trays filled with largesse.
The king summoned the wise men and courtiers
to his presence, and seated them on a dais.
‘Never shall this palace of mine,’ said he,
‘be matched in beauty or in perfection.’
All declared that on the face of the Earth
none had seen its like, and none ever would.
An ascetic stood up, and said ‘Fortunate One,
there is one fissure here, and it is a grave fault.
Had your palace no flaw in the shape of that chink,
you could give Heaven’s castles away for it.’
Said the monarch, ‘No rift have I seen in it;
you’re making trouble out of ignorance.’
‘You who are so proud to be king’ said the sage,
‘there’s a crack there, wide open for ‘Azrā’īl…’ 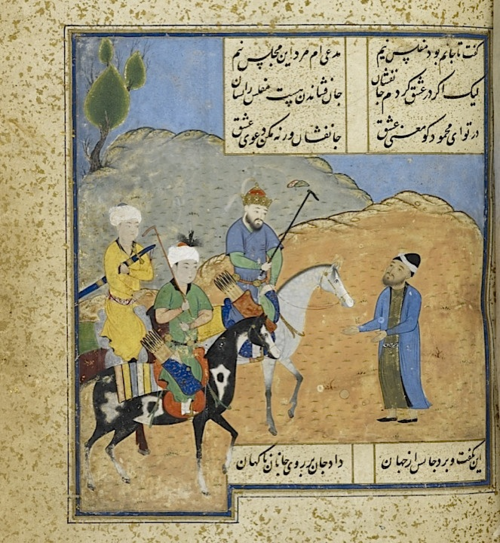 Another favourite theme is the fate of those who fall passionately in love with someone completely unattainable. For ‘Aṭṭār, the case of God's true lovers is similar. In the story illustrated on folio 151r (ed. Gawharīn, p. 191), Sultan Maḥmūd of Ghazna and his page Ayāz are waylaid by an importunate beggar who is infatuated with Ayāz. He announces to the Sultan that the two of them are alike, in that both are like polo balls struck this way and that by the mallet of passionate love for Ayāz – and if the Sultan were a truly devoted lover, he too would be happy to sacrifice his life for his beloved. Having spoken these words, the beggar collapses and dies at the feet of his beloved.

He said, ‘While I’m alive I’m not destitute yet:
I’m a fake and not worthy of this assembly.
But if I fling my life away for love’s sake,
flinging life away is the sign of the bankrupt.
Where, Maḥmūd, is the reality of love in you?
Fling your life away – or drop your claim to love!’
Thus he spoke, and his spirit departed this world –
gave his life in a trice for his loved one’s face. 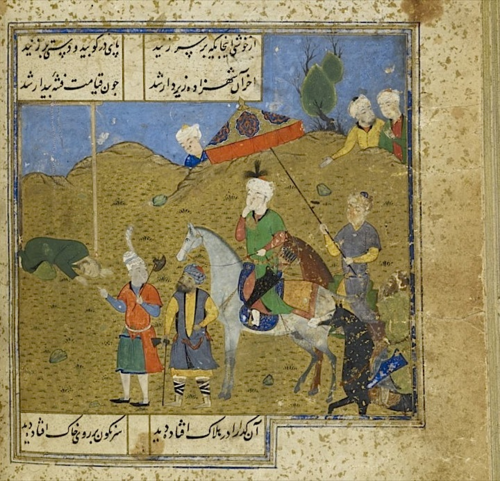 The same theme recurs in the final illustrated excerpt, folio 181v (ed. Gawharīn, p. 227). A beggar  who has publicly declared that he is in love with a prince receives a visit from him. The king, his father, orders that the importunate man be executed; but once his vizier has described his wretched and helpless condition the king relents and sends the prince to go and sit with the poor man, comfort him, and bring him to the royal presence. The beautiful prince hastens to the rescue of his unintended victim, who lies prostrate at the gallows. ‘Aṭṭār tells us:

At this point, [readers,] let go for sheer joy.
and dance about, waving your hands and feet.
That prince finally came to the foot of the gallows;
a tumult like the Resurrection arose.
That beggar he saw in a state like death –
saw him fallen headlong onto the dust…

But our happiness for the reprieved lover is short-lived. No sooner has the prince exchanged a few words with him than the beggar, overwhelmed with joy and rapture at having finally seen and spoken with his beloved, utters a loud cry and dies.

In concluding this series of postings, this question come to mind: what are we to make of the choice of episodes for illustration in this elegant copy of Manṭiq al-ṭayr, a work rarely illustrated?

Of the nine miniatures in Add. 7735, most accompany tales of death, passion apparently doomed to be thwarted, or a failure of will, the exceptions being those of Shaykh Ṣan‘ān, Sultan Mas‘ūd as a fisherman, and the man rescued from idolatry. Very probably the subjects were either chosen by the patron or by the artist(s), or else in consultation between them. The preoccupation with death may, then, reflect the mindset of one or both parties, or a concern that the wealthy patron be reminded of such matters; or it may be a matter of subconscious inclination. There is no point in speculating further; but it may be relevant to point to the discussions of ‘Aṭṭār and his treatment of the darker and lighter sides of death in Ritter’s major study and in an article by the present writer (see below, ‘Further reading’).

In ‘Aṭṭār’s eyes, all of humankind are beggars in need of the help and mercy of a king before whom we are nothing – unless we have love and adoration for Him, in which case divine compassion is bound to embrace us in the Hereafter. In the world’s quest literature, often the hero(ine) must descend into realms of darkness before reaching the light and fulfilling his or her quest. Where ‘Aṭṭār, in his allegories of self-transcendence, takes us with the soul-birds into darkness, he does so in order to bring us to back to the divine Sīmurgh and to a greater, and everlasting, light.

Attar, Farid ud-Din. The Conference of the Birds. Tr. Afkham Darbandi and Dick Davis. London, 1984. New illustrated edition: The Canticle of the Birds by Farîd-ud-Dîn‘Attâr: Illustrated through Persian and Eastern Islamic Art, Paris 2014.

Waley, M. I.  ‘Didactic style and self-criticism in ‘Aṭṭār.’ In: ‘Attar and the Persian Sufi Tradition: The Art of Spiritual Flight, ed. L. Lewisohn and C. Shackle. London, 2007.

Posted by Ursula Sims-Williams at 5:34 PM