Regular users of the Asian and African Studies reading room in the British Library will certainly be aware of the display cases on the landing in front of the reading room. The two large cases by the lifts contain gilded manuscript chests from Thailand and Burma, while the exhibits in the smaller case are changed at least once a year. In the past we have covered themes like Thai illustrated manuscripts, rare printed material from Thailand, and Thai palm leaf manuscripts.

The Javanese story of Sela Rasa
This beautiful Javanese manuscript tells the story of Prince Sela Rasa, who with his two older brothers has been forced to leave their kingdom of Champa.  In the illustration shown in the display, the brothers pay their respects to a holy man.  The sage’s daughter, Ni Rumsari, had dreamt that three handsome men would come to visit.  The characters are drawn according to the stylised conventions of the Javanese shadow puppet theatre, wayang kulit.  The Serat Selarasa is perhaps the earliest finely-illustrated Javanese manuscript known. The manuscript is dated 1804, and according to a note in the text was once owned by the wife of a Dutch East India Company official in Surabaya, before it was presented to Col. Colin Mackenzie in 1812. 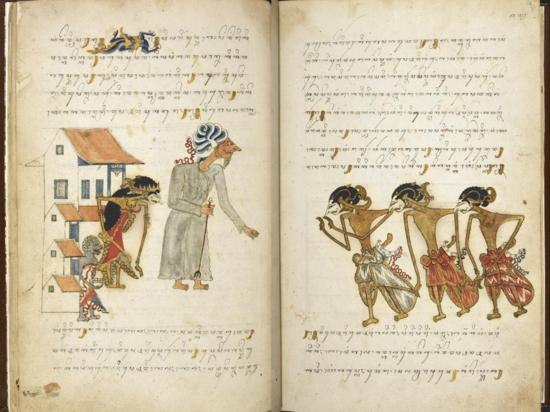 A Thai divination manual
This divination manual (phrommachat) from central Thailand is on public display for the first time. It contains horoscopes based on the Chinese zodiac, relating each lunar month to the animals of the 12-year-cycle and their reputed attributes (earth, wood, fire, iron, water) as well as a male or female avatar (representing the Chinese concepts of yin and yang). This manuscript from the 19th century also includes beautifully illustrated descriptions of lucky and unlucky matches of couples. The paintings on the left side depict the female avatar of the year of the pig riding on a blue hog, and illustrations of possible fates for people born in the year of the pig. On the right side we see a couple of ogres (phi suea) who will stay happily married until old age, whereas the relationship between a male ogre and a female angel (deva) is an unlucky one. 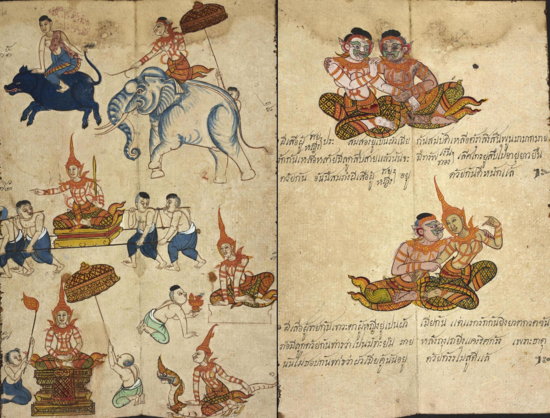 Scenes from the Burmese Ramayana
The highlight of the display is a manuscript book from Burma with large paintings stretching over several folios, illustrating the great epic of love and war Ramayana. It was created at the royal court, where a team of painters served.  The paper of this 19th century Burmese folding book of the Ramayana was handmade from mulberry bark. Shown here is the famous scene where Rama is lured away to shoot the golden deer.  Meanwhile, his wife Sita is captured by Ravana in the guise of an old hermit, after which he returns to his original form of a fearful ten-headed giant.
Dramatic performances of the Ramayana emerged in the Konbaung Period (1752-1885). The king’s minister Myawaddy Mingyi U Sa converted the Ramayana Jataka into a Burmese classical drama and he also composed accompanying music and songs. Ever since, Ramayana performances have been very popular in Burmese culture. 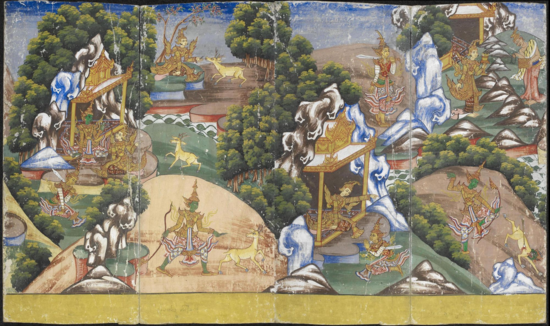 All three manuscripts in this new display have been fully digitised and can be viewed freely online through the British Library’s Digitised Manuscripts website.  Clicking on the highlighted links beneath each image will take you directly to the digitised manuscript.  Digitisation of these manuscripts was supported by the Henry Ginsburg Legacy, while the display cabinets were sponsored by the Royal Thai Government.

Jana Igunma, When an angel meets a demon: advice on love and relationships in a Thai divination manual. Asian & African studies blog, 7 January 2014.