A Malay document from the Aru Islands

Last year was the centenary of the death of Alfred Russel Wallace (1823-1913), whose contribution to the theory of evolution was as significant as that of Charles Darwin.  For Southeast Asianists, Wallace is of course best known as author of The Malay Archipelago (1869), a record of his detailed scientific observations in the Malay world. 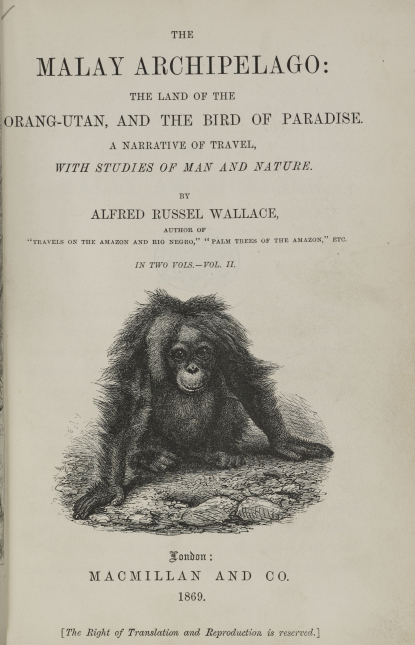 As part of the Wallace Centenary activites, the Natural History Museum launched the Wallace Letters Online project, aiming to document all letters to and from Wallace.  It was thus that early in 2013 I received a query about a small sheet of blue paper with writing in Malay in Jawi (Arabic) script (Add. MS. 46442, f.93), held among Wallace’s correspondence in the British Library. According to the Australian naturalist J. T. Cockerell, the document was given to him in 1872 in the Aru Islands in eastern Indonesia, where Wallace had spent six months from January to June 1857, as described in chapters 30-33 of The Malay Archipelago. Cockerell explains that the letter was to be forwarded to Wallace from its author, who had piloted Wallace up the Wanumbai Creek in Aru in 1857.

J.T. Cockerell was a professional naturalist from Australia, who was in Aru on an expedition to collect specimens from the field from 4 March to 15 December 1872.  In his journal for 3 May 1872, he recounts how he came into possession of the document: ‘The pilot now gave us to understand that he knew Mr. Wallace well, and had gone with him to Wannumbai: also that he had great respect for ‘the Englishman,’ in consequence of which he and his eldest son had taken the name of Wallace. He showed us a heavy silver-headed cane he had received from that gentleman, and which he seemed greatly to prize. When my son told him that he also knew Mr. Wallace, and had seen him lately, the pilot and his son kissed us all round three times on the forehead, and the old man said that he would write a letter in the Aru language stating the time of visit of Mr. Wallace, and where he went and what he did. The pilot performed his promise, and gave me one copy and asked me to forward the other to Mr. Wallace out of respect for ‘the Englishman’.” 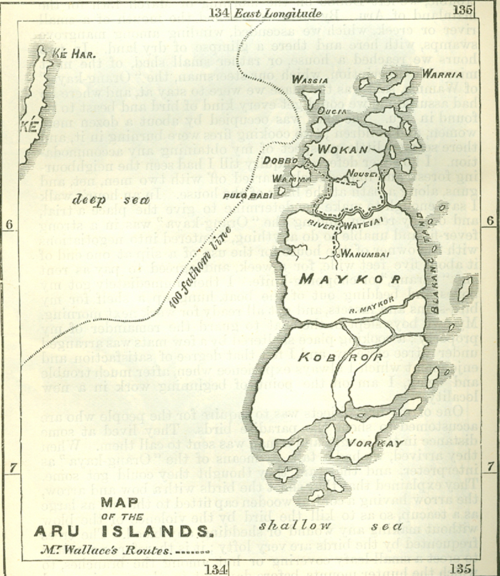 Wallace’s map of the Aru Islands, showing Wanumbai (Manumbai) in the centre of the island.  There are a number of inaccuracies in this map, as Cockerell noted. The Malay Archipelago, p. 338.

The document is of interest as the only known written Malay source from Aru.  It was written with care, but is extremely hard to decipher and to interpret, as reflected in the comments of those charged with reading it. In 1909 C.O. Blagden, lecturer in Malay at the School of Oriental and African Studies, University of London, wrote to W.W. Skeat that the letter was ‘an extreme specimen of bad writing in the Arabic character and bad spelling of Malay … I have read Malay MSS a many, & bad ones not a few, but as bad a one as this I never saw before, & I think it ought to be set at the next exam for the Malay bonus in the F.M.S.’, referring to the financial premium for Malay-language skills for civil servants in the Federated Malay States.  Skeat (author of Malay Magic, 1900), however, took a more nuanced view, and noted that it looked ‘as if the writer were trying unsuccessfully to reproduce some peculiarities in the local pronounciation, (‘p’ for ‘b’, for instance) because they are evidently not all accidental’. The problem is that although most of the individual words in this short document can be read, the overall meaning of the text can only be conjectured. 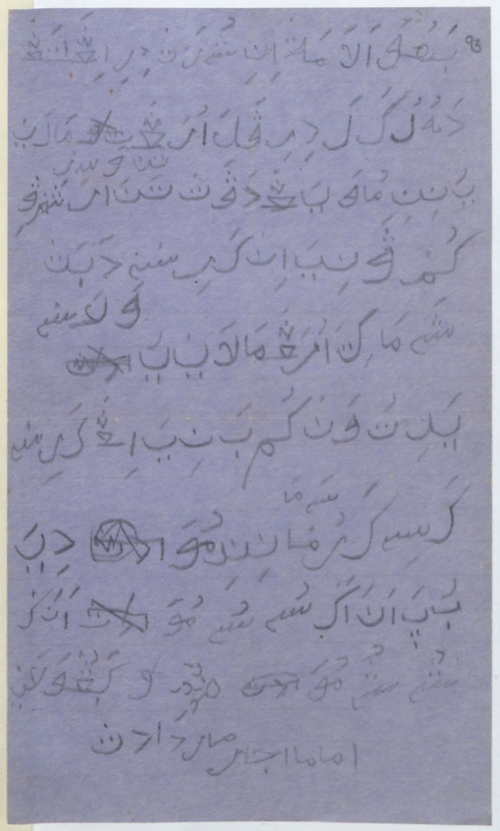 Cockerell’s impression of the author was of a man ‘of good education’ who frequently ‘took notes’ of all matters of interest, and who carried a ‘well-written and well-cared for manuscript book’, yet it is difficult to reconcile this image with the undeniably poor hand of the Jawi document.  Could it be that the pilot was perhaps more literate in Bugis/Makassar script, but chose to write in imperfect Jawi script as Malay was the language in which he had communicated with Wallace?  In any case, the Malay imam would doubtless have been gratified to know how much attention would be focussed on his words, so many years after they were inscribed.

[With thanks for comments and suggestions to George Beccaloni, Caroline Catchpole and Henri Chambert-Loir.]