The Mewar Ramayana is one of the most beautiful manuscripts in the world and has been digitally reunited after being split between organisations in the UK and India for over 150 years. The Indian epic Ramayana is one of the world's greatest and most enduring stories, telling the stirring tale of Prince Rama who was exiled for fourteen years through the plotting of his stepmother. In exile, his wife Sita is abducted by the ten-headed demon king Ravana; with the assistance of an army of monkeys and bears, Rama searches and rescues Sita. 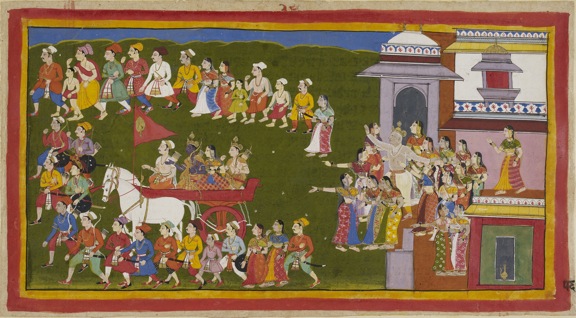 Through a major partnership between the British Library and CSMVS Museum in Mumbai, hundreds of folios, including 377 vividly illustrated paintings, of the Mewar Ramayana can now be viewed online. You can see the manuscript at www.bl.uk/ramayana.

For the first time, people around the world will be able to digitally explore the pages of the Mewar Ramayana manuscript, which was commissioned by Rana Jagat Singh I of Mewar in 1649 and produced in his court studio at Udaipur. The project, which has been three years in the making, is sponsored by the Jamsetji Tata Trust, the World Collections Programme, and the Friends of the British Library.

The Ramayana – “Rama’s journey” is attributed to the sage Valmiki and was composed some two and a half thousand years ago. Through oral tradition 20,000 verses continued to circulate from generation to generation, in the various languages of India and beyond. The story embodies the Hindu idea of dharma – duty, behaving correctly according to one’s position and role in society. 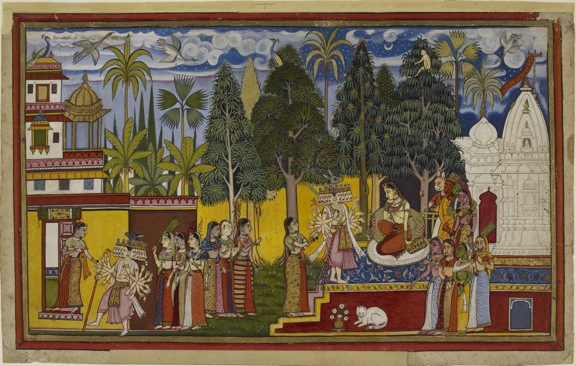 After more than 150 years after production, four volumes from this series were presented by Jagat Singh's descendant Maharana Bhim Singh of Mewar (1778-1828) to Lt. Col. James Tod (1782-1835), the first British Political Agent to the Western Rajput Courts in the early 19th century. In 1823, following his return to Britain, Tod presented the volumes to the royal bibliophile the Duke of Sussex (1773-1843) in 1823. Following the Duke's death, the content of his library went on sale in 1844, the four volumes were purchased by the British Museum, now the British Library. The remaining volumes became dispersed over time.

The digital Mewar Ramayana will enable users to ‘turn the pages' online in the unbound style reflecting the traditional Indian loose-leaf format, and interpretive text and audio will allow the broadest possible audience to study and enjoy this text in a whole new way. It will also transform access to the manuscript for researchers, who will have the text and paintings side by side in one place for the first time. The project has been led by British Library curator Marina Chellini with assistance from Leena Mitford, J.P. Losty and Pasquale Manzo.

This new version of 'Turning the Pages' is built in HTML5. It is not reliant on 'plugins' you need to install first, as with previous versions. It will work with the following browsers:

As it is a very large file, it may take a few minutes to download (depending on your broadband speed).

For the press release and additional images, please visit the British Library's Press and Policy page.