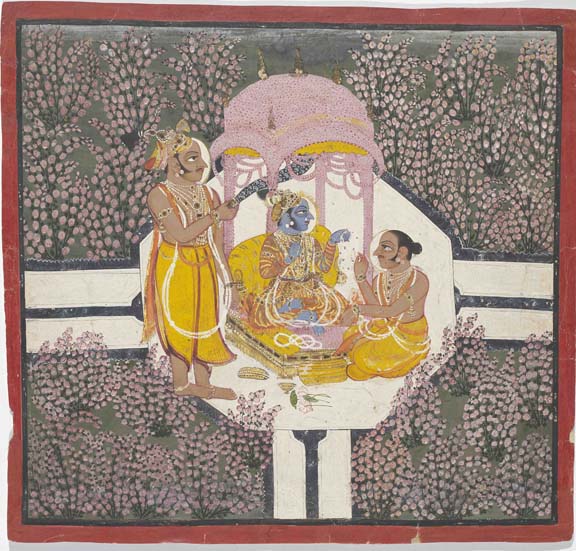 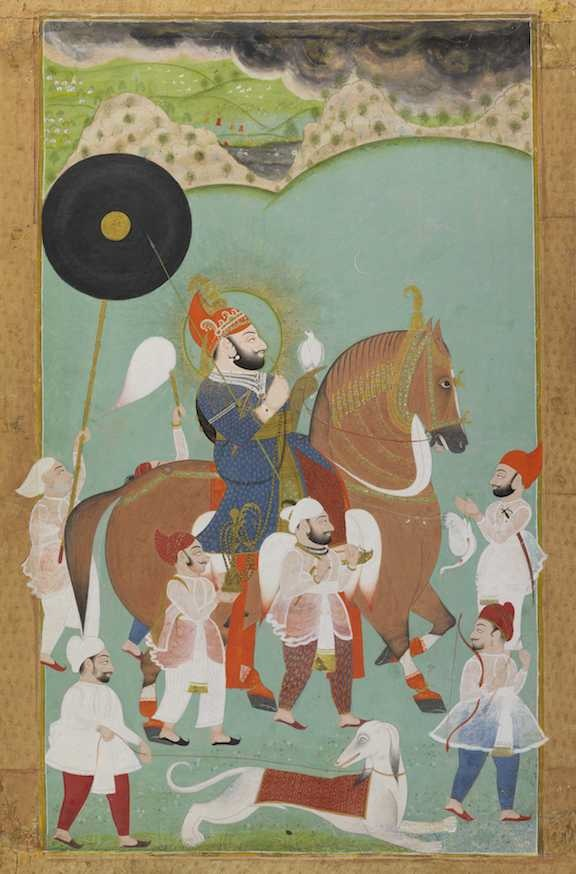 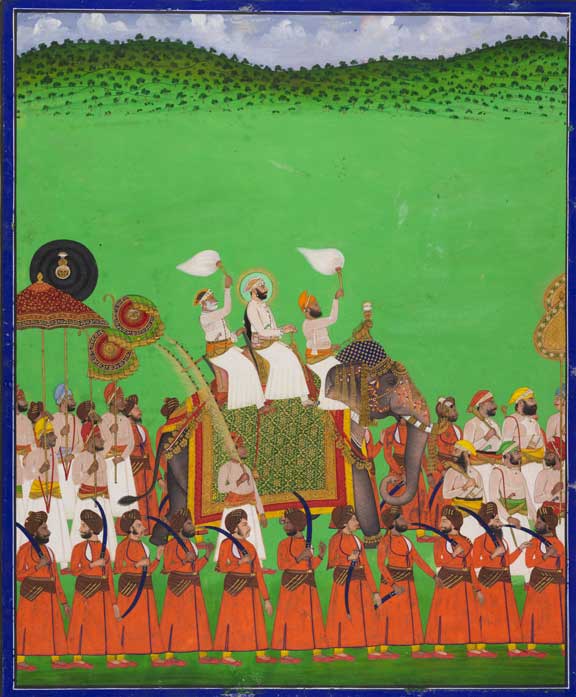 One of the manuscripts we have recently digitised is the Dārābnāmah, an illustrated prose romance describing the adventures of the Persian King Darab, son of Bahman, and Alexander the Great, originally composed in the 12th century by Muhammad ibn Hasan Abu Tahir Tarsusi. Our copy unfortunately only contains the first part of the epic, ending with the story of the Macedonian princess Nahid, Darab’s newly-wedded bride and the future mother of Alexander the Great, being returned unwanted (she had bad breath) but pregnant to her father Faylaqus (Philip of Macedon). 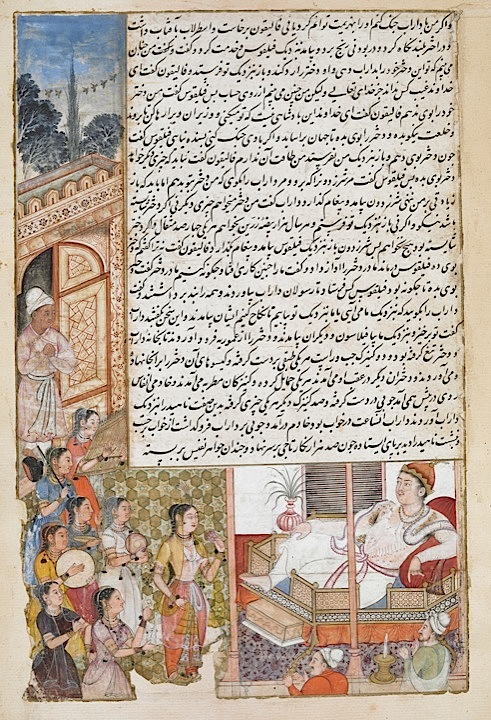 Drawing on Iranian folk literature, this collection of tales reflects a tradition of storytelling which has parallels with Firdawsi’s Shāhnāmah, written at the beginning of the 11th century. At the same time it has developed quite independently, linking pre-Islamic Iranian traditions with those of Islam and the west. The second part of the work, missing from this copy, is devoted to Iskandar/Alexander the Great and forms part of the Alexander romance, well known in both Persian and European literature. The first part of the work, however, has been comparatively understudied, so our digital version will hopefully facilitate some profitable research into this neglected area.

Our copy was probably completed between 1580 and 1585 for the Mughal Emperor Akbar. Classed as ‘Grade Two’ in the Mughal imperial library, it originally contained at least 200 paintings, and presumably there was also a second volume. By 1828, probably looted or sold, it belonged to the Nawabs of Awadh whose seals are stamped on the final leaf. When the British Museum purchased it from Quaritch in 1893, there were only 157 paintings and many leaves, including the colophon, were missing. 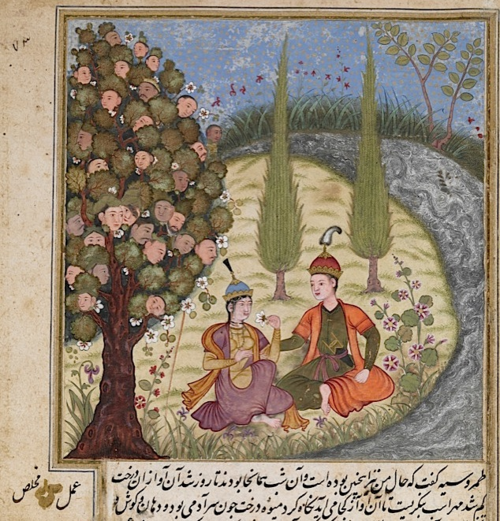 Tamrusiyah, temporarily separated from Darab,  and her brother Mihrasb under the Waqwaq Tree (a mythical tree which grew human heads as fruit). Artist: Mukhlis  (Or.4615, f 44r)

The paintings, created at a time when Mughal art was subject to Iranian, Indian and European influences, are what really distinguish this manuscript. Nearly all of them are ascribed altogether to  43 individual artists, several of whom were singled out by Abu’-Fazl in his chapter on the art of painting in the Āʼīn-i Akbarī. They include some of the most famous artists of Akbar’s reign. Details of their work and four separate paintings are described in the catalogue to the British Library’s recent exhibition ‘Mughal India: Art, Culture and Empire (Losty and Roy, 2012).

The plot of the Dārābnāmah is extremely complicated. The basic story tells of a prince, abandoned at birth and his subsequent adventures before he returns to Iran and claims the throne. His travels take him to kingdoms ruled by apes, one-eyed people, and others where he encounters all kinds of magical creatures including watermaidens, human-headed serpents and dragons.  In his article in Encyclopædia Iranica, William Hannaway gives a resumé, but unless some reader rises to the challenge, we’ll have to wait for a full translation! Particulars of the manuscript and a list of all the miniatures with links to the images can be seen here and on our Digital Persian Project page.

Here are a few more paintings to illustrate the story: 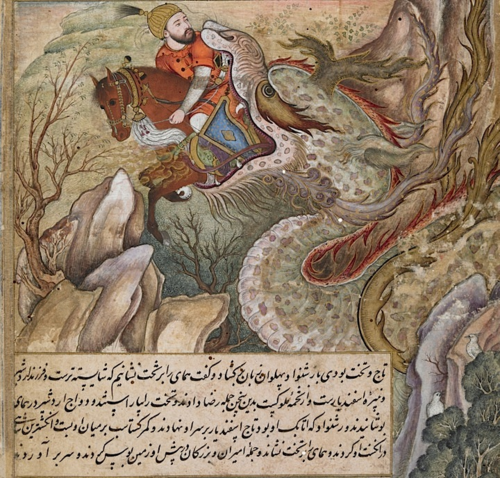 Near the beginning of the book, Bahman, son of the hero Isfandiyar, and his horse are swallowed by a dragon, and Humay (who is actually his daughter, but is pregnant with his child) becomes queen  (Or.4615, f 3v) 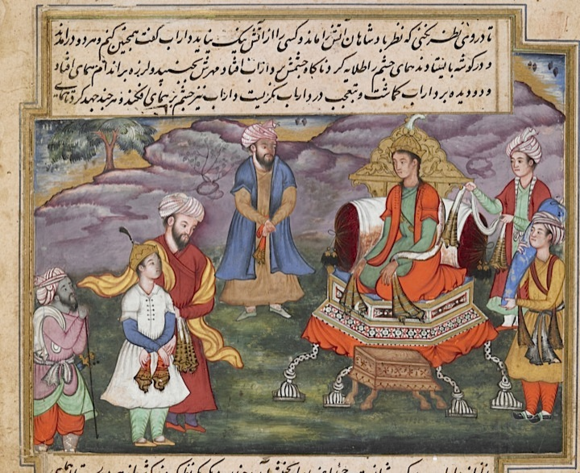 Abandoned at birth and rescued from the river by a washerman, Darab eventually meets his mother, Humay. Artist: Mithra (Or.4615, f 7v) 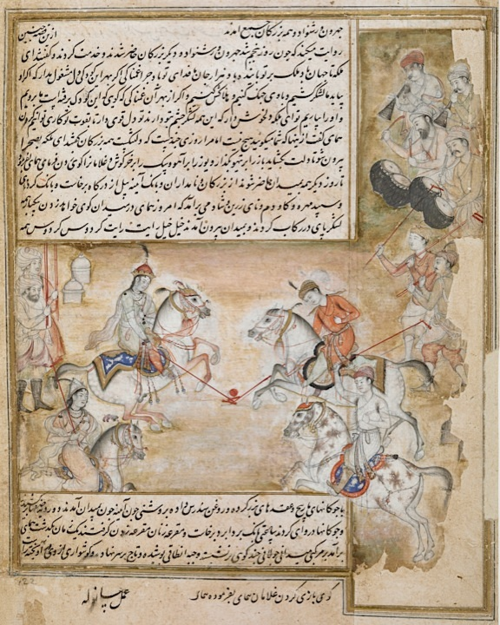 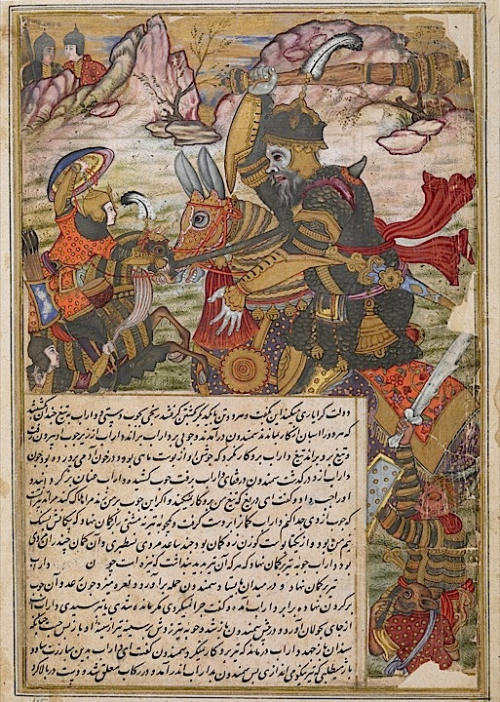 Darab continues on his travels. Here he is shown fighting the dīv, Samandun (Or.4615, f 17v) 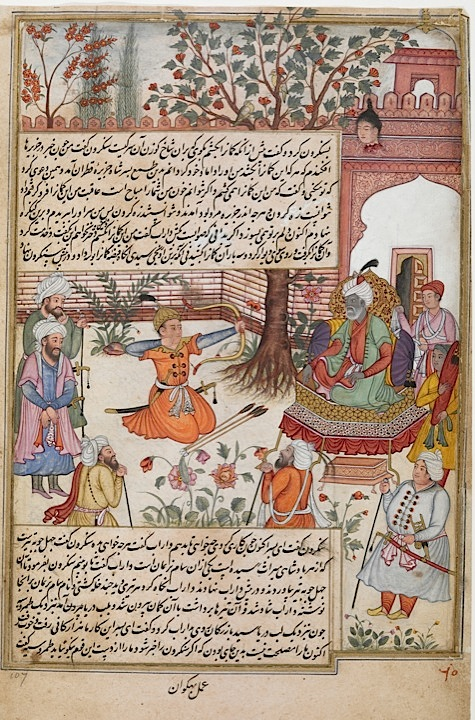 Darab meets and falls in love with the widowed queen Tamrusiyah who later becomes the mother of his son Darab/Dara. Together they continue travelling. In this scene Darab draws the mighty bow of Isfandiyar before Sangarun. The severed head of the son of the ruler of the Island of Katrun, beheaded because he failed to draw the bow, is fixed to the wall above. Artist: Bhagvan (Or.4615, f 25v) 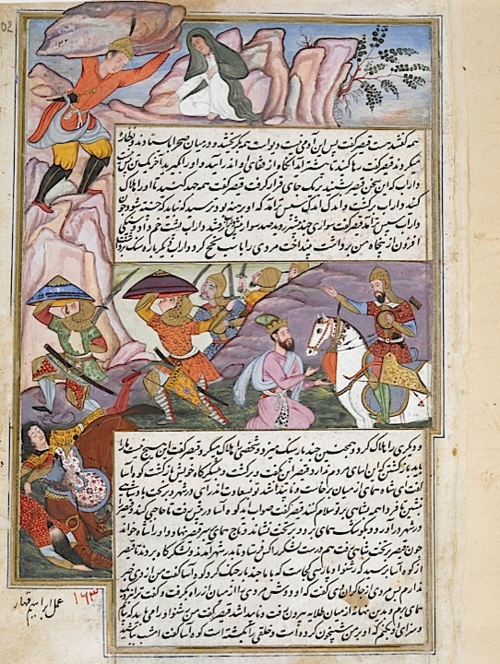 Darab goes to the rescue of his mother Queen Humay who has been captured by the Caesar of Rum (ie. the king of Macedonia). Here they hurl rocks at the king's army. Artist: Ibrahim Qahhar (Or.4615, f 102r) 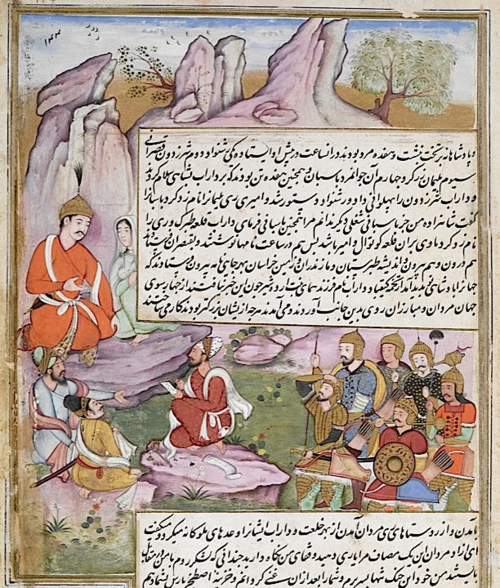 Posted by Ursula Sims-Williams at 6:50 PM