The road to Mandalay

The name of the British Library is in some ways a misnomer - we hold amazing collections from around the world, as the entries on this blog show. With a global collection that's important to so many people in so many places, comes a responsibility to work to enable people around the world to access the collections. Digitisation can be a wonderful way of enabling anyone, anywhere, to read manuscripts, books, or newspaper, and to see works of art, without having to come to London. Sometimes, library staff also travel, to tell people about our collections and encourage people to find out more about them.

Among the millions of items in the British Library are around 2,000 Burmese manuscripts – one of my favourites is Or.16761. There are also around 20,000 books from Myanmar, as well as photographs, newspapers, and the records of the Burma Office and India Office. We have long been in touch with colleagues in libraries in Myanmar, but last month we were able to do something that hasn't been possible for a number of years: to travel to Mandalay and Yangon, taking with us two displays about our collections.

The opening of a 19th century Burmese manuscript illustrating a variety of royal entertainments (Or.16761, ff 1-3r)

The displays featured two sets of material - photographs taken in Myanmar in the 19th century, and early books printed in, and about the languages of, Myanmar. Because we knew that one of the displays would be outdoors, the displays used images rather than including the original books and photographs, but the high-resolution scans and photographs used meant that the facsimiles could be extremely high-quality, and enabled people to get up close and examine the images in detail. We’ve done similar ‘facsimile’ exhibitions recently – as you can see on previous blog posts – in Kabul and Delhi. 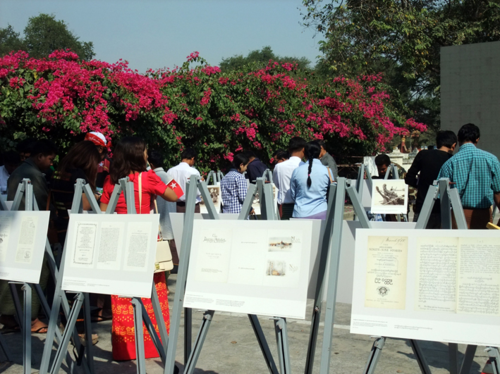 Visitors at the displays at the Irrawaddy Literary Festival, Mandalay. © British Library

The first venue for the displays was the Irrawaddy Literary Festival, which this year took place in Mandalay. Despite a last-minute change of venue from the Kuthodaw Pagoda to a nearby hotel, thousands of people came to the literary festival. It was probably the first time we've done a display in a car park, but the response from the estimated 3,500 visitors who came to see the Library's displays made all the hard work (and the heat and dust outside) worth it. Many of the photographs and books in the pictures had not been seen in Myanmar before, or not for some years, and people often stopped to ask us questions, or to take photographs of the displays for future reference. Some visitors returned the next day with their friends and families, and at one point a group of tour guides came to see the old photographs of the places to which they regularly took tourists. 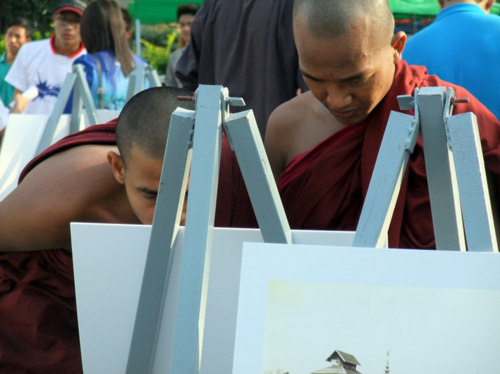 Two monks getting up close to see the details of the old photographs. © British Library

After a busy three days, we packed up the displays and drove to Yangon, to set up in our second venue: the Universities' Central Library on the main campus of the University of Yangon. The campus has been closed for years, and only recently reopened to students, but there's already significant investment in improving the facilities, and rejuvenating the campus and faculties. The Universities' Central Library has its own hugely important collection of books and manuscripts, and cases in the marble-clad lobby showing some of these. After we had been treated to a tour of the library and its collections, we installed the displays in lobby and welcomed friends old and new to the opening ceremony. 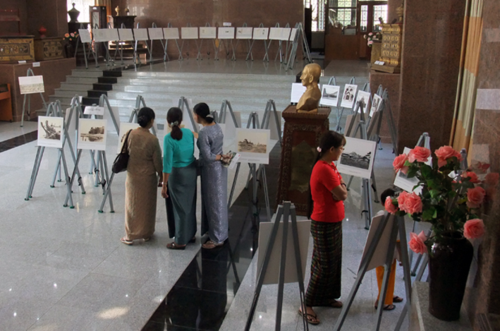 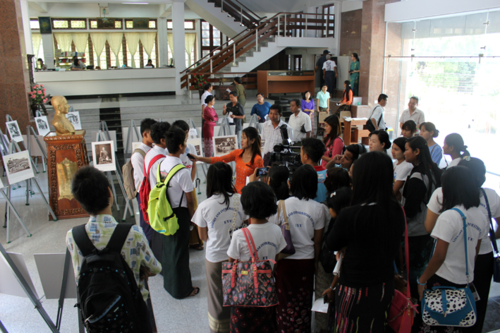 Thousands of visitors came to see the displays in Yangon, and we’ve left the panels there, so it’s possible that they will be shown again in the future, perhaps in other venues. Meanwhile, we're starting to think about what's next - and looking forward to future projects in partnership with our colleagues in Myanmar, whether they involve digitisation, displays, or something else entirely. Watch this space!