We previously alerted our readers to a landmark digitisation project aimed at opening up the British Library’s invaluable repository of Hebrew manuscripts (Opening up the Hebrew Manuscript Collection). Over a three-year period 1250 objects from this outstanding collection, comprising well over 3000 manuscripts, would be made freely available online.

The project has been made possible by a £1.2 million lead grant from the Polonsky Foundation. This significant award has provided a springboard for attracting additional funding for this ground-breaking initiative.

I am delighted that these important and beautiful treasures have been made more widely available for the public to enjoy. I look forward to seeing the entire collection online and freely accessible in the future. 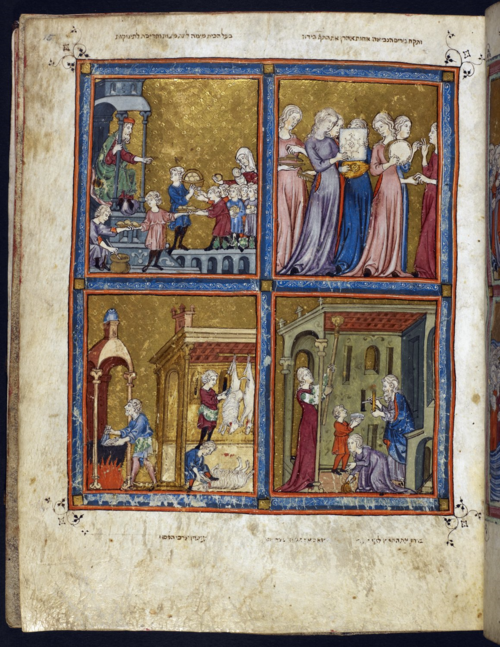 We are very pleased to announce the launch of the first 45 Hebrew manuscripts on the Library’s Digitised Manuscripts site.  The Hebrew Bible or Tanakh  features prominently within this small corpus of handwritten books.  Tanakh is an acronym based on the first letters of each of the sections that make up the Hebrew Bible, namely Torah (Pentateuch or Five Books of Moses), Neviyim (Prophets) and Ketuvim (Writings).  The Torah is considered the most sacred part of the Hebrew Bible, because, according to tradition, Moses wrote it at divine dictation. 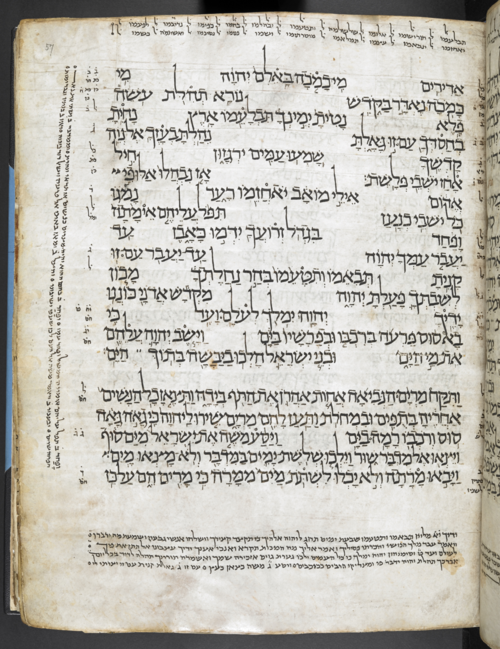 Among the released biblical treasures viewable on the Digitised manuscripts site is the London Codex (Or. 4445) one of the oldest surviving Hebrew Bibles.  This manuscript bears great similarities with the Aleppo Codex (930 AD) and the  Leningrad Codex (1008-1010 AD), held respectively in Jerusalem and St. Petersburg.

It  contains the masoretic notation compiled by Aaron Ben Asher, a tenth-century scholar from Tiberias, Palestine.  Ben Asher’s notation is considered to be the most authoritative masoretic version extant.  The Masorah is a body of rules of pronunciation, spelling, vocalization and intonation of the scriptural text, intended to preserve it and transmit it correctly. 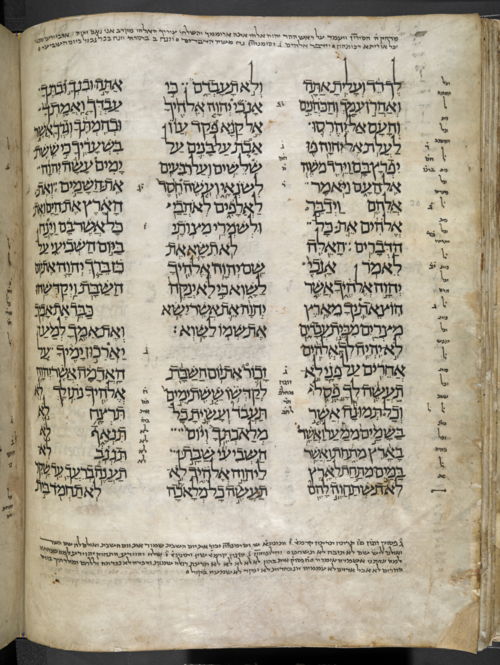 The Ten Commandments (Exodus 20), one of the earliest codes of religious and moral precepts. The London Codex BL MS Or. 4445, f. 61v

The London Codex was probably copied in Egypt or Palestine around the 10th century. The more recent paper additions with Yemenite square script are from the 16th century. As its colophon is missing, the exact date and place of its creation are unknown. The scriptural text was penned in a neat oriental square script in three columns per page.  The masoretic notation was copied above, beneath and in between the textual columns.  The scribe’s name Nissi ben Daniel, who apparently was also the punctuator, is embedded in the masoretic rubrics on folios 40r, 113v, 139r.  The manuscript was acquired by the British Museum in 1891 from a private collector. 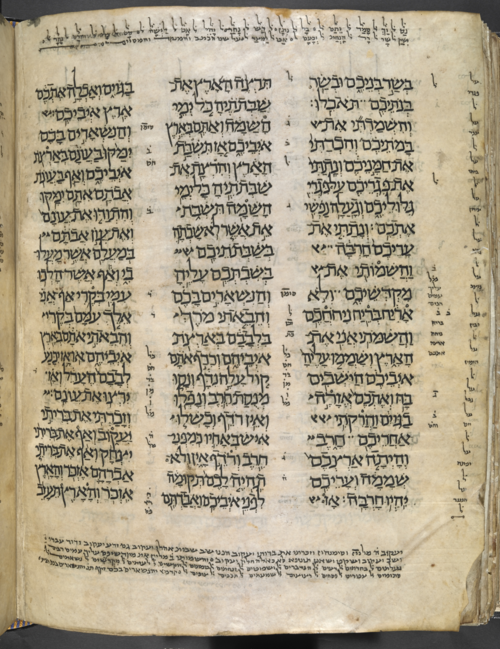 With the Jewish Passover approaching, we are also thrilled to launch digitally the Golden Haggadah (Add. 27210), one of the finest surviving Haggdah manuscripts from medieval Spain and the British Library’s most famous Hebraic treasure.   Haggadah, which literally means ‘telling’, is the service book for Passover Eve recounting the story of the Israelites’ miraculous  liberation from slavery in Egypt. Created in Catalonia, probably in or near Barcelona around 1320 AD, this elegant manuscript written and illuminated on vellum, consists of three distinct parts: a series of small illustrations (miniatures) depicting biblical scenes, the Haggadah text, and religious poems for the Passover festival. 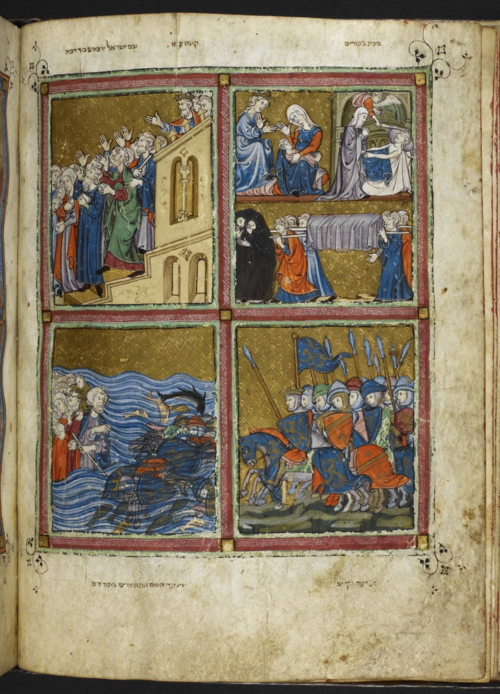 The sumptuous illuminations found in the preliminary section of the manuscript (fourteen full pages of miniatures) are set against gold-tooled backgrounds, and have earned the manuscript its name.  They were executed by two unnamed artists in the Gothic style common in Europe at the time.  Gothic style decorations also embellish the Hebrew text in the second part of the manuscript and include foliage scrollwork, illuminated words, zoomorphic letters and text illustrations of significant Passover symbols. 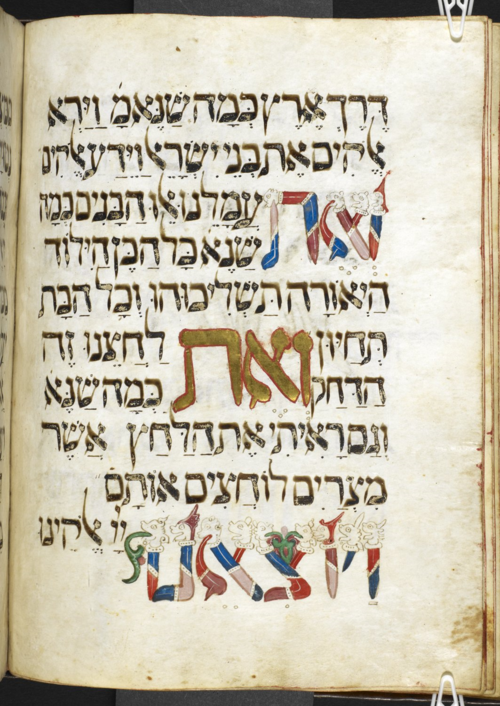 Zoomorphic lettering with dogs and rabbits spelling ve-yotsiany (and we were taken out [of Egypt]…). The Golden Haggadah, BL MS Add. 27210, f. 36v

The manuscript's earliest known owner was Joav Gallico, Rabbi in Mantua in 1602 and formerly a judge in Governolo.  The Golden Haggadah was a wedding gift to Eliah Rava who married Gallico’s daughter, Rosa, in Carpi, on 25th October 1602, as recorded on the title page added on a blank page in the manuscript. 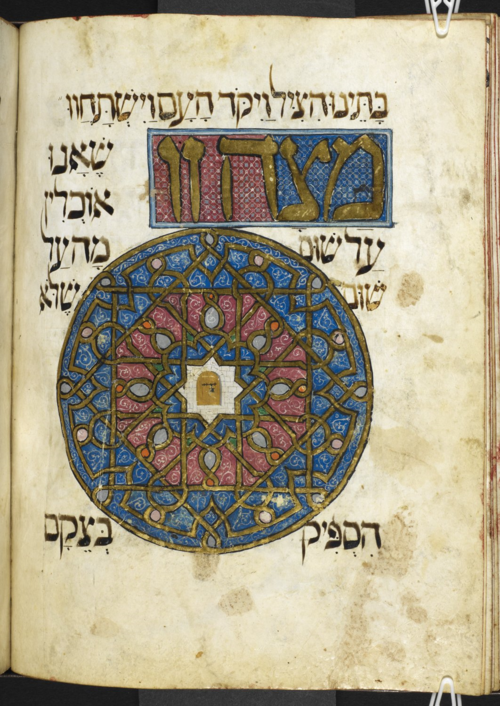 The Matsah (unleavened bread), one of the obligatory foods consumed during the Passover festival. The Golden Haggadah, BL MS Add. 27210, f. 44v

The last private owner of this gem was Joseph (Giuseppe) Almanzi (1801-1860), an Italian-Jewish poet, born in Padua, who was an avid collector of rare books and manuscripts.  We do not know when the Golden Haggadah entered  Almanzi’s manuscript collection, which was bought in 1864 by the British Museum, and now belongs to the British Library. 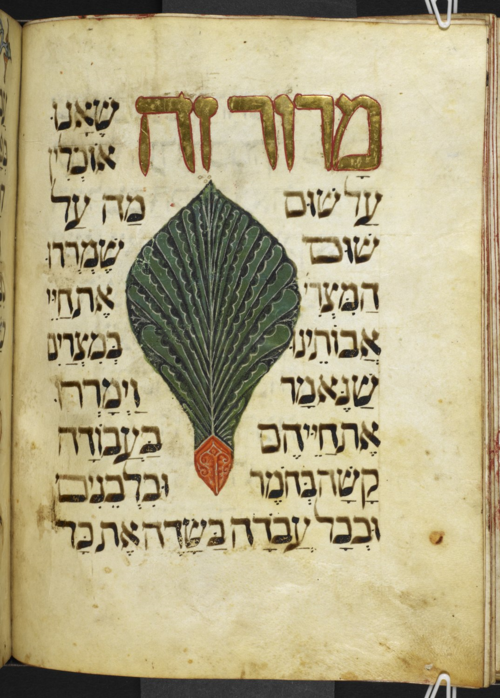 The Maror (bitter herb) which symbolises the hard life endured by the Israelites while in Egyptian bondage. The Golden Haggadah, BL MS Add. 27210, f. 45v

Posted by Ursula Sims-Williams at 3:27 PM