Regular followers of this blog will know through the Mewar Ramayana Digitally Reunited blog post that recently we were delighted to join with Chhatrapati Shivaji Maharaj Vastu Sangrahalay (CSMVS Musuem), Mumbai, in announcing the launch of the digitised Mewar Ramayana manuscript. The Ramayana is one of the great epic stories of the world, with a unique universal human appeal. This particular manuscript, commissioned by Maharana Jagat Singh of Mewar in the mid-17th century, is widely regarded as one of the finest, most lavishly-illustrated copies of the epic ever made.

As our first major collaborative project with partners in India, the launch of the digitised Mewar Ramayana marks a significant early milestone in our aim to make parts of our extensive collections relating to South Asia freely available online, for people all around the world to study, admire and enjoy.

It was both to celebrate the launch with CSMVS at a reception on 21 March, and to discuss future collaborations with CSMVS and other partners in India, that a small BL contingent set off for Mumbai: Baroness Tessa Blackstone (Chairman of the Board), Roly Keating (Chief Executive), Marina Chellini (project curator), Jerry Losty (project consultant, see Curator’s perspective: accessing the Mewar Ramayana), Kate Losty (a conservator by training, and as Jerry’s wife, as engaged with the Mewar Ramayana as he), and myself. 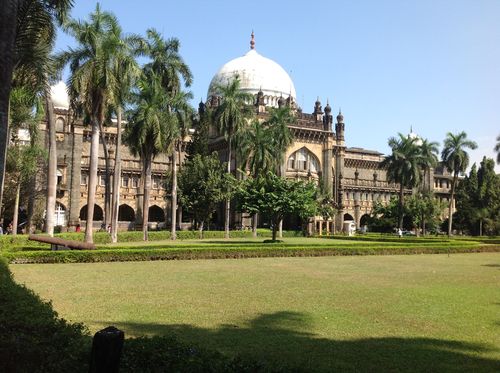 Our CSMVS colleagues and friends, in particular Sabyasachi Mukherjee (Director General), Vandana Prapanna (project curator), Roda Ahluwalia (project consultant), Manisha Nene (curator), and Koumudi Malladi (coordinator, DG’s office), had ensured a memorable evening’s programme for the launch! It began with refreshments for some 120 guests under the watchful eye of Jamsetji Tata, whose bust graced the lobby of Coomaraswamy Hall. This felt particularly apt, since it was partly due to the generous support of the Jamsetji Tata Trust that the project could happen. 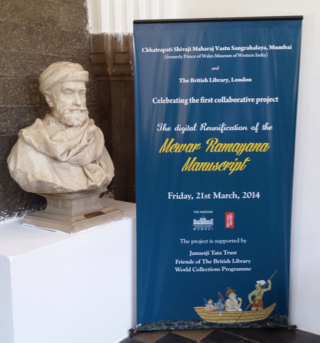 The statue of Jamsetji Tata fittingly presides over the launch.

Brief speeches by Sabyasachi Mukherjee, Baroness Blackstone, Kumar Iyer (British Deputy High Commissioner) and Roly Keating focussed on the deep historical ties between India and the UK, and the importance of international collaboration in building on these to ensure greater access to cultural treasures. These sentiments were beautifully encapsulated by honoured guest Shriji Arvind Singh Mewar, the Maharana of Udaipur, whose ancestor Rana Bhim Singh first donated the part of the manuscript now held at the British Library to Lt. Col. James Tod, British Political Agent and noted historian, in the early 19th century. Speculating as to his ancestor’s motivations in presenting the folios to Tod, Shriji concluded that the gift was symptomatic of the strong, cultural link between India and Britain, a link further strengthened by the ‘conduit of shared values’ demonstrated by the CSMVS-BL collaboration. 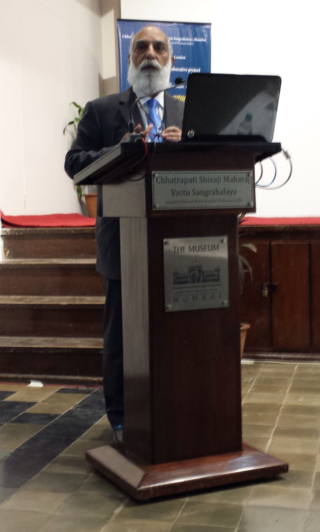 The digital Mewar Ramayana was unveiled by Marina Chellini, who talked the audience through the special features of the resource, in the shaping and creating of which she had played such a leading role, whilst Vandana Prapanna provided fascinating insights into the project from the perspective of CSMVS. In the focal point of the evening, art historians Jerry Losty and Roda Ahluwalia delivered illustrated lectures, Jerry Losty concentrating on the immense artistic importance of the Mewar Ramayana, and Roda Ahluwalia exploring its significance in relation to other Ramayanas and to the Rajput manuscript tradition.

A lamp-lighting ceremony to inaugurate The Balakanda of the Mewar Ramayana in the Curator’s Gallery followed. Not to be missed by those fortunate enough to be in Mumbai, this exhibition displays original folios from the manuscript held at CSMVS, cleverly juxtaposing them with an animated digital folio projected on the wall, and the reunited digital resource on a kiosk to one side. Celebrations were brought to a close with a dinner at Bombay Gymkhana, very generously hosted by the Chairman and Director General of CSMVS.

BL Chairman of the Board, Baroness Tessa Blackstone, at the lamp-lighting ceremony

After meetings with Sabyasachi Mukherjee the following morning to discuss exciting plans for the next CSMVS-BL joint endeavour and tours of the museum and conservation studio, the BL contingent went their separate ways. For Baroness Blackstone, Roly Keating and me, ‘work’ had just begun, with a further four days of meetings scheduled with partners in Mumbai and Kolkata. But that’s for another post. 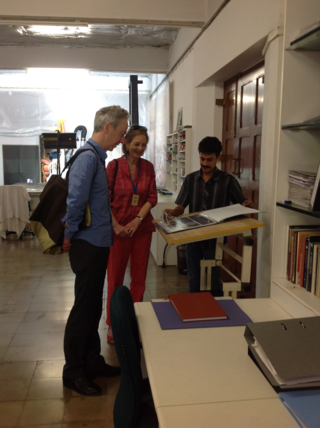 In the meantime, our sincere thanks go to CSMVS, who in the course of this project have become friends as well as international colleagues. We look forward to many similar successes in the future!

And finally, we hope that you, our readers - whether via pc, tablet or phone, on the move or in the comfort of your own homes - will continue to study and enjoy this unique resource! You can explore the manuscript by going to www.bl.uk/ramayana or http://csmvs.in/the-mewar-ramayana.html.

Fantastic! Only good things can come of this excellent initiative.