The word ‘seal’ can refer to two quite distinct, yet related, entities: the object used for stamping, sometimes called the ‘seal matrix’, and the seal impression, also called a ‘seal stamp’ or ‘sealing’, which refers to the mark made by the seal matrix.  Seal matrices are usually made of a hard material such as metal or gemstone, and may be set in a ring, and are most commonly found in museum collections.  Seal impressions, on the other hand, are found on manuscript documents or books, and are thus usually encountered in libraries and archives - as illustrated by a recent blog post on the 'Islamic' seals used by British colonial officials, found impressed on documents in the India Office Records. 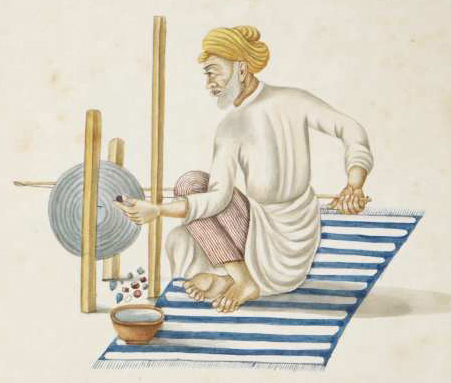 It was therefore a very natural partnership when the British Library and British Museum came together in 2010 to produce a travelling photographic exhibition, Lasting Impressions: Seals from the Islamic World, supported by the Heritage Lottery Fund.  The British Museum’s rich collection of seals with inscriptions in Arabic and Persian, made of materials such as carnelian, onyx, turquoise and rock crystal as well as brass and silver, were complemented by royal letters, treaties and books bearing Islamic seal impressions from the British Library. The exhibition toured libraries and museums throughout the UK, and led to a further collaboration with the Islamic Arts Museum Malaysia in Kuala Lumpur in 2012.

I was therefore very surprised when, in late 2011, my colleagues in the British Library’s Philatelic Collections, David Beech and Paul Skinner, mentioned in passing that the Library, too, had a small collection of Islamic seal matrices, alongside other European seals and philatelic paraphernalia. On further investigation there turned out to be ten metal seal matrices with inscriptions in Arabic script, unaccompanied, however, by any information on their provenance. On the basis of the calligraphy and style of inscription, nearly all the seals appear to be Ottoman, and all but one are dated.  A catalogue of the 10 seals, by A.T. Gallop and M.I. Waley, can be found here: Download BL Philatelic Collections Islamic seals-ATG-MIW. 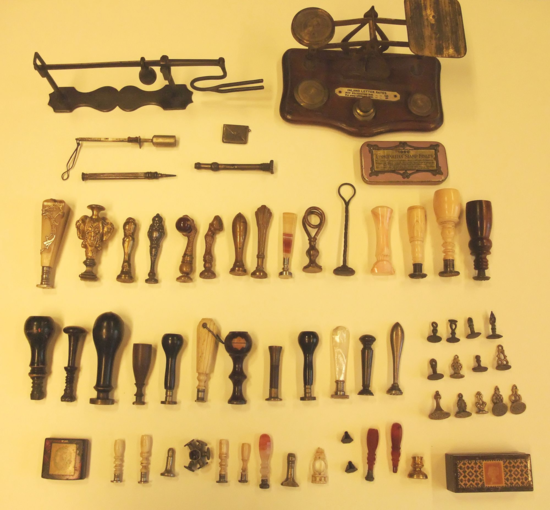 Seals and other objects in the Philatelic Collections of the British Library.  The ten seals with inscriptions in Arabic are in the cluster on the right. 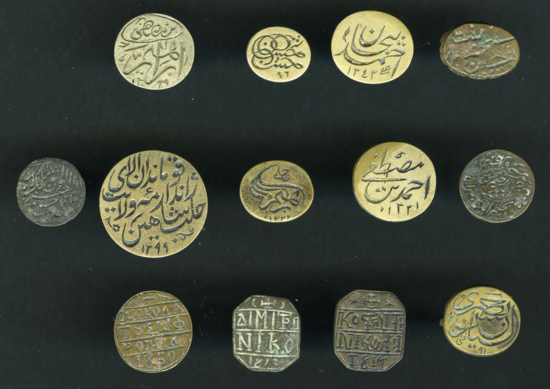 The ten Islamic seals, together with three others in Greek.  British Library, Philatelic Collections.

In Ottoman Turkey, seal engraving was a well established and highly regulated profession. Seal engravers belonged to professional guilds, and had to adhere to a strict code of practice, designed to prevent the fraudulent use of seals.  In the early seventeenth century there were separate guilds for engravers who worked in semi-precious stones such as carnelians and jade, those who produced seals for the officials of the state, and those who worked in silver, producing talismans as well as seals.  From the late eighteenth century and into the early twentieth century some Istanbul sealmakers engraved their pseudonymous signatures in tiny letters on the face of the seal.  It is therefore of great interest to find that three seals in the British Library collection appear to bear the initials/signatures of their engravers, two of which occur in the list of Ottoman seal engravers’ signatures published in Acar (1999: 290-295).  These signatures are always written in much smaller letters than the main inscription. 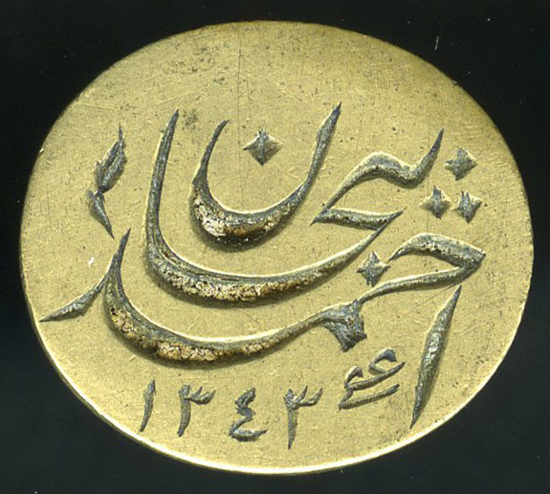 Ottoman brass seal, engraved with the name Ahmad Bijan / Ahmed Bican and the date 1343 (AD 1924/5), with in the bottom right corner the tiny signature of its maker ‘Aşki, one of the seal engravers listed by Acar (1999: 295). Width 17 mm. British Library, Philatelic Collections, Islamic seal 10.