Romeo and Juliet in Thai

If you were in Bangkok about a century ago and you were going to a theatre performance, the last thing you would expect is a play by Shakespeare. But you might be surprised to find out that this was very much a possibility, and it was equally possible to recognise the Thai king as one of the actors on stage.

King Vajiravudh (Rama VI, 1910-25) was a true fan of Shakespeare and translated several of his works into Thai. He also made great efforts to ensure that Shakespeare’s plays found their way into Thai theatres and by doing so he introduced Western/modern forms of theatre into Thailand. He often stood on the stage himself as he had a passion for acting that he had developed as a young student in England. Immediate family members were encouraged to join him on stage.

The Cheltenham Chronicle and Glo’shire Graphic reported on 30 August 1902 about the young Crown Prince Vajiravudh that “the Prince has recently appeared in another role – that of amateur actor and playwright - at an ‘At Home’ at Westbury Court… The stage name of the heir to the Siamese Crown is ‘Carlton H. Terris’, and he actually performed in three plays – ‘In Honour Bound’, ‘Old Cronies’, and ‘The King’s Command’, the latter being from his pen.” 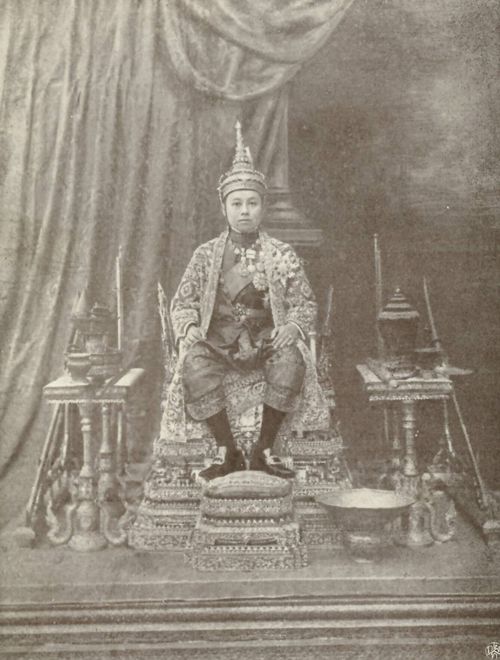 King Vajiravudh was born on January 1, 1881 being the second son and successor of King Chulalongkorn (Rama V). At the early age of 12, he was sent to Sandhurst Royal Military College and then moved to Oxford University to study history, administration and law. Altogether, he spent nine years in England. Following the death of his elder half-brother, Crown Prince Maha Vajirunhis in 1895, Prince Vajiravudh succeeded as Crown Prince and eventually ascended the throne after his father King Rama V deceased on 23 October 1910. He was the first Thai king to be educated abroad. The long time as a student in England had a considerable and lasting influence on his love of literary and performing arts. In many of his works, he emphasised the value of the press, and of reading in general. 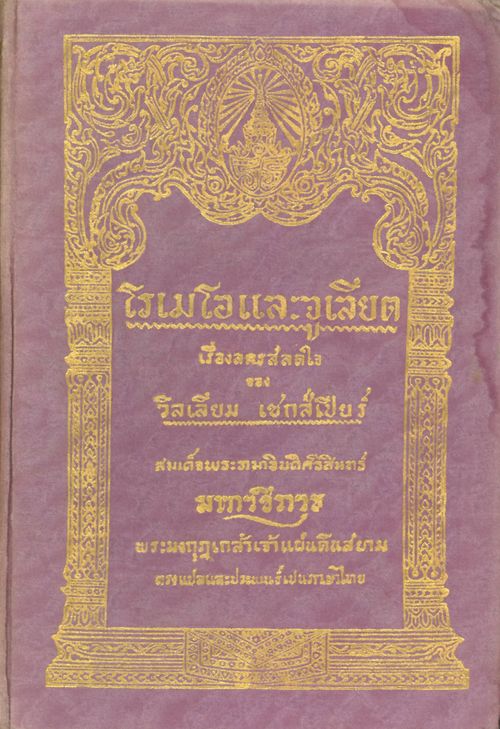 Romeo and Juliet in Thai, translated by King Vajiravudh. The book was printed in 1922 and bound in a lavender coloured silk cover embossed with gilt (Siam.279)

His most important translations into Thai are Shakespeare’s “Romeo and Juliet” (Siam.279), “As you like it” (Siam.330/421), and “The Merchant of Venice” (Siam.275/7). His excellence in this field earned him the name “Maha thiraraja”, meaning “philosopher king”. Due to the fact that many of his contemporaries did not see the purpose in his activities as an author, playwright and actor – the latter being indeed very unusual for a Thai king - he decided to write and perform under different pseudonyms, like for example Si Ayutthaya, Asvabhahu, Tom Toby, or Carlton H. Terris. Altogether, King Vajiravudh used more than 40 pseudonyms (known to date). 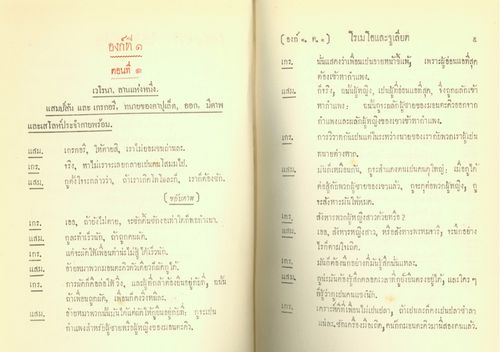 Beginning of the first act of Romeo and Juliet in Thai, translated by King Vajiravudh (Siam.279, pp. 4-5)

The publication of Thai literary works and translations of Western literature and theatre plays into Thai reached a first climax with King Vajiravudh as author and translator himself.  He stood out for his considerable contribution to Thai literature and the performing arts, and was the first one to classify Thai theatre into two types, the Khon and Lakhon.

In "A Descriptive Catalogue of the Siamese Section at the International Exhibition of Industry and Labour" (Turin, 1911) he wrote: “The theatre where the Khon and Lakon are performed ... possesses the beautiful simplicity of an ancient Greek theatre ... neither stage nor scenery is required ... Costumes and properties however, are very elaborate, and are made as accurately as possible. The costumes are made to resemble those worn in Siam in olden times, and have not changed during successive generations, because they have been found most picturesque and suitable. Queens or royal personages wear crowns or coronets; others have various kinds of headdresses suitable to their rank and station. Character parts, such as demons, monkeys, or yogis wear distinctive masks of different colours and designs. Each mask is a good example of Siamese decorative art, and is distinctive and characteristic, so that each character may at once be recognized by the mask worn by the actor.”

In addition to these traditional theatre forms, he helped to popularise modern dance-drama, spoken drama (lakhon phut) and sung drama (lakhon rong) in Siam as a way to prepare the people of his country for the modern world.

The British Library has a collection of over 120 first editions and reprints of King Vajiravudh’s works, including the above mentioned three translations of Shakespeare’s plays into Thai.