Sermons in the Malay world

I recently wrote about how the Indonesian and Malay manuscript collections digitised through the Endangered Archives Programme are changing our perceptions of the written landscape of maritime Southeast Asia.  Today I would like to focus on one genre of Islamic manuscripts from the Malay world previously all but unrepresented in any British collection. These are manuscripts containing khutbah, or sermons, written in Arabic with occasional elements in Malay, designed to be read at the Friday congregational prayer or on special occasions such as marriages or the two great feasts of Islam: Id al-Adha, the feast of the Sacrifice, and Id al-Fitr, at the end of the fasting month of Ramadhan. The British Library holds just one khutbah manuscript from Southeast Asia, acquired in 1990 (Or.15924).  It is written in scroll form, with rather garish illuminated frames and a cloth headpiece, and is stored in a bamboo container.  The presence of a very similar example in the Mataram Museum suggests a Lombok provenance. 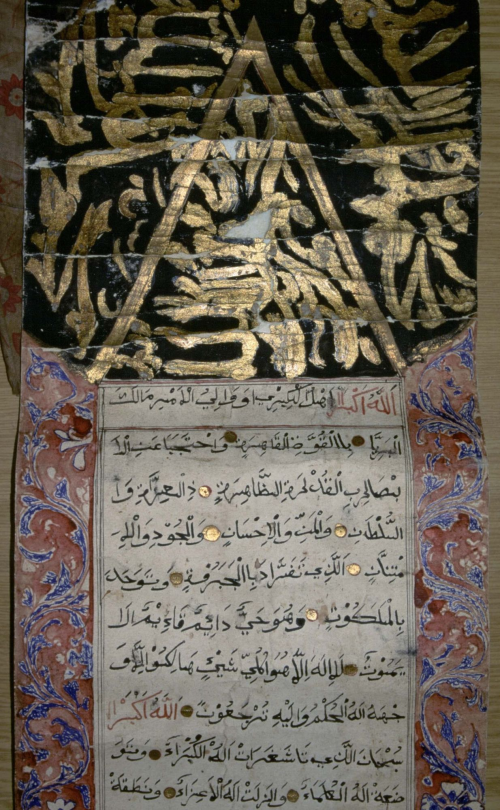 In early Islamic states, the mention of a ruler’s name in the sermon was one of the two prerogatives of a Muslim sovereign (the other being the right to mint coins).  Elizabeth Lambourn (2008 & 2011) has recently highlighted how the offer to cite a ruler’s name in the Friday sermon could be used as a bargaining tool in negotiations between the great Islamic empires and the coastal communities that fringed the Indian Ocean: khutbah were traded for cannon.  The research project Islam, Trade and Politics across the Indian Ocean, investigating Ottoman links with Southeast Asia, has found evidence that the citation of the Ottoman sultan’s name in sermons was used by Malay rulers in the late 19th century to support claims to Ottoman overlordship and thence entitlement to protection against western colonial powers.

The first Islamic sermons from Southeast Asia to be published originate from Sulu in the southern Philippines.  One is a Friday sermon and the other a sermon for the feast of Ramadan, copied in 1903 and citing the name of Sultan Muhammad ‘Pudhalun’ (Fadl) (r.1824-1862), son of the late Muhammad Jamalul Kiram (r.1823-1842), and asking for blessings on former sultans of Sulu. As seen from photographs published in 1905 by the Lebanese-American scholar Najib Saleeby (1973: 101-107, Plates XI-XVI), each sermon was written in book form with the first two pages set in beautiful decorative frames.

It was only with the arrival in the British Library of digitised collections of Indonesian manuscripts through the Endangered Archives Programme that large numbers of khutbah manuscripts from Southeast Asia are at last available for study.  Project EAP329: Digitising private collections of Acehnese manuscripts located in Pidie and Aceh Besar regencies, led by Dr Fakhriati M. Thahir, includes three volumes of khutbah from Aceh. 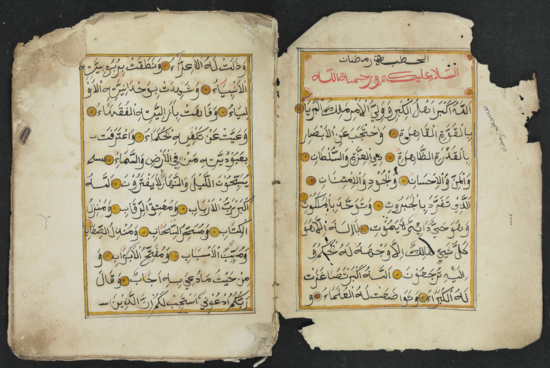 Sermon for Ramadhan, from an illuminated compilation of khutbah texts. Unusually (but not unprecedentedly) for a MS from Aceh, this has some headings in Javanese. EAP329/1/62.

More significant, though, is project EAP276: Documentation and preservation of Ambon manuscripts, led by Prof. Titik Pudjiastuti of Universitas Indonesia, which digitised 12 private collections of 182 mostly Islamic manuscripts in Ambon and the neighbouring island of Haruku in the Moluccas, of which no fewer than 45 are sermons. Intriguingly, just like the Lombok sermon in the BL and in contrast to the Aceh sermons, all are scrolls, which is actually a very unusual format for manuscripts in the Malay world. Said to date from the 18th to the 20th centuries, many are relatively recent, with one sermon dated 2002.  Yet of the earlier sermons, it is notable that some cite the names of sultans of Ternate dating from the 17th back to the late 14th centuries, suggesting the preservation of a much older tradition, and one which will repay further study.  Reproduced below is a selection of khutbah manuscripts from Ambon. 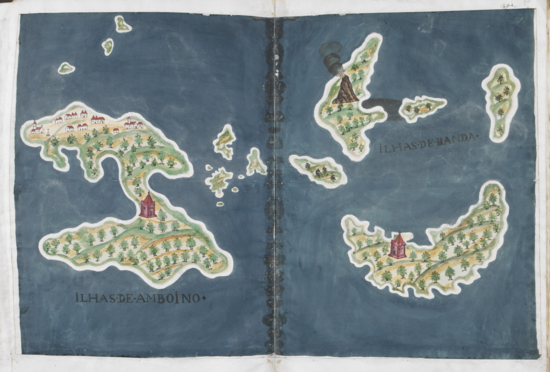 Sermon for Id al-Fitr, with pink headcloth and bamboo case, written by Rahman Ali Salampessy, late 20th c.  At the beginning, the writer has used small circles to indicate the number of times the takbir (the phrase Allah Akbar, ‘God is greatest’) should be repeated at the start of the sermon: seven times in the second line, and five times in the third line.  EAP276/8/5. 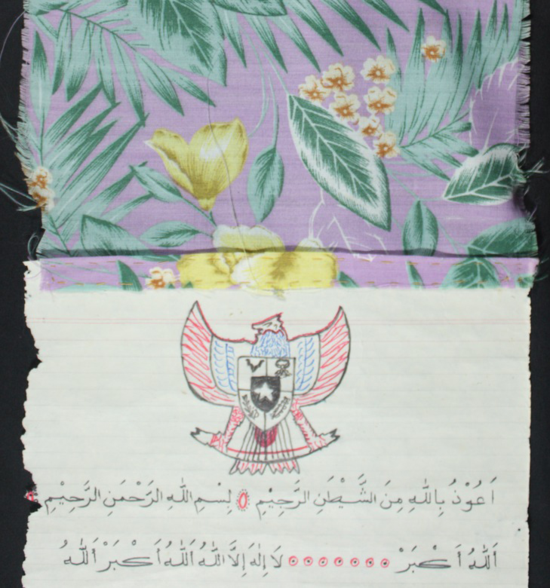 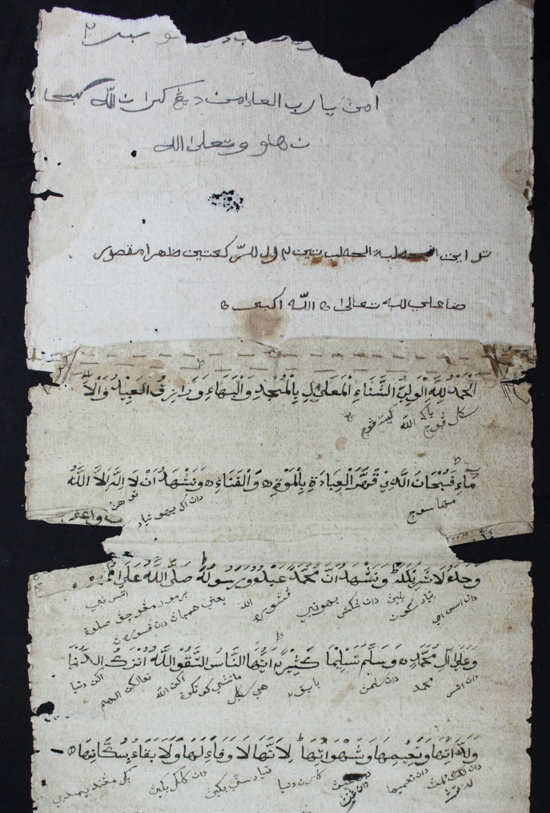 Sermon in Arabic with interlinear translation in Malay, 19th c., from the collection of Husain Hatuwe. EAP276/7/61. 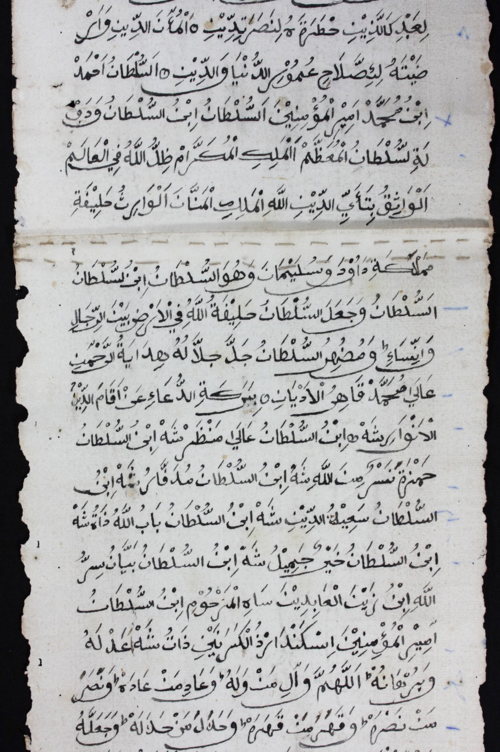 Sermon for Id al-Fitr on 1 Muharam, citing a similar chain of Ternate sultans, from the collection of Husain Hatuwe, Ambon. EAP276/7/38.