The Ramayana in Southeast Asia: (1) Cambodia

The recent digitisation of the Mewar Ramayana has enabled the ‘virtual’ reunification of this 17th-century masterpiece, bringing together paintings from the manuscript held across continents in different locations.  Originally composed in India in Sanskrit over two and half thousand years ago by Valmiki, the Ramayana is also one of the most popular masterworks throughout Southeast Asia.  This is reflected not only in the literary traditions, but also in the performing and fine arts, as well as in architecture and modern design.  The epic tells the story of Rama, his brother Lakshmana and Rama’s wife Sita, who was kidnapped by the demon king Ravana. The main part of the epic is about the fight between Ravana and Rama, who wants to get his wife back. In this battle, Rama is supported by his brother and a monkey chief, Hanuman, with his armies.

Knowledge of the Ramayana in Southeast Asia can be traced back to the 5th century in stone inscriptions from Funan, the first Hindu kingdom in mainland Southeast Asia. An outstanding series of reliefs of the Battle of Lanka from the 12th century still exists at Angkor Wat in Cambodia, and Ramayana sculptures from the same period can be found at Pagan in Myanmar. Thailand’s old capital Ayutthya founded in 1347 is said to have been modelled on Ayodhya, Rama’s birthplace and setting of the Ramayana.  New versions of the epic were written in poetry and prose and as dramas in Burmese, Thai, Khmer, Lao, Malay, Javanese and Balinese, and the story continues to be told in dance-dramas, music, puppet and shadow theatre throughout Southeast Asia. Most of these versions change parts of the story significantly to reflect the different natural environments, customs and cultures.

When mainland Southeast Asian societies embraced Theravada Buddhism, Rama began to be regarded as a Bodhisatta, or Buddha-to-be, in a former life. In this context, the early episodes of the story were emphasized, symbolising Rama’s Buddhist virtues of filial obedience and willing renunciation. Throughout the region, Hanuman enjoys a greatly expanded role; he becomes the king of the monkeys and the most popular character in the story, and is a reflection of all the freer aspects of life.  In a series of posts we will be exploring how the Ramayana epic has been rewritten and reimagined in the different parts of Southeast Asia, starting with the Khmer version, the Reamker. 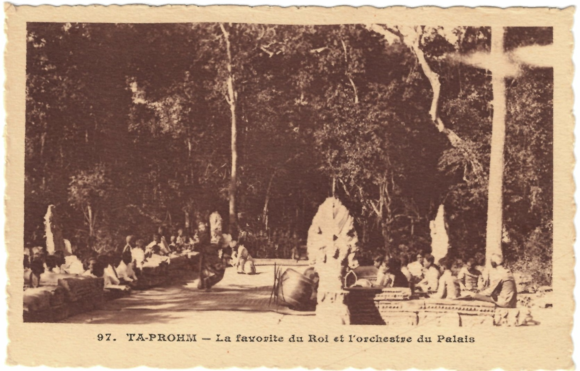 Royal Reamker performance, accompanied by the royal orchestra, at the ancient site of Ta Prohm, one of the temples of Angkor.  Postcard from around 1915 published in Paris by the Anciens Etablissement Gillot, from a collector’s album of postcards from Laos, Cambodia, Burma and Siam.  British Library, ORB. 30/6309, p. [16]

The Ramayana very early reached the ancient Hindu kingdoms (Funan, Chenla, Champa) in the territory of present-day Cambodia, southern Vietnam and eastern Thailand through contact with the south Indian kingdoms, but the oldest extant literary version, the Reamker in the Khmer language, appears to date from the 16th century.  It preserves closer links to Valmiki’s original than do the other Southeast Asian versions. The Rama story became a favourite theme for frescoes on temple walls and was the exclusive subject of the traditional Cambodian shadow play. The popular masked dance drama, lkhon khol, was based on certain episodes from the Ramayana, and with Rama being regarded a former incarnation for the Buddha himself the story forms part of the repertoire of the Royal Ballet  to the present day. 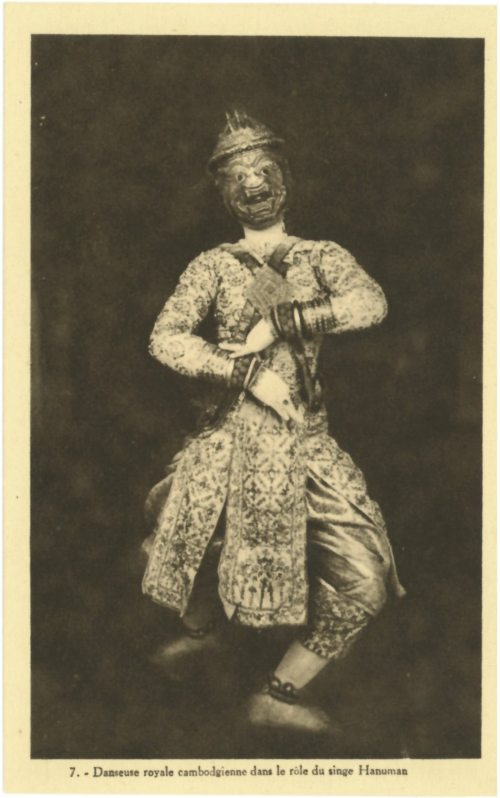 Dancer of the Royal Ballet in the costume of Hanuman.  Postcard from around 1915 issued by the Comité Cambodgien de la Société des Amis d’Angkor, from a collector’s album of postcards from Laos, Cambodia, Burma and Siam.  British Library, ORB. 30/6309, p. [30]

The literary text Reamker has the form of a dramatic recitative that was intended to accompany a mimed dance performance. Live recitations of parts of the Reamker by one of the most famous Cambodian storytellers of the 20th century, Ta Krut, had been recorded in the 1960s and are available online from the Bophana Audiovisual Resource Center.

J. J. Boeles, The Ramayana relief from the Khmer sanctuary at Pimai in Northeast Thailand.

Posted by Annabel Gallop at 1:40 AM