With Dan Snow’s series on the East India Company beginning on BBC2 on Wednesday 30 April, there may be renewed interest in ‘White Mughals’ like Major General Charles ʻHindooʼ Stuart. A less colourful figure but more important, from the British Library’s point of view, was Richard Johnson whose collection was purchased at a much reduced price by the East India Company in February 1807 for its newly formed Library. The Company paid 500 guineas for 64 albums of paintings (over 1,000 individual items) and 2,500 guineas for an estimated 1000 manuscripts in Persian, Arabic, Turkish, Urdu, Sanskrit, Bengali, Panjabi, Hindi and Assamese. These formed the backbone of the East India Company (later the India Office) Library. It is doubtful, however, whether at the time the Library appreciated the true value of the collection and as recently as 1921 the orientalist Thomas Arnold (Assistant Librarian at the India Office 1904-9) wrote somewhat disparagingly (see Rupam below):

As a collector he [Johnson] certainly did not show any remarkable power of discrimination…which would appear to indicate that he was not a man of very refined taste or endowed with a nice sense of judgement.

Today, however, the Johnson collection is accepted as one of the most significant in the British Library and in our recent exhibition, ‘Mughal India: Art, Culture and Empire’, it contributed a major proportion of the exhibits. 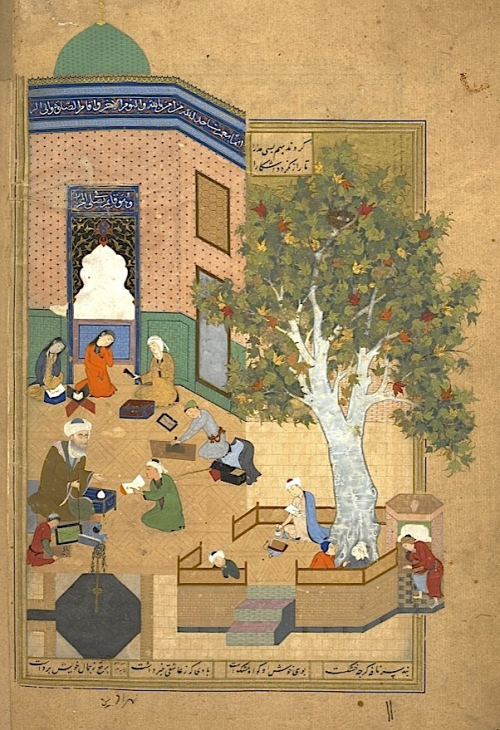 Laylā and Majnūn at school from the story of Laylā u Majnūn in Nizāmī’s Khamsah. Painting ascribed to Mīrak and Bihzād, and to Qāsim ʻAlī in the text panel, c.1494. This manuscript, classed as one of the most precious manuscripts in the imperial Mughal library (see my earlier blog ‘A Jewel in the Crown’), was acquired by Richard Johnson in December 1782. He must, however, have sold it separately from the rest of his collection since the British Museum purchased it from a dealer over 100 years later in 1908 (BL Or.6810, f.106v).

Richard Johnson (1753-1807)
Appointed a writer on the Bengal establishment of the East India Company's service Johnson arrived at Calcutta in 1770. Between 1780 and 1782 he was Assistant to the Resident, Nathaniel Middleton, in Lucknow, and from 1784 to 1785 he was Resident in Hyderabad. Recalled from both postings, his career was to some extent unsuccessful but he nevertheless established influential contacts with both European intellectuals such as William Jones, Elijah Impey and Antoine Polier and Indian poets and artists from whom he purchased and commissioned many works. It was Johnson who commissioned the first printed edition of the Dīvān of Ḥāfiż published by Upjohn’s Calcutta press in 1791 (see Encyclopaedia Iranica: Hafez VI). 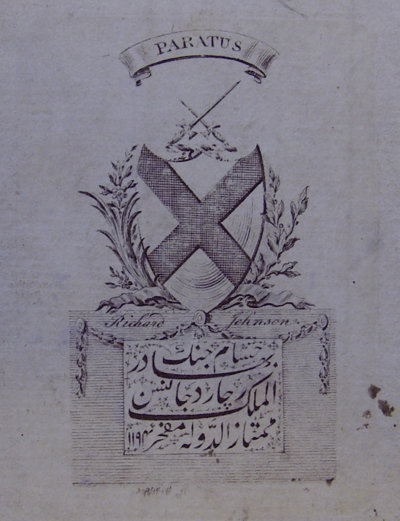 Richard Johnson’s bookplate inscribed in English and Persian with his name and Mughal titles: Mumtāz al-Dawlah Mufakhkhar al-Mulk Richārd Jānsan Bahādur Ḥusām Jang, 1194 ʻRichard Johnson chosen of the dynasty, exalted of the kingdom, sharp blade in war, 1780ʼ. Johnson was very proud of his titles which were granted by Shāh ʻĀlam in 1780 together with the rank (mansab) of 6,000 and insignia of a fish and two balls, a kettle-drum and fringed palankeen (BL IO Islamic 1518). 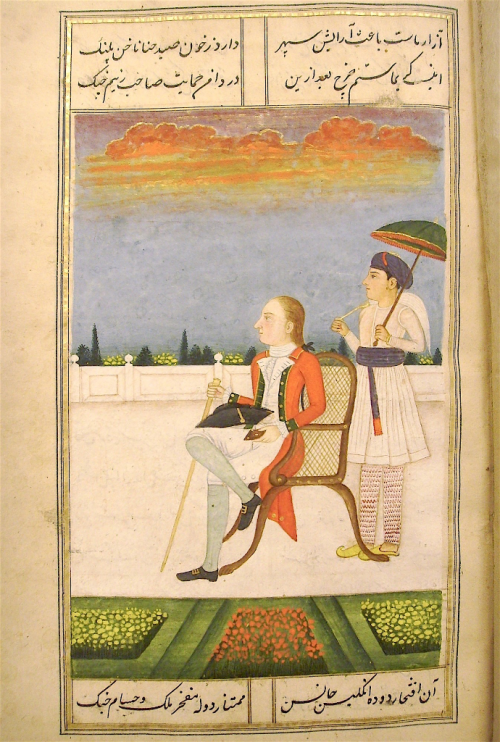 Portrait of Richard Johnson from a copy of Minnat’s Dīvān, painted by an unknown artist c. 1782. Thomas Arnold – he seems to have strongly disapproved of Johnson! – commented unfavourably on this portrait: “The artist has certainly made no attempt to flatter Mr. Richard Johnson, and his appearance does not inspire either admiration or respect.” All the same it is the only portrait we have of him, showing Johnson seated on a terrace in a formal garden, perhaps in Lucknow (BL Or.6633, f. 68r).

Mir Qamar al-Din Minnat
It was while Johnson was in Lucknow that he came across the poet Mīr Qamar al-Dīn Minnat. Minnat was a pupil of the Persian poet Shams al-Dīn Faqīr and was brought up in Delhi by his aunt who was married to the Islamic scholar and reformer Shāh Waliullāh. The deteriorating political situation in Delhi led him to move to Lucknow in 1191 (1777/78) where he met Richard Johnson who introduced him to the Governor-General Warren Hastings. Minnat wrote poetry in Persian and Urdu which included a Dīvān (selected poems) and a Persian version in verse, Qiṣṣah-i Hīr u Ranjhā, of a Panjabi tale, which he composed in 1781 at Johnson's request. He died in Calcutta in 1792 or 1793. 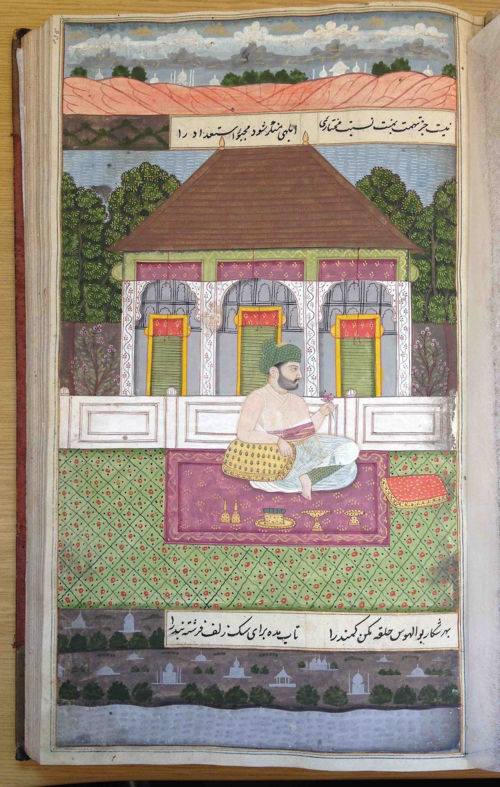 Portrait, presumed to be of the poet Qamar al-Dīn Minnat, by an unknown artist. In Falk and Archer (details below) he has been mistakenly identified as Nizam ʻAlī Khān (BL Or.6633, f. 136r). 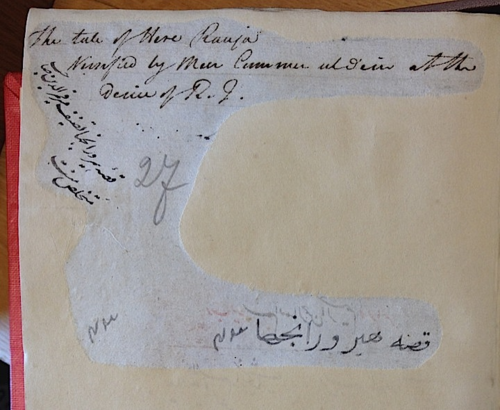 The fly leaf to Minnat's translation of Hīr u Ranjhā, inscribed by Johnson: “The tale of Hire Ranja versified by Meer Cummur uldeen at the desire of R.J.” (BL IO Islamic 1318, f. 27r).

The British Library has two copies of Minnat’s Dīvān, both dating from the author’s lifetime. One, IO Islamic 54, unillustrated but containing lavishly illuminated openings, belonged to Johnson himself. The opening pages of Johnson's personal copy of the Dīvān of Minnat (BL IO Islamic 54, ff.1v-2r)

The other, Or. 6633, containing a slightly different collection of texts, includes odes (qaṣīdas) in praise of Johnson (ff. 67v-68v – click here to see Text of Ode to Johnson), Warren Hastings (ff. 66r-67v) and Sir William Jones (ff. 68v-69v) in addition to 13 portraits, among them Warren Hastings, the Nawab of Awadh Āṣaf al-Dawlah (r. 1775-97), his ministers Ḥasan Riẓā Khān and Amīr al-Dawlah Ḥaydar Beg Khān Bahādur, and the Nizam of Hyderabad Nizam ʻAlī Khān (r. 1762-1803). For full details of the illustrations in this manuscript see Titley, p. 120. This manuscript was left unfinished with pages missing at the end and many gaps intended for subsequent paintings. At one time it belonged to the court of Awadh and it contains the characteristic red seals of Nāṣir al-Dīn Ḥaydar (r. 1827-37) and Amjad ʻAlī Shāh (r. 1842-47). It was purchased by the British Museum in 1905 from the estate of the Indian Civil Service Judge James O’Kinealy.

For those interested in further details of some of the more notable acquisitions in the Johnson collection, see the exhibition catalogue Richard Johnson (below) and pp. 14-29 of Indian Miniatures. The latter also includes transcripts (pp. 26-9) of the correspondence relating to the acquisition of the collection.