The Japanese section of Asian & African Studies has recently received two award-winning artworks of Sho (書 = calligraphy) by Saitō Shōen (斉藤昭苑), which make an exciting addition to the existing collection of approximately 100 pieces of modern Japanese calligraphy. Saitō Shōen is an active member of the Sōgen school of calligraphy（創玄会), and was awarded the 2010 Japan Fine Arts Exhibition prize (for Or.16906) and the 2012 Mainichi Exhibition Prize (for Or.16907).

Calligraphy in the Far East is more than words written in black ink with brushes on paper, representing a highly sophisticated art form created with relatively simple equipment. Artists carefully choose the size and materials of both paper and brushes as well as the tone of ink, selecting a font from a myriad of styles. The strength and velocity of the brush strokes also play a key role in conveying the ultimate expression of beauty.

The unique approach of the artists of the Sōgen School is based on creating artworks which are accessible to everyone. They believe that calligraphic art resonates more with our daily lives if it is easier to understand what it says. In addition to this concept, the themes of their works are often based on popular literature such as poems, haiku and excerpts from Japanese classics that bring art much closer to real life.

Saitō Shōen has said that her works usually start with her finding poems which inspire her, and then she keeps on experimenting to seek the best way to express her creativity. She tries many different sizes and types of paper, changing the brushes and her writing style, until finally the theme is perfectly reflected in the ink tone, brush stroke and the space on the paper. Her quest for the perfect harmony of beauty never ends. 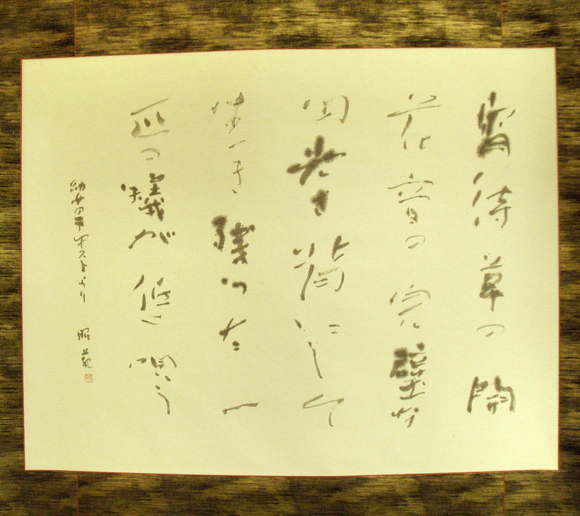 This first poem (Or.16906), by Satō Setsuko, has a lyrical and nostalgic flavour. When Saitō Shōen came across it, she visualised her work on a huge sheet of paper. She also decided on the choice of a combination of delicate brush strokes and pale ink as the best way to express the world of the poem. After a lengthy process of trial and error she finally reached the moment when she was satisfied with the transformation of the original poem into a calligraphic artwork. 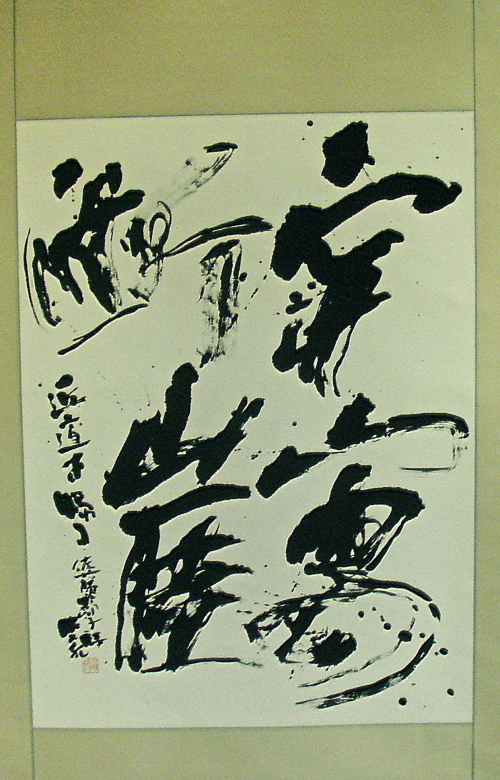 This second poem (Or. 16907), also by Satō Setsuko, has a dynamic science fiction atmosphere. Shōen was moved by the poem's energy. In line with the dramatic scale of the poem, she chose a strong brush with powerful and lively strokes using splashes of dark ink.

The Japanese section also has a work by Shōen’s daughter, Saitō Aya (さいとう あや).  Aya is not a calligrapher; however, she has inherited the creative gene from her mother. She has donated to us  her self-published picture book Nebukuro-kun  ネブクロくん ('The Sleeping-Bag Boy') (ORB.30/4556). 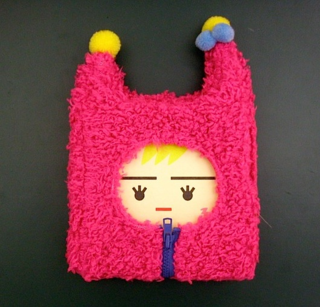 Her charming little book is bound in a very interesting way. It is the story of a boy in a sleeping-bag, which is his security blanket against the world. The book itself is protected by its own sleeping-bag as if to represent his unique personality. Aya's original idea was to visualise the essence of the story, using the motif of the sleeping-bag both inside and outside the book. It always attracts art students in the UK and inspires them by showing what can be done with the form of book as an artefact.

We are delighted to have these artworks by this creative mother-and-daughter duo in our collections.