The Ramayana in Southeast Asia: (3) Burma

The oral tradition of the Ramayana story in Burma is believed to date as far back as the reign of King Anawrahta (1044-77), the founder of the first Burmese empire at Pagan. Documented in Ava by the end of the 13th century, the Rama story – known as Rama Zatdaw in Burmese – continued to be transmitted orally from generation to generation up till the 16th century.  In the 18th century, the Ramayana had come to be regarded as a noble saga even among Buddhist monks. The story of Rama, based on the oral traditions of Old Pagan, may have been committed to writing between the 16th and the 18th centuries, in verse and prose as well as in dramatic form, but the first known written Burmese version of the Ramayana is Rama Thagyin (Songs from the Ramayana), compiled by U Aung Phyo in 1775. 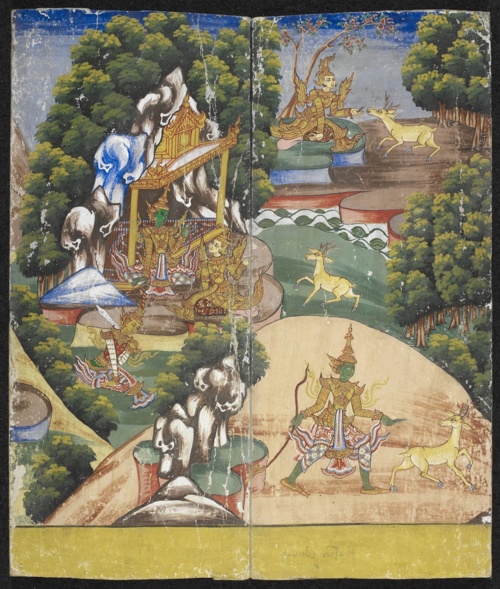 Ravana (called Dathagiri in the Burmese tradition), the ten-headed demon king of Lanka (Thiho), sends Gambi in the form of a shwethamin (golden deer) to Sita (Thida) (top right). Sita persuades Rama to go and catch the golden deer for her (left), and so he leaves Sita under the protection of his brother Lakshmana (Letkhana), and goes after the golden deer (bottom right). British Library Or.14178, f.8

The popularity of the Ramayana in Burma reached its zenith in the first half of the 19th century, when the story of Rama was depicted in a continuous series of 347 stone relief sculptures at the pagoda of Maha Loka Marazein of Thakhuttanai built in 1849 during the reign of King Bagan (1846-1853), of the Konbaung Dynasty. 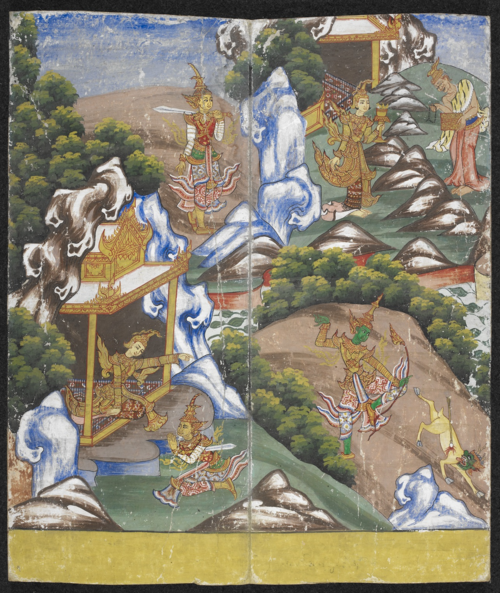 When Sita and Lakshmana hear Rama’s voice calling them in distress, Lakshmana makes a three-fold magic circle around their shelter to ward off evil, and warns Sita not to venture out of the circle (left). As soon as Lakshmana goes to look for Rama, Ravana changes himself into an old hermit and came to Sita and begs for alms of fruits. Sita forgets her brother-in-law’s warning and steps out of the magic circle to give Ravana food and water, believing him to be a real hermit (top right). British Library, Or.14178, f.9

Thakin Min Mi, the Chief Queen of Singu Min 1776-1781, was a poet and writer who encouraged the performance of the Ramayana. The Rama play was performed on the stage in full splendour in the royal palace beginning with the reign of King Bodawpaya (1782-1819). During the reign of Tharrawaddy Min (1837-1846) and his son Pagan Min (1847-1853) the Rama Zatdaw regained its popularity and became established as part of traditional court entertainment. In the 19th century stage performances and marionette performances of the drama of the Ramayana were presented in the palace by royal troupes of professional artists. During the reign of Mindon (1853-1878), the Rama Zatdaw was rarely performed in its entirety, with favourite episodes only usually being presented to please the court.

The king’s minister Myawady Mingyi U Sa converted the Ramayana Jataka into a typical Burmese classical drama, and he also composed theme music and songs for its performance. Ever since then, Ramayana performances have been very popular in Burmese culture, and Yama zat pwe (dramatic performances of the Rama story) marionette stage shows are often held. Scenes from the Ramayana can also be found as motifs or design elements in Burmese lacquerware and wood carvings.  By the late 19th century, the Ramayana story was being printed in Burmese: an early example in the British Library is Pontaw Rama (Part 1) by Saya Ku, published in 1880 (14302.e.3/5). 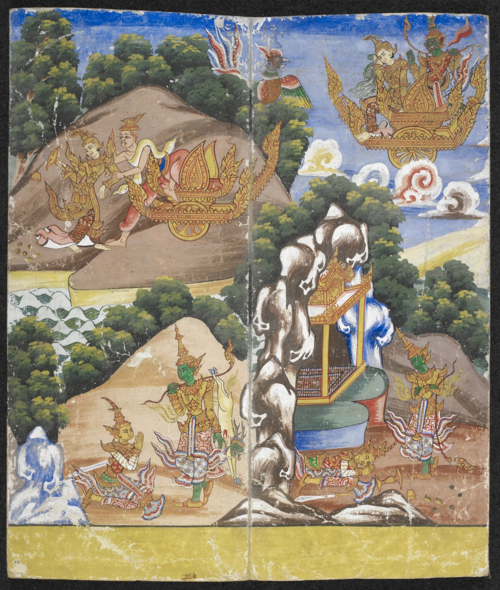 Ravana returns to his own form of a horrible giant with ten fearful heads and twenty great arms and begs Sita to come with him to his kingdom. When she refuses, Ravana summons his magic chariot and sweeps Sita up and away, into the sky and over the forests (top). When Rama and Lakshmana finally find their way home Sita is gone (bottom). British Library, Or.14178, f.10

The images shown here are from a Burmese folding book manuscript or parabaik (Or. 14178) dating from around 1870, which has 16 pages with painted scenes of the Ramayana story with brief captions in Burmese. The paper covers are painted in red, yellow and green with floral borders and prancing lions. One cover has an inscription in black ink in Burmese, giving the title, Rama Zat, and a brief identification of the contents.  The manuscript has been fully digitised and can be read here.