The Ramayana in Southeast Asia: (4) Indonesia and Malaysia

The final installment of our survey of the Ramayana epic in Southeast looks at its dissemination in the island world. That the Ramayana was already well known in Java by the end of the ninth century is evident from the magnificent series of reliefs carved into the walls of the temples of Prambanan in central Java around 900 AD.  However, the the first literary version in Old Javanese, the Ramayana Kakawin, appears to date from a century later. It is based not directly on Valmiki’s Ramayana but on a later Indian poetical version, the so-called Bhattikavya, a Sanskrit poem written by Bhatti (6/7th century), which both tells the story and illustrates the rules of Sanskrit grammar.  The first five cantos are a fairly exact translation, while the remainder is a much freer version. 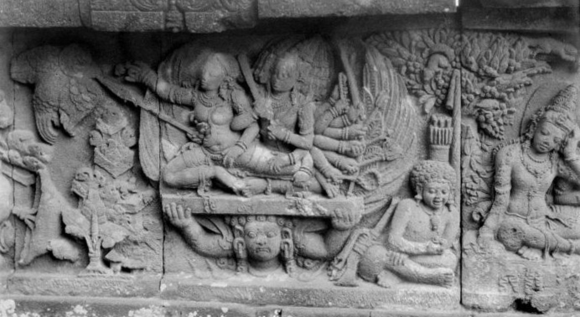 With the spread of Islam across Java from the fifteenth century onwards, the strongly Indianised Old Javanese culture and traditions retreated eastwards to the island of Bali, which today remains the only majority Hindu region outside India.  Nearly all Old Javanese literary compositions or kakawin survived only in Bali, although their stories continued to be known in Java through the shadow-puppet tradition. The late 18th-century renaissance of literature at the central Javanese courts of Surakarta and Yogyakarta saw the rewriting of the Ramayana Kakawin in modern Javanese.  In Bali, the story of Rama still plays a central part in the religious and cultural life of the island, and in the twentieth century became a popular subject for illustrated palm-leaf manuscripts. 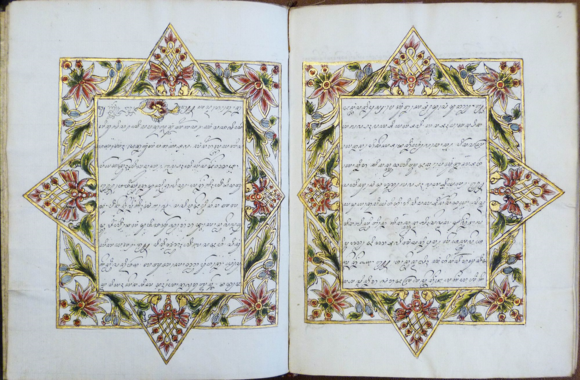 Two scenes from a Balinese palm leaf manuscript of the Ramayana, written and illustrated by Ida Bagus Adnyana of Geriya Gunung Sari, Pliatan, Bali, c. 1975. (Top) Sita sees the golden deer and urges Rama to catch it; (bottom) Ravana in the guise of an old hermit lures Sita out of the safety of her magic circle. British Library, Or.14022

The tradition of shadow-puppet theatre seems to have been in existence in Java for at least a thousand years, and the stories which are used in the wayang kulit shadow puppet theatre are taken from the Indian epics of the Ramayana and Mahabharata. While the characters and the plots remain basically Indian, the way the stories have been developed over the past 1000 years in the oral dramatic tradition reflects Javanese culture rather than Indian. The iconography of the shadow puppet theatre – with heads in profile, angular shoulders, slim torsos and pivoted limbs – has strongly influenced Javanese manuscript illustration. 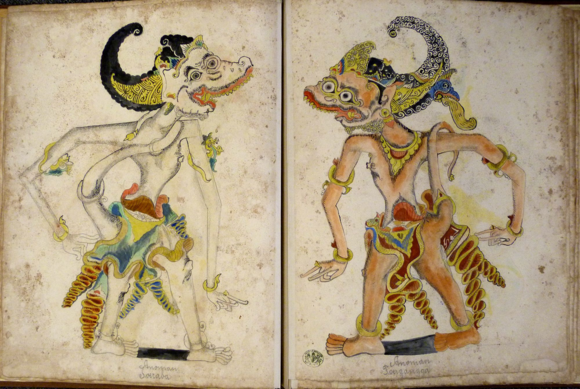 Hanuman (left) and Hanuman Tugangga, one of Hanuman’s sons by the Fish Princess (right). From an album of Javanese wayang characters, Java, 19th century. British Library, Or.9333, ff 8v-9r

In the Malay Muslim courts of the archipelago, literary traditions now transmitted using Arabic script continued to reflect deep-seated Hindu-Buddhist roots.  The Malay version of the Ramayana, Hikayat Seri Rama, is believed to have been committed to writing between the 13th and 15th centuries.  One of the oldest Malay manuscripts in this country – and probably the oldest known illuminated Malay manuscript – is a copy of the Hikayat Seri Rama now held in the Bodleian Library, Oxford, which was in the possession of Archbishop Laud in 1635.  The Malay version originated not from the classical Ramayana of Valmiki, but from popular oral versions widely spread over southern India.

As attested to in media ranging from the great 7th-century Ramayana stone pedestal in the Cham temple at Tra Kieu in Vietnam, to 20th-century performances of the Ceritera Seri Rama in the wayang Siam shadow puppet theatre of Kelantan and 21st-century Indonesian comics, the Ramayana has retained its position as a literary classic in Southeast Asia through the centuries.

On the Ramayana in Javanese and Old Javanese:
P.J. Zoetmulder, Kalangwan: a survey of Old Javanese literature.  The Hague: Martinus Nijhoff, 1974; pp. 217-233.
Theodore G. Th. Pigeaud, Literature of Java.  Catalogue raisonné of Javanese manuscripts in the Library of the University of Leiden and other public collections in the Netherlands.  The Hague: Martinus Nijhoff, 1968. 4 vols.