A rare map from Mindanao

Thomas Forrest (1729-1802) was a British sea captain who spent half a century plying the waters of the Malay archipelago, mostly in the service of the East India Company.  In 1775 Forrest undertook a voyage from his base at Bengkulu in west Sumatra to survey the north coast of New Guinea, sailing via the East India Company settlement on the island of Balambangan off the north coast of Borneo, which had been granted by the Sultan of Sulu following negotations with Alexander Dalrymple in the early 1760s.

On the return journey Forrest spent eight months, from 5 May 1775 to 8 January 1776, in the sultanate of Maguindanao on the west coast of the island of Mindanao in the present-day southern Philippines, where he was courteously hosted by the Rajah Moodo (Raja Muda or Viceroy) and his father Fakymolano (Fakih Maulana).  By his own account Forrest spent nearly every evening with the Raja Muda and Fakih Maulana, discoursing in Malay on a wide range of subjects, and his resulting book, A voyage to New Guinea and the Moluccas 1774-1776 (first published in London in 1779), includes a valuable description of the social, cultural, political and economic life of Maguindanao in the late 18th century. 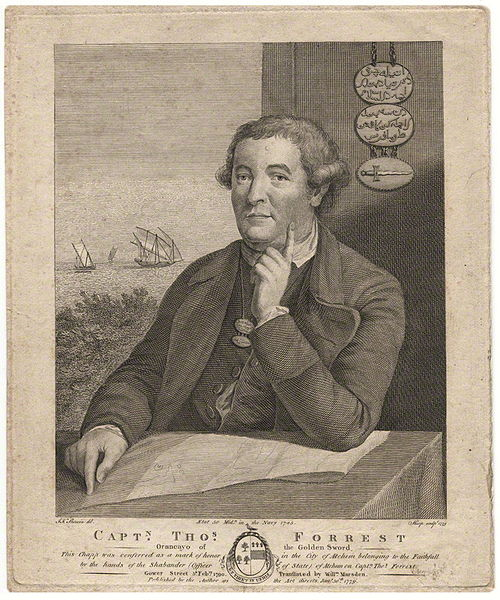 Thomas Forrest, fronstispiece in Voyage from Calcutta to the Mergui archipelago (London, 1792).

While in Maguindanao, Forrest received news that the Company base at Balambangan had been sacked by the Sulus, and he therefore made good use of his time in Maguindanao to survey the coast and the land, looking out for another suitable site for a trading post.  The second, improved, edition of his book, issued in London in 1780, includes numerous maps and charts of Mindanao and other places surveyed on his voyage.

Plate 18 in Forrest’s book is a map entitled ‘Part of Magindano, from Tetyan Harbour to the Island Serangani', which includes not only coastal features surveyed by Forrest himself, but also a detailed trajectory of the great Pulangi river up to its source, with a note of settlements along its banks, extending far beyond the limit of Forrest’s own explorations.  Forrest's source of information is elucidated in the opening of Chaper II of Book II of his work, ‘Geographical Sketch of Places on the Banks of the Rivers Pelangy and Tamontakka, by Tuan Fakymolano’, in which Forrest notes that  ‘the chart of these countries and rivers, drawn by Fakymolano, is deposited in the British Museum’ (Forrest 1780: 186).  This map of the main rivers and riverine settlements of Maguindanao is now held in the British Library as Add. 4924, and is an exceptionally rare example of a map produced within the Malay world. The rivers, with tributaries and channels, were drawn in black ink and captioned in Arabic script with the names of settlements by Fakih Maulana himself, with transliterations and some comments in English in a lighter brown ink by Forrest.  The map, which must have been produced in 1775, has just been fully digitised and can be studied in high resolution here. 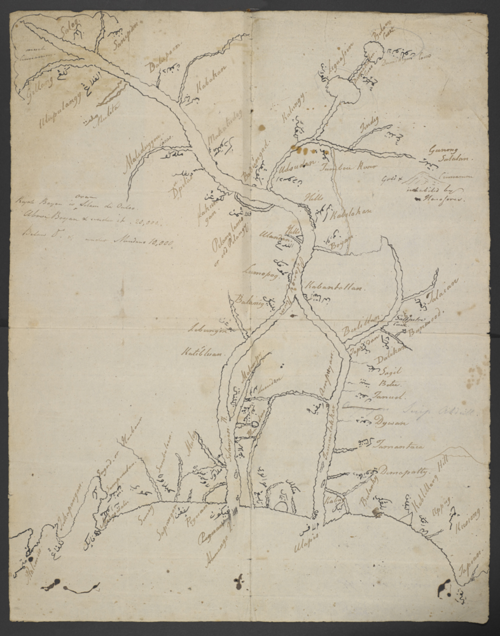 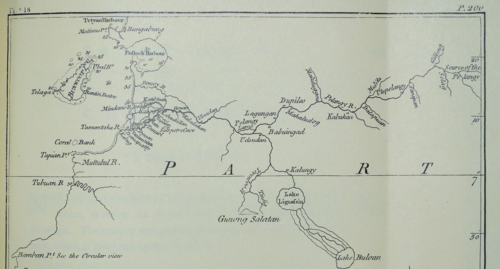 Detail from Thomas Forrest's map of 'Part of Magindano' ( Forrest 1780: Plate 18), showing the river Pulangi, based on Fakih Maulana's map. 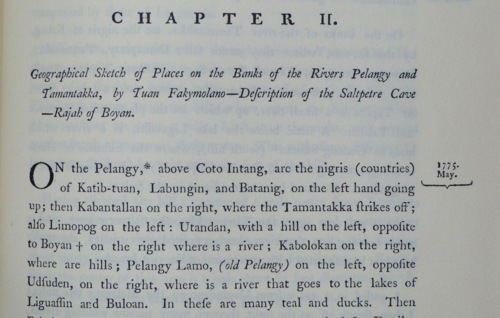 When Forrest left Maguindanao in January 1776 to sail on to Sulu and Balambangan, he carried with him two royal letters in Malay from the Raja Muda and Fakih Maulana, to the king (then George III) and the East India Company.  These letters will be discussed in my next post.