Alexander Dalrymple’s Treaties with Sulu in Malay and Tausug

When the East India Company began to look for a base in the Philippine islands in order to gain access to the China trade, attention focussed on the Sulu archipelago, lying east of the northern tip of Borneo. In January 1761, the Scottish hydrographer Alexander Dalrymple (1737-1808) arrived on the island of Jolo, the seat of the Sultan of Sulu, charged with the task of negotiating for a trading post for the Company. The then ruler of Sulu was Sultan Muhammad Muizzuddin, also known as Bantilan. He was the younger brother of Sultan Azimuddin I, who at the time of Dalrymple’s visit had been in exile in Manila since 1748 because of local opposition towards his policy of friendship towards Spanish Jesuit missionaries. Following the death of Muizzuddin in 1763 and the brief accession of his son, Sultan Muhammad Azimuddin II, Dalrymple was instrumental in helping Sultan Azimuddin I (usually referred to in European-language sources as ‘Alimuddin’) to return from Manila to Sulu and re-accede to the throne in 1764, where he ruled until his death in 1778. 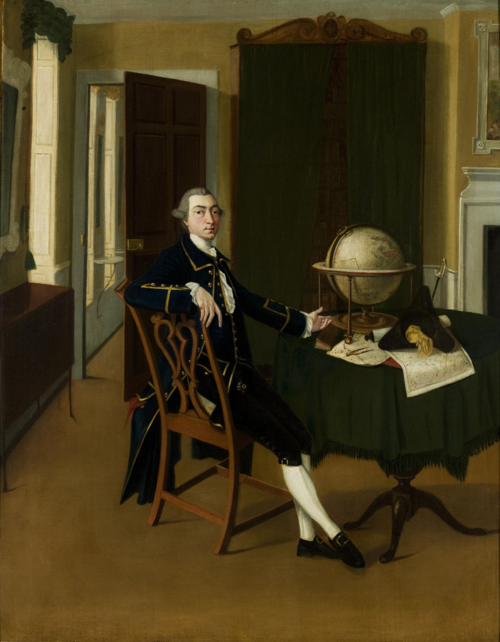 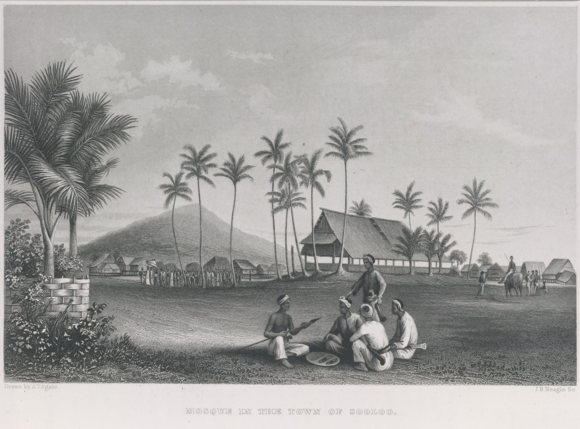 Between 1761 and 1764 Dalrymple negotiated and signed four major treaties with successive sultans of Sulu, leading to the establishment of an East India Company trading post on the island of Balambangan in 1773. Most of the original bilingual treaty papers have survived in the India Office Records in the British Library: the first treaty of 1761 was in Malay and English; the second treaty of 1763 was also originally in Malay and English, but only the Spanish translation of the Malay has survived; and the third and fourth treaties of 1764 were in Tausug (the main language of Sulu) and English. The English texts of the Treaties are well known, but the Malay and Tausug texts, written in Arabic script, have never been studied, and a close examination inevitably reveals a number of differences with the English text. A typical example is the English text of the first Treaty of 1761, which in clause 1 states that the British shall be granted ‘perpetual’ possession of the ground for their settlement, a word which is absent in the Malay version. But perhaps the most poignant aspect of this Treaty is the addendum found on the reverse of the Malay page: a strong rejection of the sale of opium, and a tight control on arms.  This clause – which is unnumbered and does not appear in any published English version of the treaty – appears to have been included at the request of the Sulus, judging from the detailed exposition in four lines of Malay, ‘The aforementioned trade goods prohibited by His Highness Sultan Muhammad Muizzuddin are opium, while no kinds of arms, big or small, may be sold to to anyone, even to the children and grandchildren of His Highness the Sultan, without the express permission of His Highness the Sultan; only His Highness the Sultan may buy these goods,’ compared with the laconic one-line English translation ‘Opium is contraband & arms & ammunition to any but the Sultan’.  Yet Dalrymple himself apparently strongly supported this prohibition; the culprit responsible for later developing the Sulu trade in opium and arms was the unscrupulous John Herbert, chief of the East India Company post at Balambangan, who was also responsible for a massive fraud against the Company itself which led to the financial collapse of the Balambangan settlement. 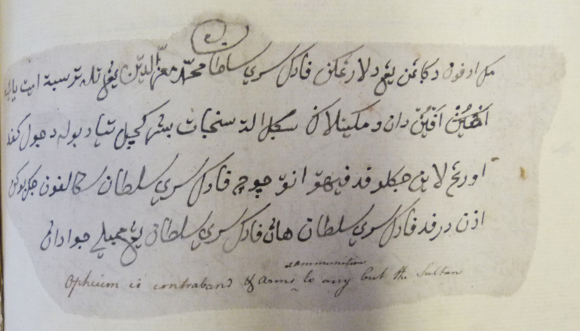 The first Treaty is also notable for high standard of the formal Malay language used, and its proficient calligraphy. An unusual aspect of the diplomatics of the treaties is that when the various royal Sulu seals were stamped across two pages, the two sheets of paper were first folded along an inner vertical margin, with the seal applied across the folds, resulting in an impression of two halves when the paper was flattened out.  The East India Company seals on the same documents, however, are simply stamped on the flattened sheet of paper. This peculiar method of sealing is not found in any other Muslim kingdom in Southeast Asia. Interestingly, the only other Islamic seal impression known displaying the same characteristic of having been stamped across the folds of a document, yielding a two-part impression, is the iconic seal impression of the Mughal emperor Babur, found on what is possibly the oldest surviving original Mughal document, a land grant dated 1527. 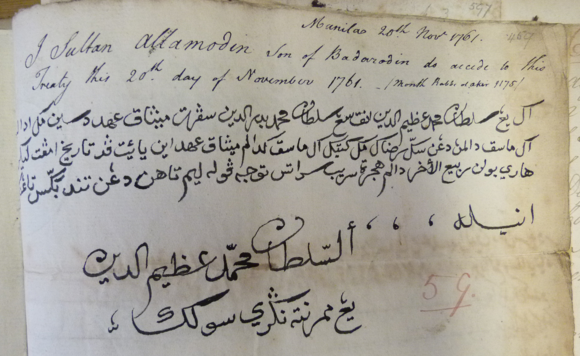 Further ratification of the first Sulu Treaty of January 1761, signed in Manila on 20 November 1761 by Sultan Muhammad Azimuddin I. This document was probably obtained by Dalrymple, who appears to have been in Manila from 9 November-1 December 1761 (pers.comm., Andrew Cook).  British Library, IOR: H/629, p.459. 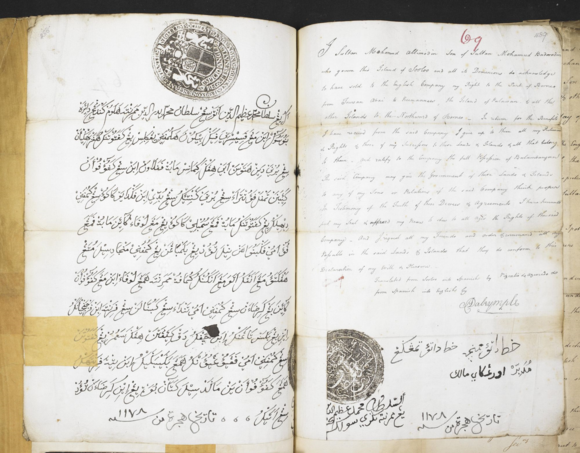