In my last post I wrote about the East India Company sea captain Thomas Forrest’s eight-month stay in the sultanate of Maguindanao, on the west coast of the island of Mindanao, from 5 May 1775 to 8 January 1776. During this visit, Forrest forged close relations with the Raja Muda (Viceroy) and his father Fakymolano (Fakih Maulana), the former sultan of Maguindanao. On arrival in Maguindanao, Forrest had to tread delicately due to the evident rift between the reigning Sultan Fakharuddin (r. 1755-c.1780), who was the younger brother of Fakih Maulana, and the Raja Muda. Acting on the sage advice of his Bugis guide Tuan Haji, while ensuring that he paid respects to the Sultan, Forrest allied himself with the court of the Raja Muda, and lodged in his fort.

On his departure in January 1776, Forrest carried with him two letters: 'I then took respectful leave of Raja Moodo.  He delivered to me the two letters already mentioned; one to his Majesty, the other to the Company, with the presents.  Nobody knew what they were, but himself and his father Fakymolano, who wrote the letters' (Forrest 1780: 290).  The two letters, written in Malay, are now held in the India Office Records in the British Library. Although unpublished, their presence was not unknown: the letter to King George was exhibited (probably in the form of a colour slide) in a talk on ‘The archives of the Honourable East India Company’ by William Foster at the Royal Society of Arts in London in 1923, described as ‘a letter in Malay, from the Sultan of Mindanao (the most southerly of the Philippine Islands), to George III, offering an alliance, offensive and defensive, and promising facilities for British trade in his country’. 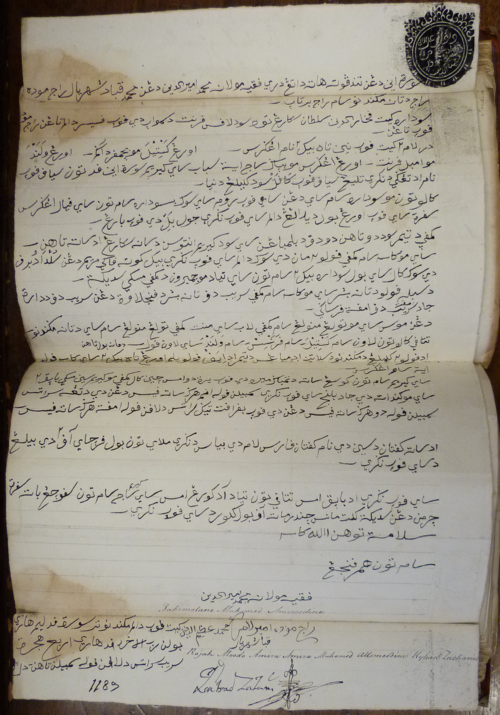 William Foster’s summary accurates reflects the content of both letters, which are indeed essentially the same. However, Fakih Maulana’s statesmanship is evident in the difference of nuance between the two letters. That to the king is more conventional in tone and pays compliments to the renown of the British name, pre-empting Napoleon’s famous characterisation of the English as ‘a nation of shopkeepers’ by stating, ‘the Spanish are constantly interfering in our [religion] – the Dutch are all for taking over our government – but the English just want to trade.’  The epistle to the Company, on the other hand, is rather more brisk and business-like. While the letter to the king states ‘I agree to help the Company against its enemies and in return I ask the Company to assist me in Maguindanao’, that to the Company states ‘I agree to help the Company against its enemies in the land of Maguindanao, but I do not agree to help beyond Maguindanao’.

Turning from the content to the form, the letter is not a typical royal Malay letter, not least in that it was written by Fakih Maulana himself rather than by a professional palace scribe. His erudition is alluded to in the title by which he was commonly known, the Arabic Faqīh Mawlāna, ‘Our Lord the Legal Expert’, but his handwriting is workaday rather than stylish. The opening words are fully in accordance with standard Malay protocol: Surat ini dengan tanda puti hati datang dari  …, ‘This letter comes in all sincerity from …’. Thereafter, however, the language used is colloquial rather than courtly, evoking the vocabulary of commerce and daily communication throughout the archipelago rather than of its courts, for example in the emphatic use of the possessive punya in the Raja Muda’s claim to be effective sovereign of the state: Saudarah kita Fakharuddin sultan sekarang tuah suda lapas perinta di semuanya dia punya pesisir dalam tangan Raja Muda punya tangan, ‘Our brother Fakhruddin, the sultan, is old and has relinquished his rule over all his coastal possessions into the hands of the Raja Muda’. In layout the letter is also untraditional: there is no religious letter heading or kepala surat as is commonly found at the top of most formal Malay letters. Many of the lines are presented in new paragraphs, and dashes are employed at the end of sentences, although traditional Malay in Jawi script did not employ punctuation or paragraphing. Occasionally words in Maguindanao, the local language of the state, are interspersed in the Malay text, such as labi, meaning 'especially' or 'in particular', which appears to be used here as a cognate for the Malay word lagi, 'moreover', to introduce a new clause in the letter.  At the end, both letters are dated 5 Rabiulakhir 1189, equivalent to 5 June 1775, indicating that the letters were written not long after Forrest's arrival in Maguindanano, but were only delivered to him on his departure. 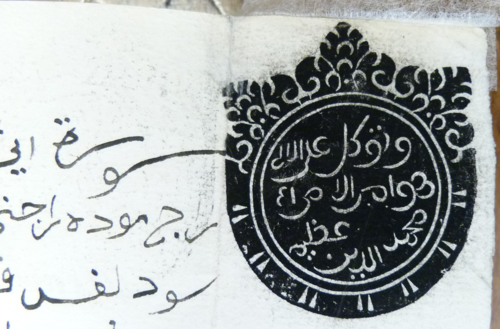 The full names of Fakih Maulana Muhammad Amiruddin and the Raja Muda Amir al-Umara Muhammad Azimuddin Kibad Shahrial, inscribed in Arabic and Latin script at the end of their letter to the Directors of the East India Company.  British Library, IOR: H/134, p.77.

In the event, despite the warm relationship that had developed between Forrest and the Raja Muda and Fakih Maulana, the East India Company made no further overtures to Maguindanao. The Raja Muda eventually acceeded fully to the throne of Maguindanao in around 1780, and ruled until 1805 (Majul 1999: 28).

Posted by Annabel Gallop at 1:41 AM