How did a fourteenth century illustrated ‘Treatise on the Art of Riding and using the Instruments of War’ [نهاية السؤل والامنية في تعلم أعمال الفروسية] end up in the British Library’s Arabic manuscript collection? A ‘Nincumpoop’ of the Napoleonic era, who moonlighted as an antiquarian, holds the answer.

This strikingly illustrated manuscript, Add.18866 (currently undergoing digitisation by the BL/Qatar Foundation Partnership), probably originates from Egypt or Syria. It was authored by Muḥammad ibn ‘Īsá ibn Ismā‘īl al-Aqṣarā’ī (d. 1348), and this copy was completed on 10 Muḥarram 773 AH (25 July AD 1371). The manuscript’s title claimed that, in its comprehensiveness, it could nullify all desire for further instruction in the subject. 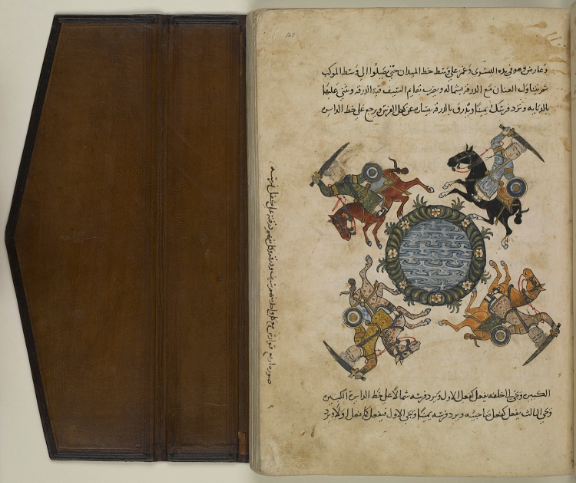 ‘Illustration of four horsemen, each one with a sword and a hide shield, and each one carrying his shield on his horse's croupʼ [صورة أربع فوارس مع كل واحد منهم سيف ودرقة وكل منهم درقته على كفل فرسه] (BL Add.18866, f. 140)

The British Library’s ‘Register of Additional Manuscripts’ states that this item was purchased from the estate of Sir Thomas Reade via a sale at Sotheby’s auction house. It is listed in the 1852 Sale Catalogue as Lot 94, a ‘Treatise on the Art of Riding and using the Instruments of War, with illustrations, beautifully written’.

The manuscript was the third most expensive item of the two-hundred and sixty lots from his estate, and by far the most expensive of Reade’s Arabic manuscripts. It was purchased on behalf of the British Museum for four pounds, four shillings (equating to four guineas, or £4.20 – about £500 today) by the brothers Thomas and William Boone, specialist antiquarian booksellers with whom the British Museum dealt in the nineteenth century. Prior to this, provenance can be surmised through tracing the life of its former owner.

Thomas Reade in the Army

Sir Thomas Reade (1782–1849) was born in Congleton, England and in 1799 he ran away from home to enlist in the army. Following campaigns in Holland, Egypt and America, as well as postings across the Continent, Reade received many subsequent honours and promotions, culminating in his Knighthood in 1815, aged just thirty-three. This event coincided with the end of his military career and marked a turning point in his life, for, on 29 January 1816, Reade set sail with Sir Hudson Lowe for the remote island of St Helena in the South Atlantic. 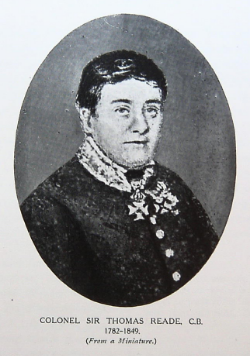 According to a biography written by his descendant Aleyn Reade, Sir Thomas was deployed as Deputy Adjutant-General of the troops. Not only was he jailer to the French Emperor Napoleon Bonaparte – exiled there after the Battle of Waterloo – but he acted as the main intermediary between Napoleon and Lowe, whose relationship was famously strained.

Whilst Count Montholon (who accompanied Napoleon to St Helena and was later suspected by some to have poisoned him) spoke favourably of Reade, as did Lieutenant Clifford (a Naval officer who visited the island in 1817), he was not popular with everyone. Gorrequer, Lowe’s Aide-de-camp and acting military secretary, referred to him in his diary by various derogatory pseudonyms including ‘Nincumpoop’ and ‘Ninny’. However, in spite of the rumours and controversy regarding Lowe’s alleged ill treatment of Napoleon, Aleyn Reade argues that the exiled Emperor appeared to have liked or at least favoured Sir Thomas.

Following Napoleon’s death in 1821, Reade returned to England.  He was appointed Consul-General of Tunis on 5 June 1824 (London Gazette of that date), and  married Agnes Clogg on 9 September that year. In Tunisia in addition to his main charge of defending against the French, his most notable achievement came in 1842 when he successfully influenced the Bey (monarch) of Tunis to abolish slavery throughout his dominions.

He remained in Tunis until his death from cancer in 1849 and was honoured with an impressive public funeral, which, as his obituary states, was ‘celebrated with solemnity and pomp’. It was Reade’s professional standing and foreign postings that enabled him to collect manuscripts, but the life he led outside of his official duties sheds more light on why he acquired them.

Like many high-ranking British officers of his day Reade was also a scholar and antiquarian. He studied and collected Carthaginian and Romano-African antiquities and zoological specimens, published papers and excavated among the ruins at Carthage at his own considerable expense. Many of the artefacts he unearthed were given to the British Museum, a practice that was common at the time, but would be a complicated diplomatic issue today. This was part of the less official, but equally destructive looting by colonial officials of the treasures of the greater empire. It is very probable that Reade acquired possession of al-Aqṣarā’ī’s manuscript at this stage of his career. 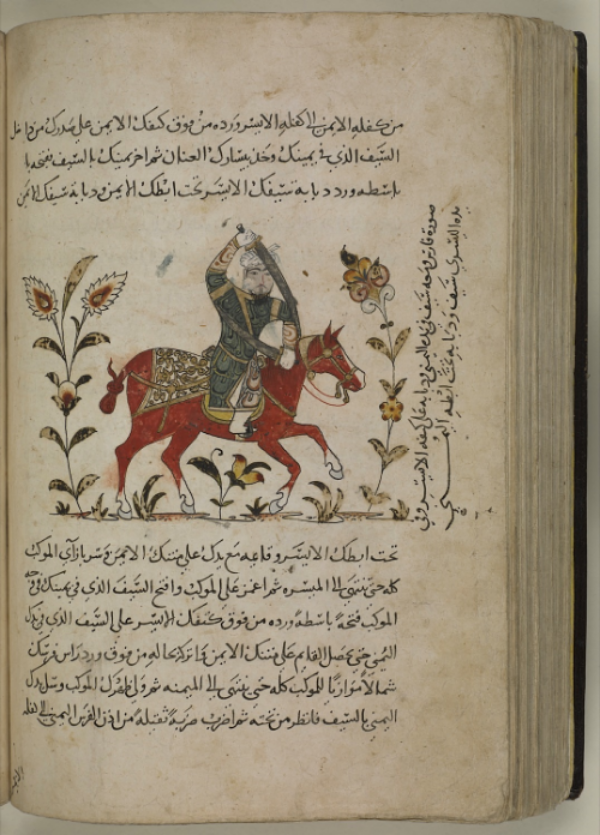 ‘Illustration of a horseman with a sword in his right hand, its blade on his left shoulder and a sword in his left hand whose blade is under his right armpitʼ [صورة فارس ومعه سيف في يده اليمنى وذبابة على كتفه الأيسر وفي يده اليسرى سيف وذبابة تحت إبطه اليمنى] (BL Add.18866, f. 132v
)

Unfortunately, this is where the trail runs cold. Exactly where, when and from whom Reade obtained this striking volume is unlikely to come to light. However, the personal interest of a high profile official in ancient antiquities allows us a small insight into the manuscript’s path to the British Library, where it now forms one of the highlights of the Asian and African Studies collection. A detailed catalogue description is available here.

‘Catalogue of a Valuable Collection of Oriental Books and Manuscripts; including many, the Property of the Late Sir Thomas Reade’, Sotheby and Wilkinson Sale Catalogue, 28 January 1852, pp. 1–16, and accompanying annotations. In BL S. C. Sotheby(1): Auctioneersʼ archival set of Sotheby’s sale catalogues, 20 Jan 1852 to 16 Feb 1852.

Herbert John Clifford, ‘A Visit to Longwood: copied by his great-grand-daughter, M. C. Bernard, from the diary of Lieut. Herbert John Clifford, R. N., 1817 [written on board H. M. sloop Lyra on the homeward voyage from China, whither the Lyra had gone with Lord Amherst’s embassy.]’, The Cornhill Magazine, (November 1899), pp. 665–75.

Aleyn Lyell Reade, The Reades of Blackwood Hill in the Parish of Horton Staffordshire. A record of their descendants: with a full account of Dr Johnson’s Ancestry (London: Spottiswoode & Co, 1906), pp. 57–63.

Manchester Museum has a collection of 75 pots from Tunisia collected by Sir Thomas Reade though it is not clear when the Museum acquired them. They mostly consist of Roman lamps .