There are several portraits of the rulers of the Qajar dynasty in the British Library collections, occurring either as manuscript illustrations or separate paintings,  but there are comparatively few examples of their predecessors the Zands who ruled Iran from 1751 until 1794.

One of these is a manuscript copy of a history of the Zand dynasty (Add.24904), the Tārīkh-i gītīgushāʼī (here called Tārīkh-i Zandīyah), by Mīrzā Muḥammad Ṣādiq, which was continued after the author’s death in 1204 (1789/90) by his pupil ʻAbd al-Karīm ibn ʻAlī Riżā al-Sharīf.  It was written originally at the request of a later Zand, Jaʻfar Khān (r. 1785-89), intended as a contemporary record of the events of his reign. This volume contains only the section up to the death in 1779 of Karīm Khān Zand, the founder of the dynasty. 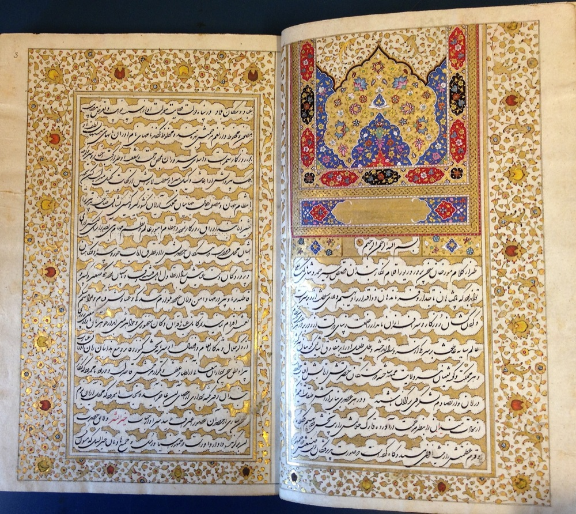 A companion volume is Add.24903, a history of the Zands from the end of Karīm Khān’s reign until the defeat and capture of the last ruler Luṭf ʻAlī Khān (r. 1789-94). The author is Ibn ʻAbd al-Karīm ʻAlī Riżā Shīrāzī. Despite the close resemblance of his name to Muḥammad Ṣādiq’s pupil, this work appears to be different from the continuation mentioned above. According to a note at the end, this copy was made for the soldier and diplomat Sir John Malcolm (1769-1833). It is dated Safar 1218 (1803).

Both works were in fact used extensively by Malcolm in his History of Persia and according to the catalogue of the Sotheby’s sale at which they were purchased by the British Museum (Catalogue, p. 17), they were presented to him by the Qajar ruler Fatḥ ʻAlī Shāh himself (r. 1797-1834) while he was Ambassador at his Court [1]. This would have been during Malcolm's 3rd mission to Iran in 1810. Malcolm was on very good terms with the Shah who described him as his ‘first favourite among Europeans’ and made him a Sipahdār ('general) of the Persian army, granting him the order of the Lion and the Sun (Lambton, p. 100). Both manuscripts include richly illuminated openings in addition to exceptional contemporary lacquer bindings decorated with named portraits of the Zand rulers and their courtiers, all sporting typical Zand turbans. We are told in the sale catalogue that ‘These specimens of Oriental binding are in the finest state of Bibliopegistic art, and of rarest occurrence, being only to be found on books given by the Shahs in presents’. 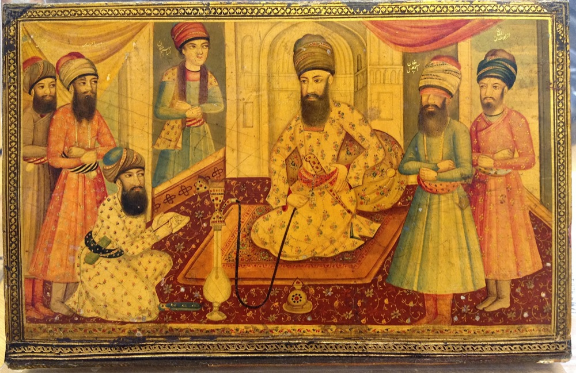 The front cover contains the following portraits (right to left):

Āzād Khān Afghān (d. 1781) one of the main rivals for control after the assassination of Nādir Shāh in 1747 who surrendered to Karīm Khān in 1762 and subsequently became one of his trusted nobles (Malcolm 2, p. 66);
Ismaʻīl Khān - presumably blind. There was an Ismaʻīl Khān, Karīm Khān's nephew, who later became governor of Hamadan (Malcolm 2, p. 104);
Karīm Khān (r. 1751-79), the founder of the Zand dynasty who never himself assumed the title of Shāh, choosing instead to be Vakīl (‘deputy’). With a reputation for clemency and forbearance, he apparently had comparatively modest tastes preferring to sit on a rug instead of a throne;
Ibrāhīm Khān, Karīm Khān’s 5th son ‘deprived of his virility’ by his cousin Akbar Khān (Malcolm 2, p. 89);
Mīrzā Jaʻfar Vazīr, minister of Karīm Khān;
Mīrzā Mahdī;
Mīrzā ʻAqīl 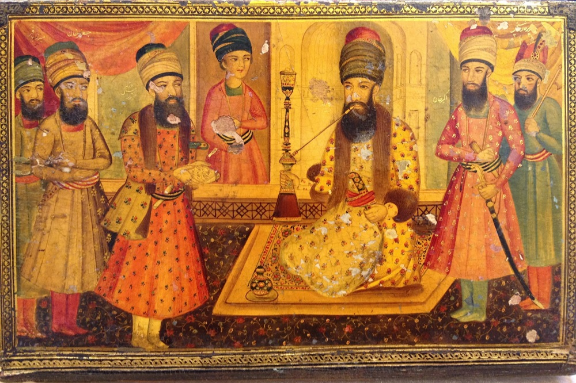 The back cover contains the following portraits (right to left): 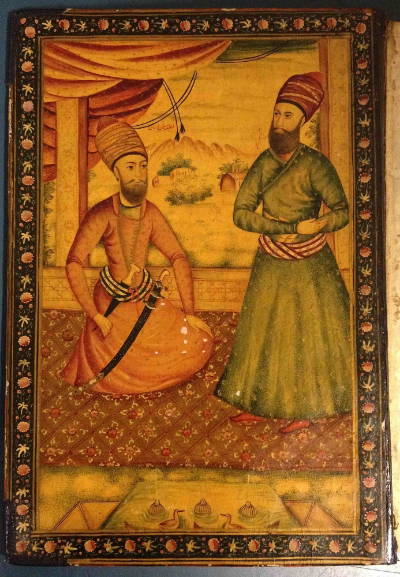 Luṭf ʻAlī Khān (left), son of Jaʻfar Khān, the last of the Zands, defeated in 1794, blinded and put to death on orders of his successor Aghā Muḥammad Khān Qājār (r. 1794-97) whose portrait with Hājī Ibrāhīm (Governor of Shiraz who turned against Luṭf ʻAlī Khān ultimately bringing about his downfall) is included on the front cover of this volume. Luṭf ʻAlī Khān is accompanied (right) by his minister Mīrzā Ḥusayn (Add.24903, inside back cover) 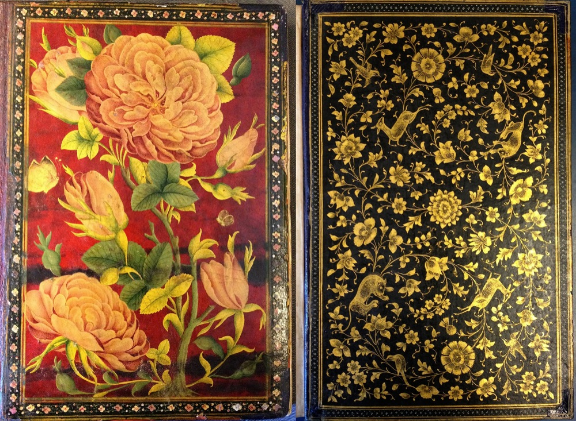 The lacquered book covers, dating from around 1803, no doubt reflect idealised rather than historical scenes, but the Library does also have a portrait of Karīm Khān which was painted by a contemporary artist. It is one of 23 paintings purchased 15 May 1894 from Sidney Churchill (1862-1921), Persian Secretary to Her Majesty's Legation at Teheran 1886-94, who altogether acquired more than 200 Persian manuscripts for the British Museum. The portrait of Karīm Khān is inscribed on the back, presumably by Churchill, ‘Contemporary portrait said to be of Kerim Khan Zand’. Churchill had a personal as well as professional connection with the Court since his sister-in-law was the daughter of Dr Joseph Tholozan (1858-97), personal physician to Shah Nāṣir al-Dīn Qājār (r. 1848 -1896). It is probable that this portrait was a personal gift. 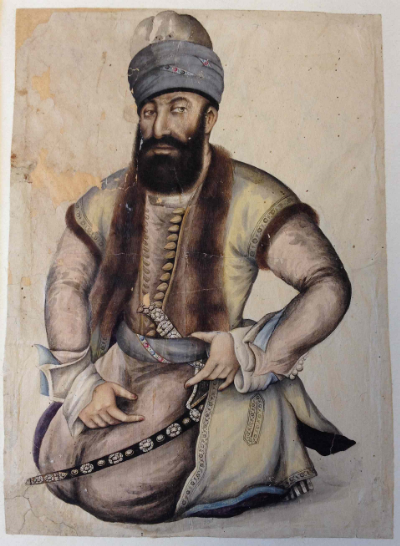 Contemporary portrait of Karīm Khān, founder of the Zand dynasty (Or.4938, f.1)

Posted by Ursula Sims-Williams at 2:16 PM