The beginnings of Thai book production: rare Thai books at the British Library

Historic documents and early printed books from Thailand came to Britain mainly as a result of trade and missionary contacts. The earliest period of Thai printing, from ca.1835-1890, is well represented in the Thai collection in the British Library due to a gift by Christian missionaries of about 100 texts. Some of these are unique copies, including the only known copy of the first Thai book ever printed in Thailand, a Christian text published in 1837 (ORB.30/894). In the early 20th century, all publications by the Thai National Library (formerly Vajiranana Library) were deposited at the British Museum Library.

Through careful development and the generosity of donors, the collection of rare books and other printed historical materials in the Thai language (including maps, journals and newspapers, photographs, stamps, etc.) in the British Library has become a major  resource for research and re-printing in the UK and worldwide. The Thai rare books collection is particularly strong in the areas of Thai language and literature, Buddhism, travel and exploration reports, history and culture. Important Thai authors such as Chulalongkorn (Rama V), Vajiravudh (Rama VI), Vajiranana Varorasa, Damrong Rajanubhab, Anuman Rajadhon, and Sunthon Phu are well represented. 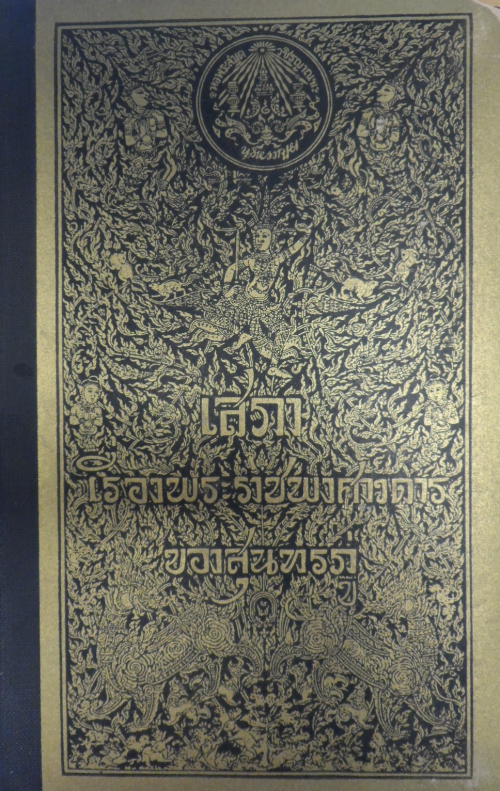 Front cover of Sunthon Phu’s Sepha ruang phraratcha phongsawadan, a poetical version of the chronicle of Ayudhya (Bangkok: Sophon, 1922). The  booklet of 125 x 190 mm is bound in a hardcover with a gilt and black image on the front, resembling gilt and lacquer manuscript covers showing devas and mythical lions. British Library, Siam.163.

Chulalongkorn (Rama V, reigned 1868 – 1910) has often been credited with the founding of the modern Thai state. His diplomatic policies averted colonial domination, and at the same time he opened the country to Western education. A government press turned out textbooks and a weekly newspaper, The Royal Gazette, and freedom of the press and religion were guaranteed by law to encourage the development of other newspapers. In 1905 the National Library (Vajiranana National Library) was founded by amalgamating three royal libraries: the Buddhasasanasangaha Library, the Mondiradhamma and the Vajiranana Library. The National Library became one of the main publishers of the time. 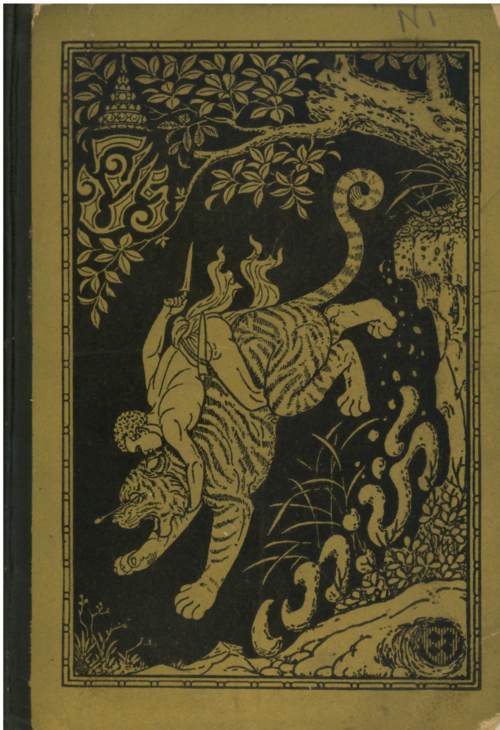 Chulalongkorn's son and successor, Vajiravudh (Rama VI, reigned 1910-25), received his education in Britain (Sandhurst and Oxford). The king wrote extensively on nationalist themes. He made great efforts to establish a general education system, which was officially brought into practice in 1921. Nationalist education and propaganda are very well reflected in publications of the 1920s.

Publishers and markets
The very first printed books in Thai, translations of Christian texts, were produced in 1835 in Singapore and New York (ORB.30/894-897). The first Thai printing press was established in 1836 in Bangkok by Catholic missionaries. Initially, interest in publishing was confined mostly to foreign missionary organisations which published numerous translations of Bible tracts, commentaries and catechisms into Thai. 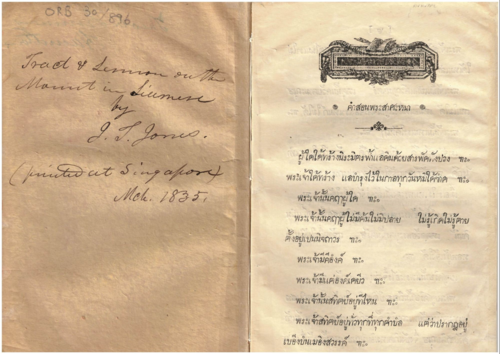 Khamson phrasasana, a small booklet containing a summary of the Gospel of Matthew. It was printed in Singapore in 1835. The distinctive handcrafted Thai typeface was the first to be used for printing texts in Thai language. British Library, ORB.30/896.

However, very soon the royal court also became interested in the printing press and first made use of it in 1839 to publish a royal proclamation banning opium smoking and trade. In 1858, King Mongkut (Rama IV) commanded the government to establish a printing press for its own use to print The Royal Gazette (Ratkitchanubek), as well as administrational papers and records (chotmaihet), handbooks, laws, travel reports, speeches, and descriptions of the provinces of Thailand and of foreign countries.

The Buddhist Sangha also produced books and teaching materials in large quantities for educational purposes. The mass production of translations of Buddhist scriptures and commentaries from Pali into Thai helped to improve the knowledge of the Pali canon among all levels of the society. 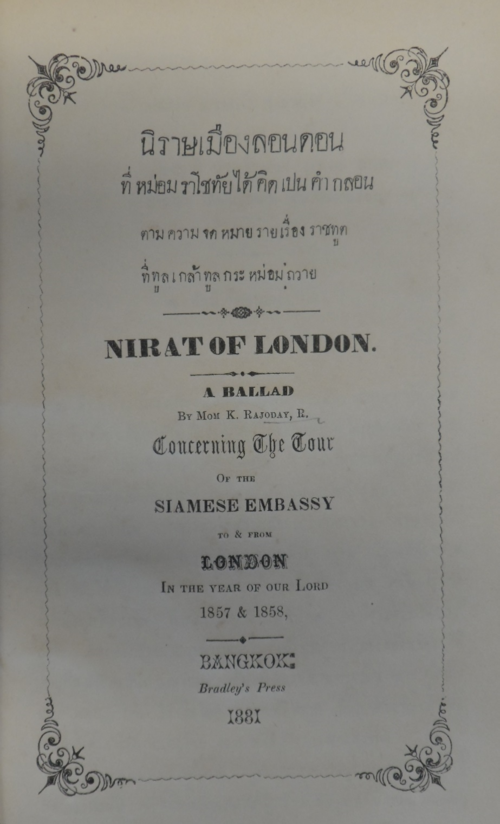 Title page of Nirat muang London, a 95-page ballad describing the beauty of London by Mom Rajoday, who was chief interpreter of the Siamese embassy to London in 1857-1858. Printed by Bradley’s Press in Bangkok, 1881. British Library, Siam.23.

Buddhist monasteries played an important role as publishers: their cremation volumes, which were often sponsored by private persons or families, appeared in large numbers and were dedicated to a variety of topics, from Buddhism to linguistics, literature, anthropology, culture, history and archaeology. By the end of the 19th century some commercial publishing houses had been established in Bangkok, and more followed during the first decades of the 20th century, such as Bradley’s Press, Smith’s Press, Union Press, Thai Printers,  Sophon Printers, Bamrung Nukunkit Printers, Sophanaphiphatthanakon, as well as the publishing arms of public bodies such as the Siam Society and the Vajiranana National Library.

Characteristics of early Thai books
For book printing, metal movable type was used right from the beginning. Paper imported from Europe was used as printing material as the locally produced Khoi paper (made from Mulberry bark) was too rough for printing. Whereas the first printers were rather small workshops, by the end of the 19th century mechanized printing had also been introduced. Illustrations, though rare, were produced by using the method of lithography. After 1900, photographic reproduction was applied more and more often. 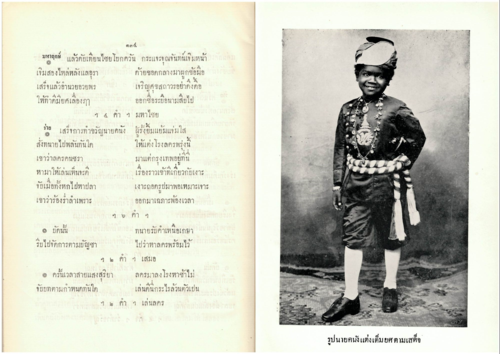 Illustration in the book Botlakhon ruang Ngo Pa, a theatre play about a love romance between two Senoi people, by King Chulalongkorn, 1923. For the illustrations photographs of one of the king’s favorite servants, a Senoi boy, were used. British Library, ORB.30/5361.

The shape of books took the rather simple form of paperback brochures. Books on religious topics or important literary works often had a stronger binding and hard covers. Leather or skin covers were rather unusual, but cloth covers made from silk or cotton were quite common. At the beginning of the 20th century, cover decorations and illustrations became more important. The title pages were often decorated with the emblem of the editing institution, for example Buddhist institutions or public bodies.

Posted by Annabel Gallop at 2:06 AM