The Couling-Chalfant collection of oracle bones in the British Library

The Chinese collection in the Department of Asian and African Studies of the British Library includes a unique series of more than 400 oracle bones (jia gu甲骨). They date from between 1600 and 1050 BCE (Shang Dynasty) and this makes them the oldest items in the entire British Library. Oracle bones are turtle plastrons or animal bones (mostly ox scapulae) used for divination practices during the Bronze age in China. Questions about crops, the weather or the royal family were engraved with a sharp object and the bone was then heated with metal sticks. Because of the heat, the bones would crack and the answers would be given by the diviners who interpreted the different shapes and the patterns of the fractures. The response was inscribed on the bone too. Most of the cracks produced by the heat on the reverse side of the bones appeared on the front side with a distinctive shape (├ ) from which comes the Chinese character for the verb “to divine” (卜). 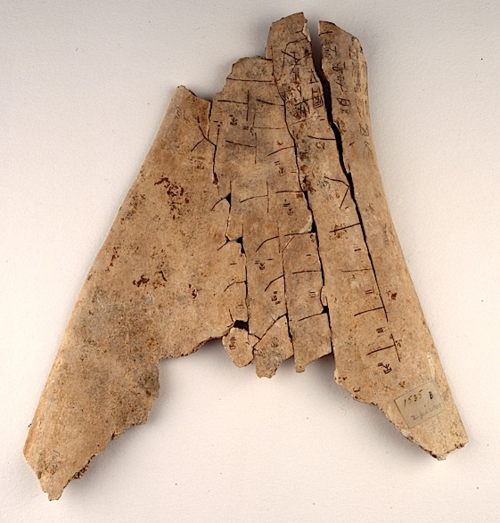 Oracle bones are a recent discovery in Chinese archaeology. The first sets were collected and decrypted only during the early years of the 20th century.

During the 19th century, oracle bones were known by locals as “dragon bones” (long gu 龍骨) and, following the principles of the traditional Chinese medicine, they were grounded to obtain a powder which was believed to be able to cure many types of diseases. In 1899, Wang Yirong, antiquarian, collector of bronzes and chancellor of the Chinese Imperial Academy, recognized the importance of the inscribed bones and purchased several pieces from an antiquities dealer who had previously acquired the bones from some farmers. After Wang committed suicide following his brief participation as a local commander in the Boxer Rebellion, his friend Liu E, who had acquired the bones from Wang, published in 1903 the first book of oracle bones rubbings and inscriptions and from that moment the news of their discovery spread rapidly. Oracle bones became items of great value for foreign collectors and dealers and they soon began to be collected by British private and public institutions.

Oracle bones represented an extraordinary discovery for sinologists and historians and they are significant in two ways. On the historical side, they prove the existence of the Shang Dynasty, which some researchers questioned until the beginning of the 19th century. They also contain complete accounts of the royal genealogy of the dynasty. On the linguistic side, they are the earliest writing in China and they represent an essential tool for understanding Chinese characters and etymology. In fact, Shang Dynasty script, also called “oracle script” (jia gu wen 甲骨文), is the oldest known Chinese script and is the direct progenitor of the Chinese characters used nowadays. The jia gu wen script is schematic and the shape of the characters is simplified to the maximum level to make it simple to engrave on hard surfaces. Round forms are often adapted to more rectilinear ones.

BL Or.7694.1601. Shang Dynasty oracle bone. Inscriptions in jia gu wen are visible on the surface.

The oracle bones in the British Library come from the Couling-Chalfant collection which was made in China between 1903 and 1908 by two missionaries, Samuel Couling and Frank Chalfant, the former British and the latter American, who were working in the Shandong Province. The Chinese oracle bones officially entered the British Library collection, which was part of the British Museum at that time, in 1911. Other oracle bones coming from the Couling-Chalfant collection can be also found in the National Museum of Scotland. Another notable collector of oracle bones was Lionel Charles Hopkins, a British sinologist and diplomat who worked in Tianjin as Chief Ambassador. He purchased several oracle bones with the help of Chalfant and later donated his collection to Cambridge University Library, where more than 600 pieces are now deposited.