On 11 January 1937, the British Political Agent in Kuwait, Gerald Simpson De Gaury (1897-1984) returned to Kuwait City from a tour of the interior. Upon his arrival at the Agency, De Gaury was informed by his Head Clerk that a British subject had been arrested and detained by the local authorities. The subject in question, a Pathan [Pashtun] restaurant owner named Abdul Muttalib bin Mahin, had been charged with “selling cat in his restaurant instead of mutton”.

As Muttalib was a British subject, his arrest was contrary to the provisions of the Kuwait Order-in-Council, the agreement between the British Government and Kuwait’s rulers that governed the relationship between the two states. De Gaury’s response to this breach of the agreement was decisive and illustrates well the extent of the British Empire’s control over Kuwait during this period.

According to a letter De Gaury sent to his superior, Trenchard Craven Fowle (1884-1940), the British Political Resident in the Persian Gulf, within half an hour of his return to the city, he had successfully secured Muttalib’s release from prison and temporarily detained him in the Agency instead. 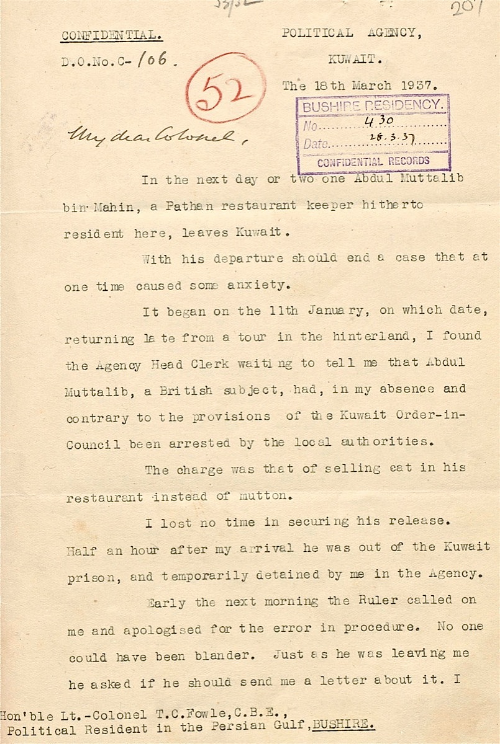 ‘A Herd of Eight Fat Cats’

The next day, the ruler of Kuwait, Shaikh Ahmad Al Jabir Al Sabah apologised to De Gaury in person for the “error in procedure” and then sent a letter to the Agency that presented the ‘evidence’ against Muttalib. According to the letter, the Kuwait Town Watch had visited Muttalib’s house and “found a herd of eight fat cats there”. The letter ended with a request for De Gaury to approve Muttalib’s deportation from Kuwait. In the words of De Gaury, “His Excellency or his officers had thus in effect tried, and convicted the man and I was to be merely his executive official for the deportation”.

Subsequently, De Gaury called for Shaikh Ahmad’s Lieutenant (who was head of the Town Watch) to come to the Agency. Once the Lieutenant arrived, De Gaury informed him that he intended to try Muttalib the following day at 3pm and asked for the witnesses to be ready at that time. In his letter to Fowle, De Gaury states that as he had previously seen an unusual number of cats in the Lieutenant’s own home, he “sharply” asked him how many he himself kept, to which the Lieutenant fearfully responded that his household had “about fourteen, including those in the harem” (the area of a house reserved solely for women).

The next day, De Gaury was told that Shaikh Ahmad had gone away on a hunting trip and that it was not possible to call the witnesses to trial without the Shaikh’s permission. Undeterred, De Gaury held the trial regardless and swiftly dismissed the case against Muttalib due to a lack of evidence. In his letter to Fowle, De Gaury mentions that the American Mission[1] had become involved in the case “with their habitual elan” when Dr. Charles Stanley Mylrea from the Mission’s hospital had analysed a hair found by the Mayor on a table in Muttalib’s restaurant and certified it to be the same as that on a dead cat from a dustbin in the neighbourhood. However, much to the chagrin of the Mission, De Gaury decided that, in the absence of all other witnesses, Mylrea’s assessment carried no weight as evidence. 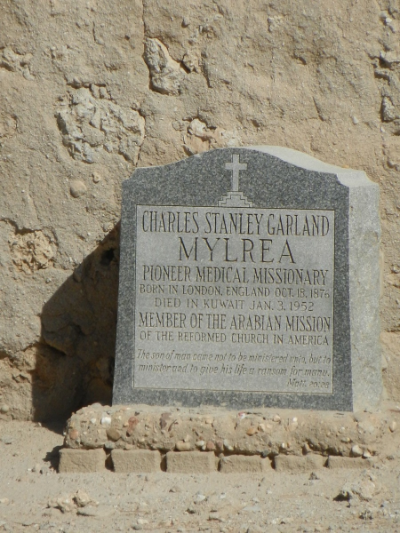 Playing on the Shaikh’s Weakness

According to De Gaury, by this point, the town had split into pro- and anti-Muttalib factions as a result of the controversy and in order to show his support, De Gaury visited Muttalib’s restaurant and publicly rebuked the Mayor of Kuwait who had initially brought the case against the restaurateur. De Gaury’s actions, combined with pressure from Kuwait’s religious establishment (who also supported Muttalib, “owing to his past charity”), soon led the local authorities to lose interest in the case.

De Gaury believed that the Mayor had initiated the case against Muttaliib in order to try and gain control of his restaurant and had been assisted in this effort by the Town Lieutenant, said by De Gaury to be an “ambitious, jealous man who plays on the Shaikh’s weakness”. At this time, a large number of Indian merchants had recently been expelled from Iran and Iraq and in the words of a British official “were keen to try their luck in Kuwait”. This eventuality worried Shaikh Ahmad as he was concerned that an influx of these merchants into Kuwait would bankrupt their local competitors and cause instability. It is possible that he supported the Mayor’s call for Muttalib’s deportation due to this broader concern.

De Gaury explained to Fowle that the Mayor made the error of attacking a British subject thinking that foreigners would be “easier game” than Kuwaitis and since the Shaikh had “concealed the provisions of the Kuwait Order-in-Council from most of his subjects”, had not realised “that he would in the end encounter me”.

After receiving De Gaury’s letter, Fowle reported the details of the case onwards to the British Government in India in a letter of his own on 5 May 1937.  In this letter, Fowle joked that by using the ‘capital’ of 14 cats, the Lieutenant and the Mayor “could doubtless have started a flourishing business in the restaurant line”. 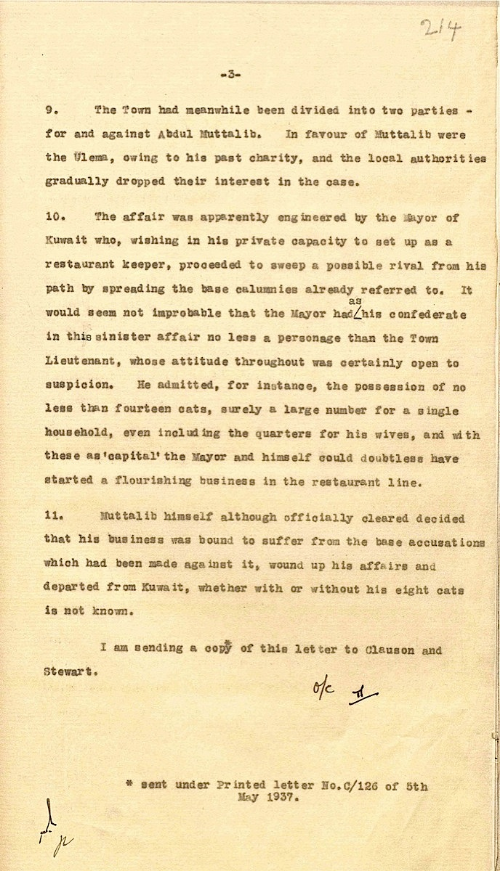 Although the charges against Muttalib were dropped, under the belief that his business would suffer as a result of the accusations nevertheless, he wound up his affairs and left Kuwait. Fowle sardonically remarked that it was not known whether he left “with or without his eight cats”. Thus ended what was known while it lasted as the ‘Kuwait Cat’s Meat Crisis’, and in De Gaury’s words “at one time threatened to be rather serious”.

Although De Gaury may have sympathised with Muttalib’s plight on a personal level, the underlying motivation for the decisive action he took in his support clearly had a wider context. As De Gaury observed, many Kuwaiti subjects were unaware of the depth of Britain’s imperial control over the country and the extent to which the Kuwait Order-in-Council infringed upon on the country’s sovereignty. The crisis therefore served to visibly underline the British Empire’s commanding presence in Kuwait. Muttalib’s almost immediate release from prison and the dismissal of the case against him the next day sent a strong message that all British subjects in Kuwait, even those accused of a crime, were under their government’s protection and could not be arrested or prosecuted by the local authorities.

[1] The Arabian Mission of the Reformed Church in America.

Posted by Ursula Sims-Williams at 9:24 PM