Malay thoughts on the afterlife

Several posts on the Asian and African Studies blog have highlighted a variety of perceptions of worlds to come, from Zoroastrian visions of heaven and hell to Thai Buddhist depictions of future lives in manuscripts of the story of the monk Phra Malai. Reminders of the next world, dunia akhirat, are also found in Malay Islamic manuscripts, but painted with words rather than pigments, for there is no established tradition of illustration in Malay manuscripts.

Two Malay manuscripts in the British Library, Add. 12390 and Or. 6899, which have just been fully digitised, contain slightly variant versions of the Syair Makrifat, ‘Poem on Gnostic Knowledge’, concerning the need to strive in this life in order to reap rewards in the next. The Syair Makrifat is widely thought to be the work of the famous 17th-century Sufi writer and theologian Abdul Rauf from Singkil in north Sumatra, who studied in Mecca for many years before returning to Aceh to serve as Syaikh al-Islam to Sultanah Tajul Alam Safiatuddin Syah, the first queen of Aceh (r.1641-1675). However, Edwin Wieringa (2009: 19) has cautioned that Abdul Rauf never mentioned this poem as his own composition in his many other works of confirmed authorship, all of which are in prose. 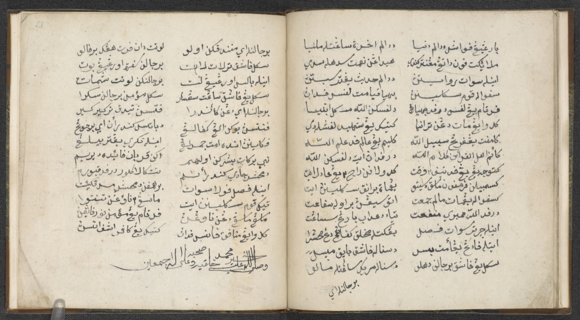 Syair Makrifat, a narrative poem on Islamic doctrine and the transience of worldly goods. The colophon shown above gives the date of copying as 24 Zulhijah, without specifying the year, and the name of the scribe and owner as Da’ut (wa-katibuhu Da'ut yang empunnya syair ini), with instructions to borrowers to take good care of the manuscript and to return it promptly. A scribbled note on f.1r has the date 1222 (AD 1807/8). British Library, Add. 12390, ff.22v-23r.

The version of Syair Makrifat in Or. 6899 ends on f.24r, exhorting borrowers to take care of the book:
‘Mister Umar is the owner of this book / anyone may borrow it
please treat it gently / and don’t let the pages come loose from the stitching’
Encik Umar yang empunya / sekalian orang boleh meminjamnya /
baik-baik sedikit menaruhnya / jangan diberi bercerai akan jaitannya
This manuscript also contains a second poem, Syair Dagang, ‘Ballad of the Wanderer’, which uses the itinerant trader of this life as a metaphor for preparations for the next life.  As Wieringa points out, the two poems are good stablemates as both concern the need to eschew wordly goods and instead look towards the afterlife.  The copy of Syair Dagang in Or.6899, said to have been composed by a man of Melaka, is incomplete, ending abruptly on f.28r on a salutory note:
‘Gold is a formidable material / very dangerous to hoard
if we just relax our guard for just a minute / it can inflict pain worse than a poisonous snake’
Emas itu sangat berbangsa / menaruh dia sangatlah bisa
jikalau lengah kita semena / sakitnya terlebih ular yang bisa 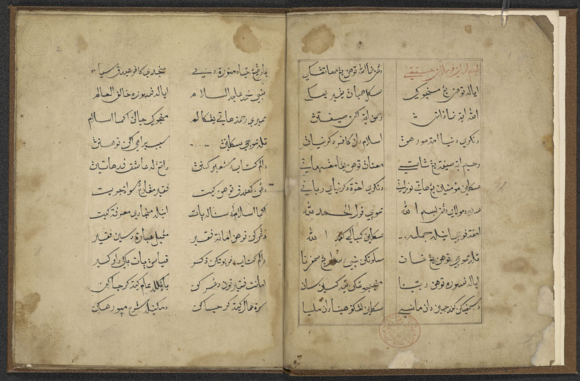 Although Malay manuscripts are not generally illustrated, manuscripts on Islamic mysticism and prayerbooks from Southeast Asia do sometimes have charts or drawings of the attributes of the next world.  A manuscript from Ambon in the Moluccas shown below, recently digitised through the Endangered Archives Programme, is in the form of a long scroll with detailed depictions of the stages of heaven, and similar Islamic manuscripts have been found in the southern Philippines. One manuscript from Mindanao annoted in Maranao portrays on one page the palatial mansion in heaven awaiting the woman patient enough to accept her husband’s taking another wife, while the facing page depicts the hovel in hell awaiting the woman who could not accept her husband’s second marriage  (Kawashima 2012: Fig.30).

Detail from a pictorial scroll depicting the heavens, from the collection of Said Manilet, Ambon.  Captions written vertically in the left margin give the name of each of seven gates (pintu), while a caption in the lower right margin describes these as the gates of heaven (ini pintu syurga). British Library, EAP276/9/17.

Posted by Annabel Gallop at 2:32 AM

Do you have a date for your last illustration pictorial scroll depicting the heavens, from the collection of Said Manilet, Ambon ?

Thanks for your question, John. Since we have no information of the type of paper (and watermark), and the manuscript is not said to be dated, the only proposed dating I could suggest is 18th-19th century, which covers the vast majority of surviving Indonesian manuscripts.