In two recent posts I examined a largely unpublished album of 18th century paintings associated with the Deccan and with the Maratha courts and prior to those posts a newly acquired portrait of Ikhlas Khan, the African minister of the Bijapur sultans.  In this new post I want to look at some other Deccani items acquired since the publication of the Falk and Archer catalogue of Indian miniatures in 1981.  The first is associated with the artist Muhammad Khan, who is well known for his portraits of Sultan Muhammad ‘Adil Khan of Bijapur (reg. 1627-57) and notables of his court.  Two of these portraits are in the British Library (Johnson Album 1,9 and Add.Or.2770, see Falk and Archer 1981, nos. 405-406), while others are in the British Museum and in collections in India and the USA (Zebrowski 1983, pp.127-31).  He signs himself as the son of Miyan Chand, presumably another artist, none of whose work is now known.  Not at all known is the work of his son, Muhammad Husayn, one of whose works was acquired for the collection in 1985.  This is a head and shoulders portrait of the Mughal Emperor Jahangir (reg. 1605-27), a version of one of the bust portraits of that emperor done in the Mughal court during his reign. It is inscribed in Persian on the gold rim of the oval: Mashq-i Muhammad Husayn ibn Muhammad Khan Musavvir (‘copy by Muhammad Husayn son of Muhammad Khan the painter’).  This appears to be the first reference to Muhammad Khan’s son also being a painter.  It is certainly not the equal of his father’s work, but then it may of course be the work of an apprentice as suggested by the unusual term mashq (i.e.copy).

Another copied painting acquired in that same year is also linked with Bijapur.  This shows the founder of the Bijapur dynasty Sultan Yusuf ‘Adil Shah (reg. 1509-11) enthroned with the next four monarchs of Bijapur and being handed the key of royal authority by a Persian figure.  To his right, and slightly smaller and below him, are kneeling his two immediate successors Isma’il (d.1534) and Ibrahim I (d.1557), and likewise to his left are ‘Ali I (d.1579) and Ibrahim II (d.1626).  Attendants behind carry parasols above the sultans.  The painting is by a Deccani artist, apparently about 1750, after a lost Bijapuri original of c.1610.  It is inscribed on a cover sheet in Persian: Majlis-i ‘Adil Shah badshah ma’ah nazdikan  (‘assembly of King Adil Shah with his relatives’). 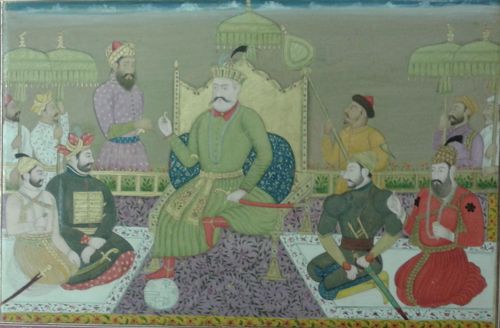 A larger version of this scene including all the Bijapuri Sultans up to the last one Sikandar (reg. 1672-86) is in the Metropolitan Museum of Art, New York (Zebrowski 1983, pl.  XVII).  The New York version would appear to be an accession portrait linking Sikandar with his ancestors back to the founder of the dynasty, who is receiving the keys of royal authority from his Shia co-sectarian Shah Isma’il of Iran.  Our painting would appear to be after a painting that is not an accession portrait but a statement of Ibrahim II’s royal authority, since he is painted fully mature and with a beard; the original would have been the beginning of a tradition of such paintings which added each new ruler at the appropriate time.

A well-known painting showing a lady lying pining on her couch for her absent lover is one of the most important paintings from Hyderabad in the Richard Johnson Collection. 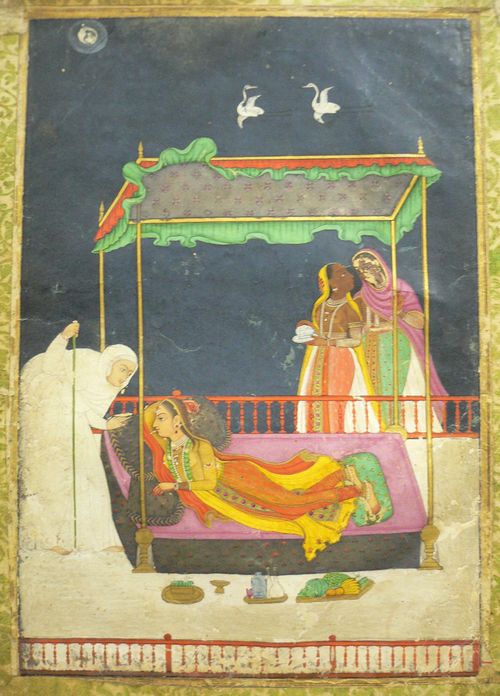 The duenna bends down to whisper to the recumbent lovelorn lady about her absent lover, perhaps suggesting his imminent arrival, while her two maids look at each other knowingly. There is real interaction between the two pairs of women.  The scene is set at night with a full moon and a pair of white cranes starkly silhouetted against the dark background, while the lady’s agitation is suggested by the breeze ruffling the canopy.  Even the cranes seem to have paused in their flight to comment to each other on the goings-on below them. 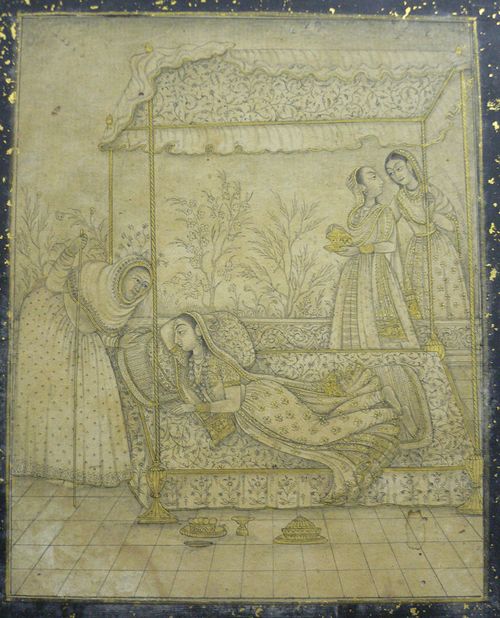 A closely related drawing was acquired in 2010.  The attention to detail in this lively drawing makes it look very finished and not at all a preliminary drawing for anything else.  The artist, being unable to suggest night-time, has substituted clumps of plants, all waving in the breeze that agitates the folds of the canopy above. Delicate designs on the textiles of bedcovers and clothes substitute for the vibrant colours of the painted version.

An album of 75 portraits (Add.Or.4396-4470) depicting principally the courtiers and ministers of the Nizams of Hyderabad ‘Ali Khan (reg.  1762-1803) and Sikandar Jah (reg.  1803-29) was acquired in 1989.  It was assembled originally in Hyderabad in the early 19th century, refurbished about 1900 and presented in 1915 by Nizam Mir Usman ‘Ali Khan to the Viceroy Lord Hardinge.  Inscribed on the fly-leaf is: To His Excellency Lord Hardinge of Penshurst Viceroy of India (with all good wishes) from Mir Usman ‘Ali Khan Nizam of Hyderabad 15th June 1915.

The album is particularly valuable for the large number of portraits and notables of the court of Hyderabad about 1810 in the time of Nizam Sikandar Jah (reg. 1803-29), during whose reign most of the portraits as well as those of earlier rulers seem to have been painted.  These greatly supplement in this respect the collection of Henry Russell, Resident at Hyderabad 1811-20 (Add.Or.1912-47, Falk and Archer 1981, no. 434).  An exception is the portrait of Nizam ‘Ali with his chief minister Aristu Jah in a larger format, which together with three portraits of notables of Nizam ‘Ali’s court in the same format are about 15 to 20 years earlier. 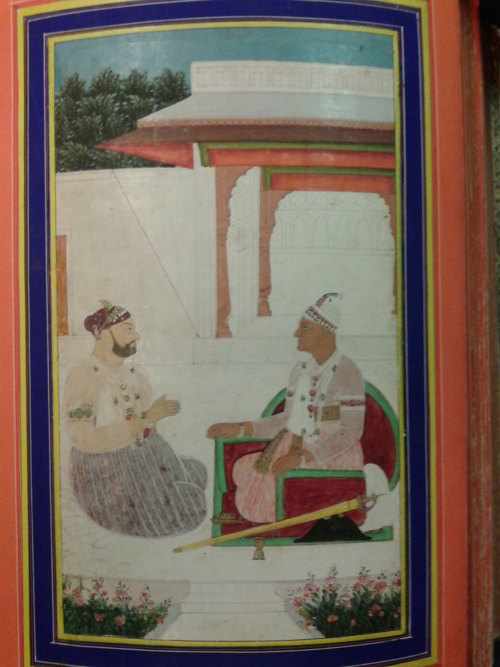 The minister is almost certainly ‘Azim al-Umara Aristu Jah (d. 1804).  His portrait is the same as that in the Victoria and Albert Museum identified as Aristu Jah (I.S. 163-1952, see Zebrowski, Deccani Painting, fig. 247, who misidentifies him as the chief minister of Nizam Sikandar Jah).  Despite his reputation as a wily politician, he was responsible for the disaster at Khardla in 1794 that befell the Hyderabadi forces in their encounter with the Marathas and spent two years imprisoned in Pune.

Finally in this brief selection is this delightful equestrian portrait of Lieutenant John Gustavus Russell, acquired in 1992.  Russell is accompanied by sowars of the Kurnool Irregular Horse, and is riding in a flowery landscape in front of a Muslim tomb typical of Kurnool architecture.  Inscribed on the wooden back-plate of the frame is: Blacklock an Arab Horse I had ten years.  Never lost a 1st Spear out Hog hunting when I rode him.- I spent £50 for him as a 3 year old and refused £300 when in his prime.- Dead.  Rosie a terrier my Constant Companion halting or travelling for 14 years, she is Still Alive. John G Russell.  4 April [18]53.  P.S.  The drawing is made by a native.  The horse & dog are right - but the rider not - I did not sit for it. 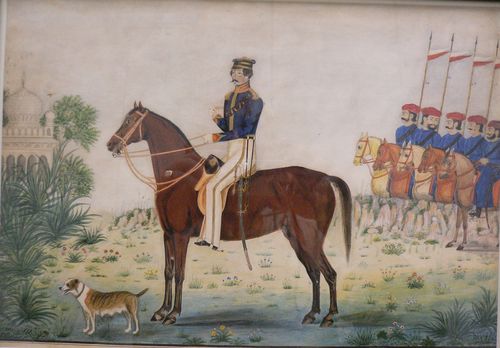 Kurnool, some 120 miles south of Hyderabad, became in the 18th century semi-independent under its own Pathan Nawabs.  It was captured by Haidar ‘Ali of Mysore, and in 1799 was given to the Nizam at the division of Tipu Sultan's territory.  It was ceded by him to the East India Company in 1800, although the Nawabs were left in charge in return for a tribute to Madras.  The last of them was judged guilty of treasonable activity in 1838 and the territory was annexed, although left in the charge of a British Commissioner and Agent until 1858 rather than under the normal Collector and Magistrate of British India.  The arts flourished under the Nawabs and an offshoot of the Hyderabad style of painting can be located there (Zebrowski 1983, pp. 272-3).  In the 19th century Kurnool produced paintings on leather of both Hindu and decorative subjects, but this painting by Kurnool artist would seem to be a rare instance of a Deccani ‘Company’ painting.  The artist has combined a delicate Deccani approach to landscape with the more naturalistic traditions associated with European portraiture.

John Gustavus Russell (b. 1817) first served in the 29th Madras Native Infantry in 1838 when based at Jalna near Aurangabad in the Nizam’s territory.  By 1846 he was placed in charge of a portion of the Kurnool Irregular Horse, a cavalry regiment formed from the numerous Pathan retainers of the Nawabs of Kurnool after the last one was deposed in 1838.  He remained in Kurnool until 1858, from 1849 as Assistant to the Governor of Madras's Agent at Kurnool, himself acting as Agent from 1856-58.  He was promoted to Captain in 1856. The role of Agent was abolished in 1858, when Kurnool was treated like a regular Madras District for the first time, and Russell from 1859-61 acted as Paymaster to the Malabar and Kanara Force, and then the Nagpur Force; he retired early with the rank of Major on 1 October 1861.