Persian letters from the Nawabs of the Carnatic 1777-1816

Following the Seven Years War or, in India, the Third Carnatic War (1757-63), the Nawabs of Arcot (styled Walajah)—former dependents of the Nizam al-Mulk of Hyderabad—were confirmed as independent rulers of the Carnatic region of India (covering Tamil Nadu, Andhra Pradesh, and Telangana states) by the Mughal Emperor, Shah ‘Alam, in 1765. Fostering relations with European settlers establishing military outposts along the Coromandel Coast, at Pondicherry (Puducherry) and Madras (Chennai), for example, the nawabs became closely involved with the transactions and officials of the Honourable East India Company, the British parliament, and even members of the Hanoverian royal family. The character and extent of these relations is reflected in the record of correspondence, treaties, and legal documents of the time. The British Library has inherited from the India Office Library a small collection of such correspondence, consisting of 12 letters in Persian (the official and literary language of the Mughal state), from which a small selection is described here. These were described by M.Z.A. Shakeb in 1982 in a short catalogue which has long been unavailable. A PDF version can be downloaded here. 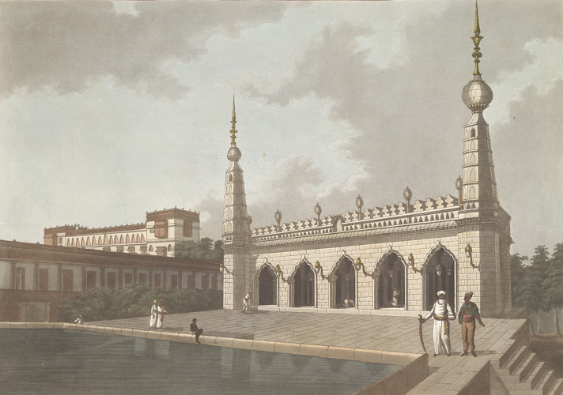 Aquatint based on a picture by Francis Swain Ward (1736-1794) of the mosque adjoining the palace of the Nawab of Arcot at Tiruchchirappalli, Tamil Nadu. Plate 1 from 24 Views in Indostan by William Orme, 1803 (British Library X768/2/1)

The letters written by or issued in the name of the nawabs are on thin oriental paper and are unified as a group by a number of common features: 1) the narrow, vertically elongated scroll format; 2) the placement of ruled panels of text in the lower left corner leaving broad margins along the upper and right edges; 3) floral motifs in gold; 4) 2 separate cartouches for a short invocation followed by the fuller quotation of the koranic basmalah (Qur’an, XXVII:30); and 5) fine flecks of gold (zar afshani) within cartouches and panels of text. 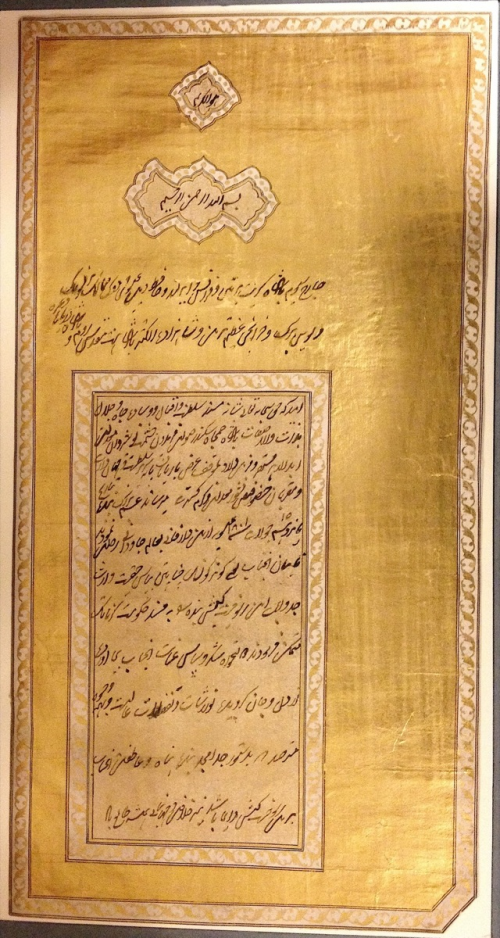 The first of these letters, IO Islamic 4359, is distinguished by broad margins covered in opaque gold wash surrounding the ruled panel of text. In keeping with conventions borrowed from imperial ordinances (farmans), this opulent effect is commensurate with the importance of the letter’s addressee, George III, described as

King of Great Britain, France, and Ireland, Defender of the Christian faith, Duke of Brunswick-Lüneburg (Hanover), Chancellor and Prince-Elector of the Holy Roman Empire, Emperor of the Oceans, etc…

Written in an uneven Indian ta‘liq hand by the third nawab, ‘Azim al-Dawlah, the letter announces the death of the second nawab, ‘Umdat al-Umara, on 15 July 1801, and confirms his own accession with the aid of the East India Company. 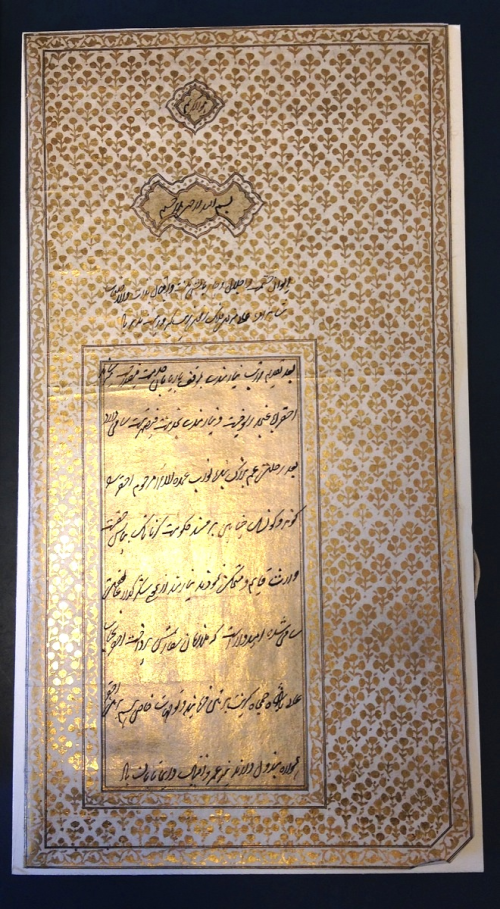 The designs of letters communicating with other members of the British royal family are less opulent, but no less attractive, with repeated floral motifs in diaper arrangement, loosely painted in gold. The contents of letter IO Islamic 4361 are similar in tenor. Written again by the same nawab, this time in a more legible hand, it additionally requests the intercession of the Prince of Wales (George Augustus Frederick, later Prince-Regent, later King George IV) with his father, the king. 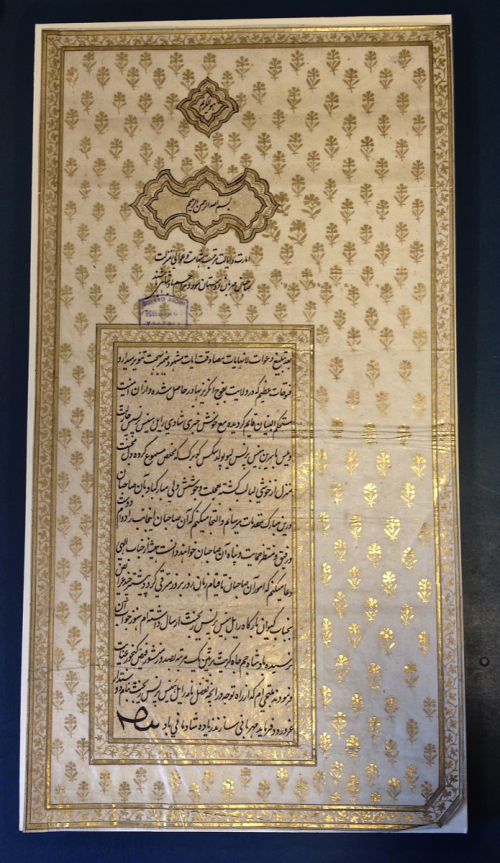 Letter written in 1816 from ‘Azim al-Dawlah, Nawab Walajah III, addressed to the Directors of the East India Company congratulating them on the marriage of Princess Charlotte to Prince Leopold of Saxe-Coburg-Saalfeld (British Library IO Islamic 4252)

Following a similar design scheme, the letter IO Islamic 4252 addresses this time officials of the East India Company. Commencing with a reference to the Battle of Waterloo (1815), the letter congratulates British forces on their ‘great victory’ in Europe (referred to here as vilayat) before going on to express pleasure at news of the marriage of the Prince-Regent’s daughter, Charlotte Augusta, Princess of Wales, to Prince Leopold Saxe-Coburg-Saalfeld, Duke of Saxony (later Léopold I, King of the Belgians), in 1816. The primary object of this letter is set out in the final few lines: to remind the Prince-Regent of his neglect in replying to earlier petitions, whereas the king did favour the nawab with a reply.

While other letters were written in the nawab’s own hand, this letter is written in a neat nasta‘liq hand by a practiced scribe. That its transcription was supervised by the nawab himself is indicated by the addition at the end of the text (bottom left corner) of the bold and stylised word, bayaz (fair copy), thus validating the letter’s authenticity. Perhaps one of the least typical of this assemblage is the design and character of the letter IO Islamic 4251. Although lacking any ornamentation, defined panels and cartouches of text within rulings, and the narrow, elongated format seen in the previous 3 examples, it consists of 2 thin sheets of silver and gold-flecked paper (sim va zar afshan) covered on both sides in a densely-written nasta‘liq hand.

Written and composed by Muhammad Anvar Khan, brother of the second nawab, the first part of the letter sets out arguments disputing the East India Company’s decision to invest ‘Azim al-Dawlah as the third Nawab of Arcot. Although polite and coached in diplomatic prose, the letter is surprisingly direct in its expression of the extended nawabi family’s strong displeasure, specifying objections on grounds of illegitimacy, inheritance and succession rights under the shari‘ah, the author’s superior claims to the seat (masnad), and possible benefits to the Company if he were to succeed.

The second part of the letter discusses in greater detail the dynasty’s status as the confirmed rulers of the Carnatic region, the genealogy of the main claimants, the author’s claim, and the way in which the East India Company managed the succession. Taken as a whole, the letter vividly illustrates inherent tensions between the nawabs and the East India Company, which eventually took over the administration of the nawab’s domains following the Fourth Anglo-Mysore War (1798-99).