In the first part of this blog post, we mentioned that the major star festivals marking Tanabata are celebrated not on 7 July, but a month later. Scientifically speaking, keeping the latter traditional (lunar) date makes more sense, because the two stars are more easily visible on this day than on the modern (solar) calendar day.

Currently Vega represents Orihime (Zhinü in Chinese) and Altair is Kengyū (Niulang in Chinese) in the actual summer night sky. Both of them are among the top 10 brightest stars in the night sky and this pair is visible at the same time of the year, at the highest point in the sky, so it is easier for us to spot them. Let’s compare the two star attitude charts, one for the solar date 7 July and one for 2 August 2014, which corresponds to the 7th day of the 7th lunar month 2014. 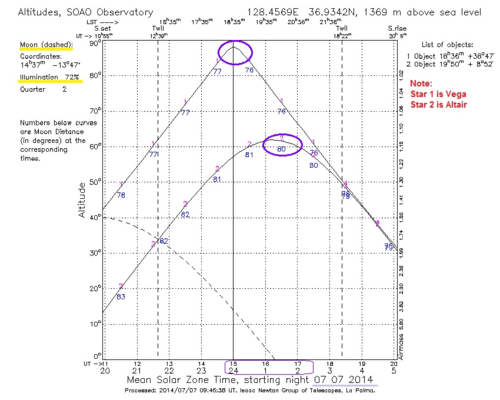 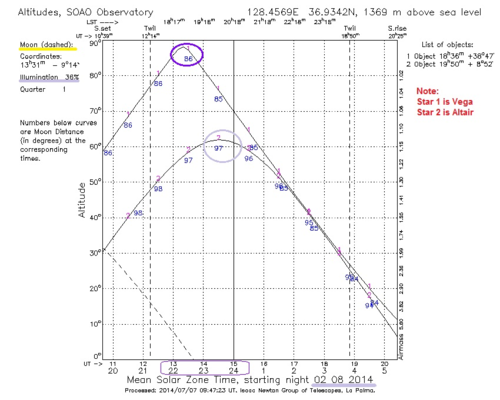 Stellar visibility plots for Japan's latitude on 2 August 2014, calculated with the STARALT program.

On 7 July, Vega and Altair reach their highest point in the sky, being directly overhead, around midnight. On 2 August, the above-mentioned two stars reach their maximum elevation earlier than on 7 July.

Generally speaking, 90 degrees means stars take positions straight above our heads, while 20 degrees is too near to the horizon – and obstructed by objects such as buildings and trees – for them to be seen. In addition to the timing of better visibility, the moon is brighter on 7th July than on 2nd August. When the moon is brighter, the stars look fainter. Consequently, the traditional day is the better option to see the stars and people have more time to enjoy festivals in the evening.

Since the earliest version of Chinese legend, Zhinü has always been (and still is) associated with Vega (also known as α Lyrae in Western astronomy), which is the second-brightest star in the Northern hemisphere. Vega is the brightest star in the Chinese asterism known as ‘The Weaving Girl’ (織女Zhinü) which is located in the Ox mansion (牛宿Niu su), on the west side of the Milky Way.  In contrast, Zhinü’s counterpart on the other side of the Milky Way has changed over the centuries. The original star for Niulang was Niu su yi (牛宿一 meaning ‘The First Star of Ox’), also known as β Capricorni, or Dabih Major in Western astronomy. This is the brightest star of the Ox asterism, which is also in the Ox mansion but on the eastern side of the Milky Way; β Capricorni has an apparent brightness of +3 magnitudes, and is not as bright as Vega, which has a brightness of 0 magnitudes, that is, approximately 15 times brighter.

Perhaps this difference between the brightness of Zhinü and Niulang in the original version is the reason why the star of Niulang was later changed, as this story became a more popular folktale. The new choice of the star for Niulang was Hegu er (河鼓二meaning ‘The Second Star of the Drum at the River’) which is known as Altair in Western astronomy. Altair is in fact the brightest star in the Chinese asterism He gu (河鼓 meaning ‘The Drum at the River’), which is also located within the Ox mansion on the eastern side of the Milky Way. Altair is about half as bright as Vega. Due to its folktale association, it is better known today in China as Niulang xing (牛郎星 meaning ‘The Cowman’s Star’). 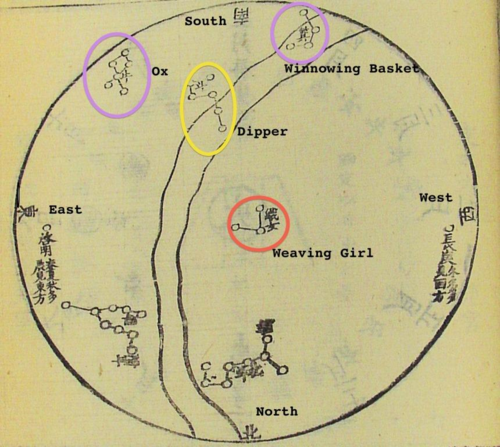 Map of the stars in the Eastern sky. Shi jing zhuan shuo (詩經傳說), detail from a woodblock printed Qing dynasty illustrated version of the Classic of Poetry, 1727. Niulang was probably still Niu su yi (牛宿一 'The First Star of Ox') when the original illustration was published in earlier editions. This could be the reason why there were no signs of He gu (河鼓 'The Drum at the River'), because it had no particular significance at that time of illustration. British Library, 15266.a.2, vol. 1.

At the same time, we can also see the Magpie Bridge in the summer night sky. Unfortunately because the location of the Milky Way and of the asterisms in the above illustration is only approximate, it is not possible accurately to identify which was Tian jin si (天津四 meaning “The Fourth Star of the Celestial Ford”) which is Deneb in Western astronomy. Deneb was thought to mark the location of the bridge across the Milky Way like a stepping-stone. The three stars Vega, Altair and Deneb form what is known as the Summer Triangle.

Now, let’s compare the illustration of the star map, which was taken from the Shi jing zhuan shuo and actual summer night sky. 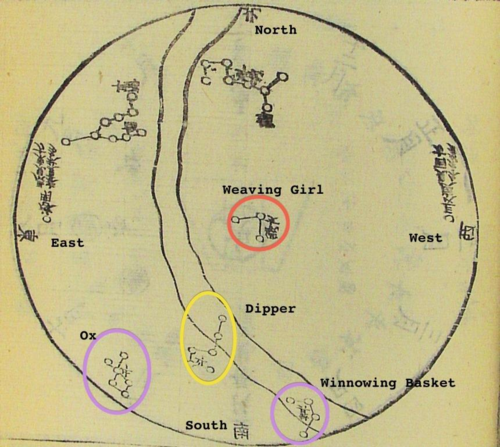 In this picture, we have flipped vertically the original Chinese illustration shown above, so that it is oriented to match the modern star chart below. British Library, 15266.a.2, vol. 1. 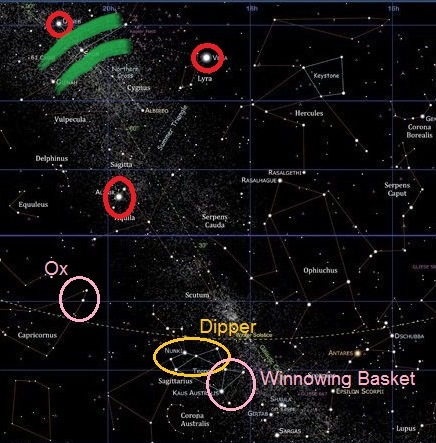 The red circles mark the three stars of the Summer Triangle and we have sketched in green the approximate location of the magpie bridge. © 2000-2005 Kym Thalassoudis. All rights reserved.

So let’s look up the night sky on 2nd August 2014 and make a wish on these three fascinating stars!

With special thanks to Sara Chiesura, Curator, Chinese collections

Posted by Annabel Gallop at 5:06 AM