Even if the attendant or station inspector had shouted ‘Mind the Gap’ (the phrase first used in 1969 at rail stations in the United Kingdom), it would not have prevented the horrific accident that befell Sir Donald Friell McLeod at the railway station at Gloucester Road in 1872. Arriving at the Metropolitan Line platform on 28 November, the station inspector told McLeod that he was too late to catch the train heading towards South Kensington; moments later, he shouted ‘stop, you will be run over’ (London Standard, 3 December 1872).

In investigating the accident, the Belfast News wrote on 4 December, ‘It seems that he must have attempted to enter his compartment while the carriages were already in motion, and that, falling with the sudden and violent movement of the train, he was dragged along for several yards. The right arm, which probably to the last had retained its hold upon the platform and footboards, was uninjured. But the left arm and both legs were nearly severed from the body, although the train was stopped with praiseworthy promptitude.’ Sir Donald McLeod, formerly the Lieutenant-Governor of the Punjab (1865-70), died at St George’s Hospital later that day.

As an important figure in Anglo-Indian history, McLeod spent the majority of his life in the subcontinent. Born in Calcutta in 1810, he was the younger son of Lieutenant-General Duncan McLeod (d.1856) of the Bengal Engineers. When he was only 4 years old, McLeod was sent to the Scottish Highlands and raised by his grandfather. Educated in Edinburgh and London, he went on to attend the prestigious East India College at Haileybury before returning to Calcutta in 1828. McLeod entered into service for the East India Company and served as the Judicial Commissioner of the British Punjab in 1854 and ultimately as the Lieutenant-Governor of the Punjab between 1865-70. A devout Christian, McLeod committed his life to various philanthropic projects including helping to establish the University of Punjab (Lahore), also known as the Lahore Oriental University. 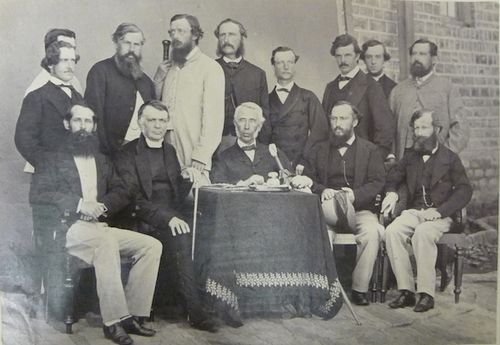 Whilst living in the Punjab, the stories of McLeod’s philanthropy and devoutness captivated the locals. According to the entry in the Oxford Dictionary of National Biography, ‘cheap coloured lithographs circulated in Lahore showing him seated as a holy man being venerated by Sikh ascetics’. Although I could not locate a lithograph of the subject, I was surprised to locate a painting of the exact subject in the Wellcome Collection (London). In the scene below, the artist depicted Sir Donald McLeod seated on a cushion with his legs crossed and with his head encircled in a nimbus and accompanied by putti; these attributes, along with the attendant holding a flywhisk, which is of course an insigna of royalty, are suggestive that the artist or patron revered McLeod as royalty. 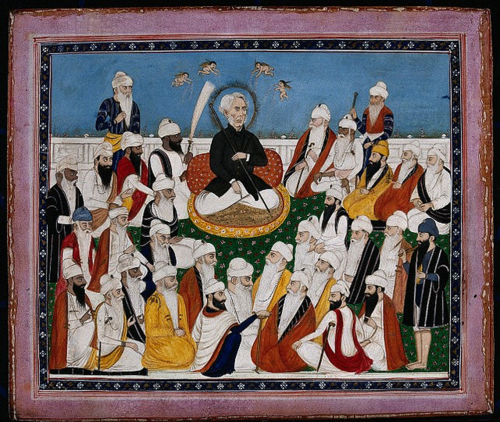 Local artists continued to be fascinated with McLeod, even after his return to England. A fascinating yet somewhat peculiar painting substantiates this claim. A painting in the British Library, by a Sikh artist, depicts the artist’s interpretation of the horrific accident at Gloucester Road station. While incident reports as well as obituaries in UK newspapers provided detailed accounts on McLeod’s death, the story must have been printed in either local English or Punjabi newspapers in Lahore. 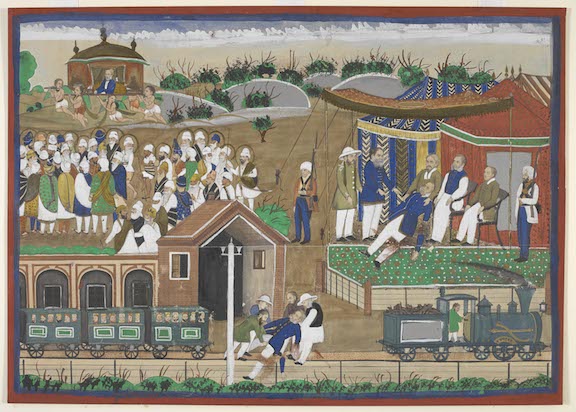 The accident that befell Sir Donald Friell McLeod at Gloucester Road underground station, 1872, and its aftermath. By a Punjab artist, c.1885. Water-colour heightened with bodycolour and gold, on paper laid on card; 342 by 482 mm. British Library, Add.Or.5266.

In the painting (above), we see the artist’s personal interpretation and understanding of the details of the accident. In the lower left corner, four members of the British public have come to McLeod’s aide and assist to remove him from the railway track. In nearby train carriages, curiously both British and Punjabi-Sikh figures observe the accident. The story continues to unfold with McLeod being transferred to the tent (middle-right) where British political aides tend to the injured. Based on the photograph of McLeod taken at Murree (at top), I wonder if the three men closest to McLeod are the Judicial Commissioner Mr. Roberts, Captain Alexander Taylor (holding McLeod) and the Right Reverend Dr. George Edward Lynch Cotton (d.1866)? From this point, the viewer’s focus is directed to the upper left corner of the painting where Sikh ascetics and members of the prestigious Akali Sikh military order bid farewell to McLeod who is carried away by angels on a palanquin. 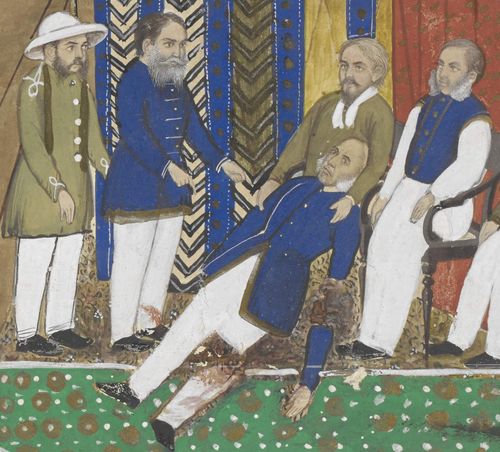 Detail of the painting

As McLeod passed away within hours after the accident and was  buried in Kensal Green Cemetery in London, it is rather strange and curious that the artist transported the incident to the Punjab, where both Punjabi-Sikhs and British officers witnessed the event and were with him during his final moments. However, as the local community revered Sir Donald Friell McLeod, the painting is  appropriate to commemorate McLeod.