A new catalogue of Malay and Indonesian manuscripts in British collections

British libraries and museums hold some of the oldest and most important manuscripts in Malay and other Indonesian languages in the world. Although small by comparison with manuscript holdings in Indonesia, Malaysia and the Netherlands, British collections are especially notable for their antiquity and, in some cases, contain unique copies of important texts. 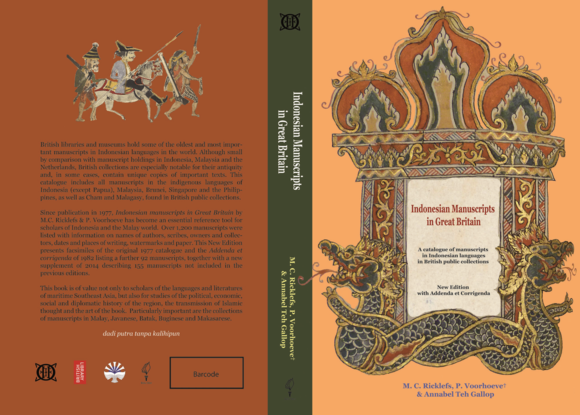 New Edition of Indonesian manuscripts in Great Britain (Jakarta, 2014), the front cover design based on the wadana (illuminated frame) from the Javanese manuscript Serat Jayalengkara Wulang shown below. 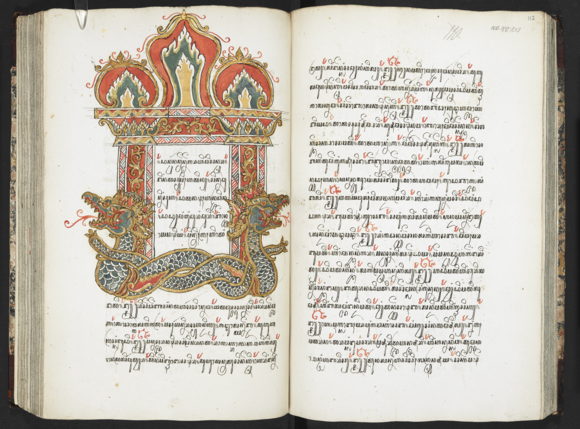 Serat Jayalengkara Wulang, Javanese manuscript copied at the court of Yogyakarta in 1803. One of the many Indonesian manuscripts described in Ricklefs and Voorhoeve (1977: 61), and which has just been digitised. British Library, MSS Jav 24, ff.111v-112r.

The publication in 1977 of Indonesian manuscripts in Great Britain: a catalogue of manuscripts in Indonesian languages in British public collections, by M.C. Ricklefs & P. Voorhoeve (Oxford University Press), was a landmark event. Merle Ricklefs, whose main interest was in Javanese, was at the time Lecturer in the History of Southeast Asia at the School of Oriental and African Studies, London. Petrus Voorhoeve (1899-1995) was formerly Keeper of Oriental Manuscripts at Leiden University Library, and a great expert on the languages of Sumatra – ranging from Acehnese and the various Batak dialects in the north to Lampung and Rejang in the south – as well as on Malay and Arabic. The catalogue listed over 1,200 manuscripts in the indigenous languages of Indonesia (except Papua), Malaysia, Brunei, Singapore and the Philippines, including those in Cham and Malagasy, found in British public collections. Catalogue entries included names of authors, scribes, owners and collectors, dates and places of writing, watermarks and paper. The 1977 volume was soon followed by an Addenda et corrigenda, published in the Bulletin of the School of Oriental and African Studies in 1982, listing a further 92 manuscripts.

When I joined the British Library in 1986, I very soon became aware of how difficult my task as Curator for Maritime Southeast Asia would have been without the helping hand of ‘Ricklefs & Voorhoeve’.  As the indispensible guide to the British Library’s own collection of nearly five hundred manuscripts in Malay, Javanese, Balinese, Batak, Bugis, Makasarese, Old Javanese, I found myself consulting the book on a daily basis in order to answer enquiries about the British Library collections, and to select and describe manuscripts for exhibition, and, more recently, for digitisation. 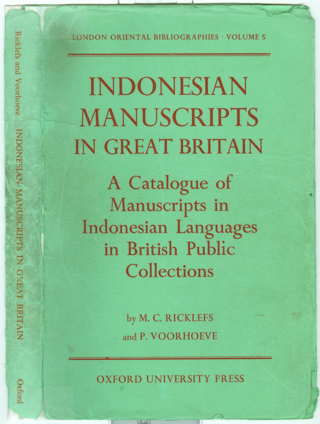 While ‘Ricklefs & Voorhoeve’ continued to be of enormous value to scholars of the languages, literatures, cultures and history of maritime Southeast Asia, it became increasingly difficult to find a copy in bookshops. And so in March 2013, Arlo Griffiths, director of the Ecole française d’Extrême-Orient in Jakarta, agreed to republish the catalogue in the EFEO’s valuable series Naskah dan Dokumen Nusantara (Manuscripts and documents from maritime Southeast Asia). The New Edition, which was published in Jakarta last month by EFEO in collaboration with Yayasan Pustaka Obor Indonesia, and with the support of the National Library of the Republic of Indonesia and the British Library, presents facsimiles of the original 1977 catalogue and the Addenda et corrigenda of 1982, together with a new supplement of 2014 describing 155 manuscripts not included in the previous editions.

The 155 additional manuscripts cover the following languages: Balinese (15), Batak (11), Bugis (2), Cham (1), Javanese (31), Maguindanao (1), Malay (86), Minangkabau (2), Old Javanese (5) and Tausug (1).  Nearly three-quarters of the total (114) are held in the British Library, and include both long-held but newly-documented manuscripts in Austronesian languages - such as the treaties in Tausug and Malay signed with the sultanate of Sulu in the 1760s, and vocabulary lists in various Indonesian languages collected by servants of the East India Company - and recent acquisitions, such as two Malay manuscripts of Sejarah Melayu and Hikayat Hang Tuah transferred to the British Library from the University of Lampeter in Wales in 2003. Notable finds in other institutions include four Batak manuscripts acquired by the University of Hull from the estate of Dr Harry Parkin - author of Batak fruit of Hindu thought (1978) - and now held in the Hull History Centre; six Malay and one Balinese manuscript formerly belonging to Sir Harold Bailey and now in the Ancient India and Iran Trust in Cambridge; and a Malay manuscript of Hikayat Muhammad Hanafiah in the Brotherton Library, University of Leeds. Shown below are some of the newly-described manuscripts.

Illustrated Balinese manuscript on palm leaf with scenes from Ādiparwa, with the (unusual) use of red pigment in addition to black ink. Acquired in Bali in late 1938 by George and Ethel Fasal and donated by their daughter Jenny Fasal in 2010. British Library, Or.16802, f.4r (detail). 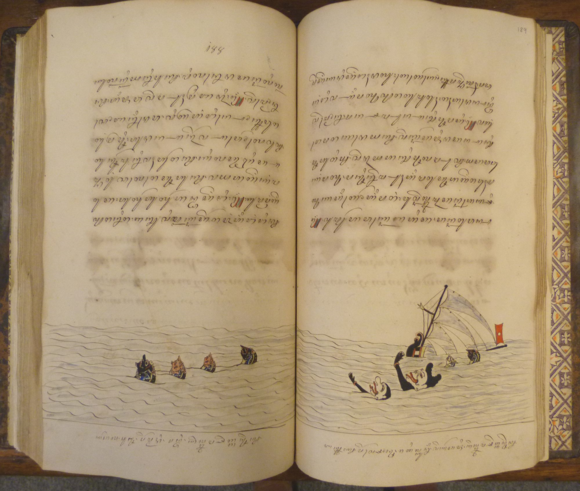 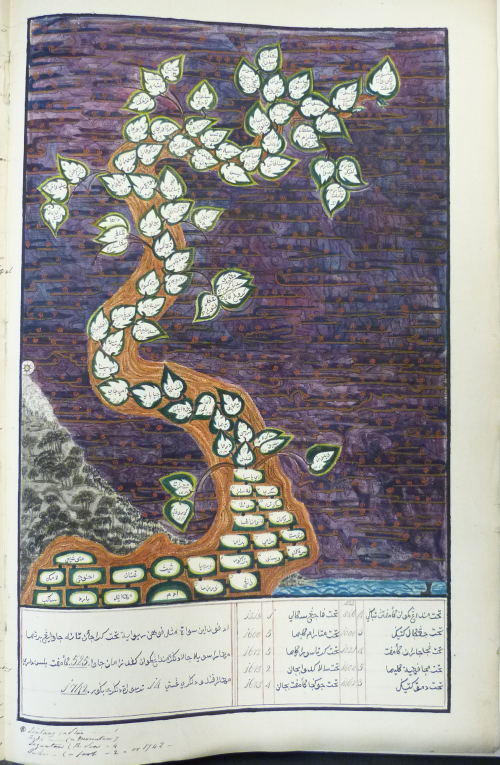 Genealogical chart in the form of a tree of the rulers of Java, from Adam to Pakuwana IV (of Surakarta) and Mataram IV (Hamengkubuwana IV of Yogykarta), in a Javanese manuscript, Papakem Pawukon, said to have come from Kyai Suradimanggala, Bupati sepuh of Demak, 1814/5. Formerly from the India Office Library collection. British Library, Or.15932, f.72r. 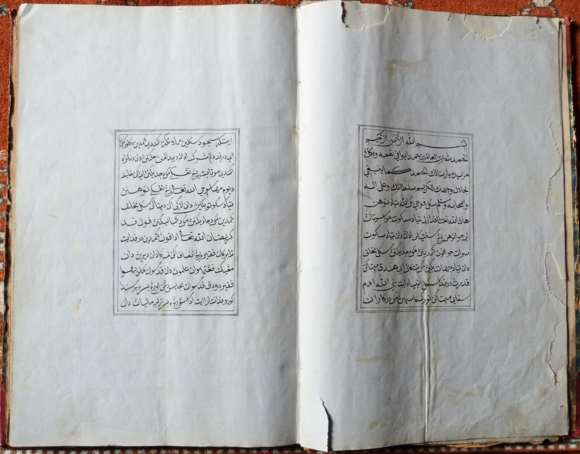 Posted by Annabel Gallop at 3:28 AM