The British Library’s collections contain many drawings by the amateur artist Sir Charles D’Oyly of the Bengal Civil Service who was based in Calcutta, Dhaka and Patna from 1797 to 1838.  The artist George Chinnery spent much time staying with D’Oyly during the first part of his career and had a great influence on the development of his artistic style.  D’Oyly was a prolific artist and published many books with engravings and lithographs from his drawings.

This post focusses on some of the highlights of one his albums in the Hastings’ Collection acquired in 1995.  The album contains 28 water-colours by D’Oyly of views taken on a journey along the Hooghly, Bhagirathi and Ganges Rivers dated August-October 1820 (WD4404).  The voyage passed many monuments and views made famous by earlier artists such as William Hodges and the Daniells, but with the opening of the direct railway line from Calcutta to Benares, these sites were largely forgotten.  The drawings are of various sizes and are laid down on album pages (18 by 26.5 cm), with inscribed captions on the facing page.  All the drawings have been digitised and may be found on the BL’s website by entering WD 4404. 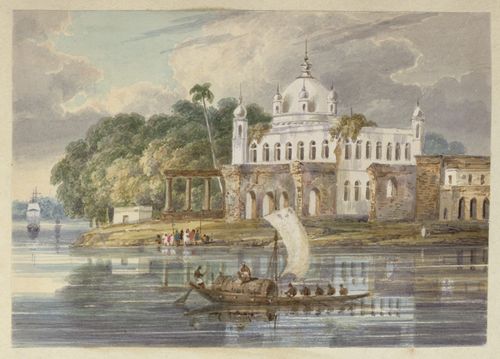 At Kandi the Jalangi came in from the Ganges to the north-east.   This is meant to be a drawing of a temple built by Ganga Gobind Singh there.  Ganga Gobind Singh conducted Warren Hastings’s business affairs and retired with an immense fortune to his native place at Kandi where he erected temples to Krishna. 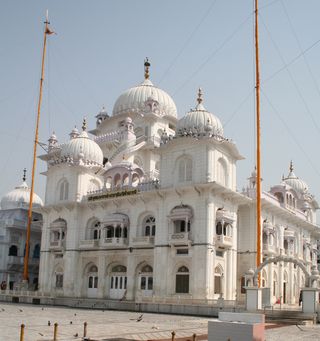 D’Oyly seems to have got his drawings into a muddle since the temples at Kandi are typically Bengali in style whereas the view here shows the Takht Sri Harmandir or Patna Sahib, the gurudwara recently erected by Maharaja Ranjit Singh over the birthplace in Patna in 1660 of the last of the Sikh Gurus, Guru Gobind Singh.  The similarity of their names may have caused D’Oyly’s confusion. 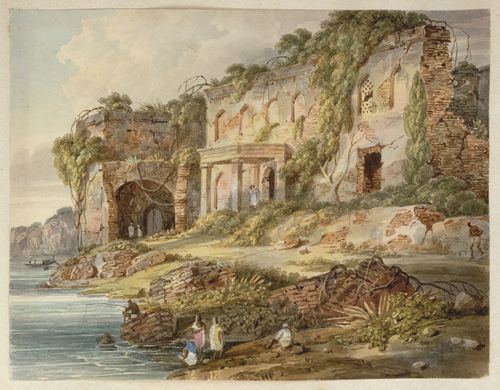 Rajmahal was established as the Mughal capital of Bengal in 1592 by Raja Man Singh of Amber, the Subahdar of Bengal.  His successors moved the capital to Dhaka but Shah Shuja’ moved it back again in 1639 and the palace buildings on the river date from his period. 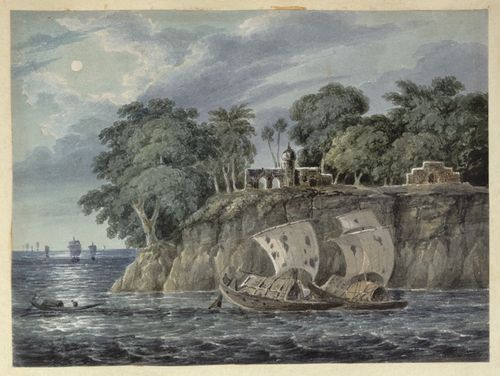 Pirpainti is a picturesque spot where the Ganges bends southwards round the Rajmahal Hills.  The tomb of an obscure Muslim saint known as Pir Painti is on the hill above the village. 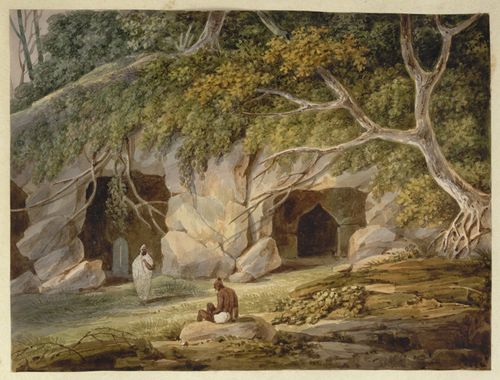 At Patharghat just to the east of Bhagalpur a group of five excavated caves with early sculpted reliefs and with adjacent bas-reliefs of the fifth century formed some of the first examples of ancient Hindu sculpture that British travellers up-river would encounter. This view is not of a mosque but of the mausoleum of Ibrahim Husain Khan, built in a late Mughal style in the 18th century on a bluff above the river. 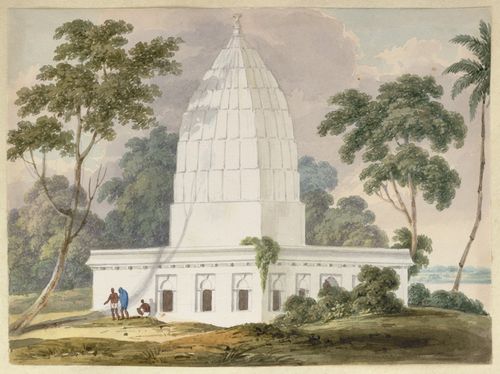 The Clevland monument.  Inscribed: ‘N20 Monument erected by the natives of the Bhaughulpoor District to the memory of Augustus Clevland Esqr.  Sept 1820.’  WD4404, f.20.

Augustus Clevland (1755-84) was the Collector and Judge at Bhagalpur who managed to tame the wild Paharia, or hill people, who used to swoop down on the people of the plains from their hilltop fastnesses on top of the Rajmahal Hills.  In 1780 he founded an irregular regiment from these men called the Bhagalpur Hill Rangers.  After his early death in 1784, two memorials were erected to him in Bhagalpur, one in stone sent by the Court of Directors from England (see next), the other, almost a shrine, built by the inhabitants of Bhagalpur. 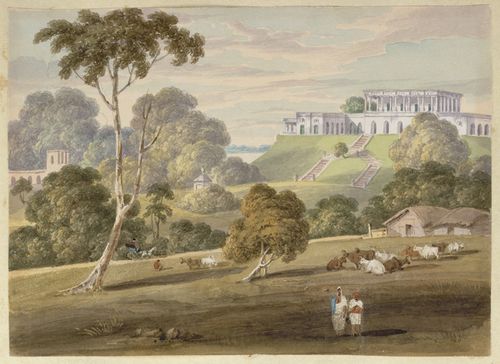 This view shows behind a clump of trees the tasteful memorial to Clevland erected by the East India Company while in the distance is Clevland’s own Hill House. 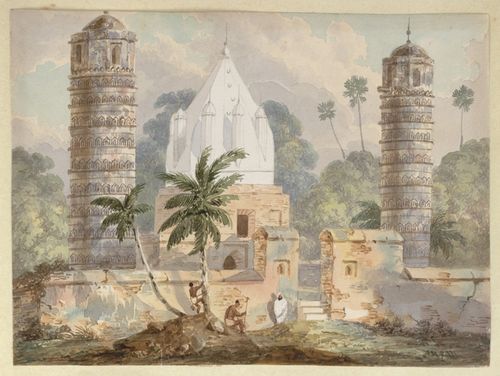 The site at Champapur, the capital of the ancient province of Anga, just west of Bhagalpur, is associated with the 12th Jain Tirthankara, Basupujya.  The temple was in fact a Jain one apparently renovated in the 18th century by the great banking family of Jagat Seth.  The ancient pillars were a cause of much speculation at the time but are thought to be Kirtistambha or Pillars of Fame. 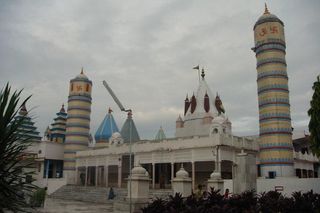 The Digambara Jain temple at Champapur.