The Magic of Birds

Our guest blogger Celia Fisher is an art historian and plantswoman who has written extensively on the history of plants in art. Her new book Magic of Birds is based on the collections at the British Library (published September 2014). Celia writes:

The Magic of Birds – my new book published by the British Library this month – ranges across time and continents, exploring the ways in which artists, poets, storytellers and explorers have depicted birds. Although the book is not entirely about birds from the East, they appear throughout. One chapter is devoted to the Eastern fables – including the search for the legendary simurgh – which gave Persian and Mughal artists the opportunity to depict gatherings of curious and beautiful birds. In the West the concept of the simurgh developed into the phoenix, but it was originally believed to be an inhabitant of the Far East, where it was depicted as an enormous pheasant. The techniques and mysticism of Chinese and Japanese album paintings are described at this point, and also spill over into other chapters. For instance ‘Decorative Birds’, as well as peacocks, includes a crane flying against the sun from a Japanese album, and a keen-eyed cormorant juxtaposed to those which twist around the pages of the Lindisfarne Gospels. 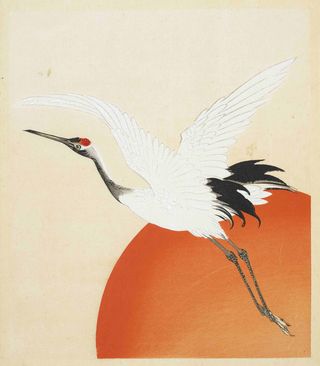 The first chapter, entitled ‘Creation and Diversity’, begins with God creating the birds, travels through the discovery of new continents, and ends with Alfred Wallace’s descriptions of birds of paradise, which had been traded across Asia for centuries before they contributed to his theory of evolution. The chapter on ‘Freedom, Hunting and Captivity’ features the Mughal Emperor Babur with the bird-catchers of Kabul, as well as his ancestor Tamburlaine hunting peacocks; and contrasts two fierce-eyed hawks from a Japanese album, one flying free across the mountains, the other itself a tethered captive. When ‘The Symbolism of Birds’ is discussed, the use of cockerels for divination as well as food – and cockfighting – proves a world-wide phenomenon, but all domesticated poultry are descended from the red jungle fowl of central South East Asia. Their spread towards Europe and America happened surprisingly early, while China became the centre for developing rare breeds. Another widespread phenomenon is a fear of owls as birds of ill-omen, and in the chapter on that theme Dürer’s owl is set beside two horned owls perched on a ruined palace, discussing the fate of the Persian Emperor Anurshirvan’s troubled domains. On a lighter note, the section on ‘Winged Spirits and Messengers’ includes the hoopoe which acted as a messenger between Solomon and Sheba; the varied messenger pigeons bred by the Mughal Emperors; and the Hindu god Garuda flying to the rescue.

The crow deciding whether the owl should lead the assembly of birds. A miniature painting from Anvar-i Suhayli, a version of the Kalila va Dimna fables, India, 1610–11. Add. Or. 18579 f.210v.

Added to this sumptuously illustrated background of South Asian and Far Eastern beliefs relating to birds, there are many images and descriptions taken from the early European publications on the natural history of birds. These include the wonders of the East, hornbills and kingfishers, parrots and dodos, not to mention the birds of Australia, and they provide the balance of scientific bird illustration, alongside fascinating descriptions of bird behaviour and – once again – their relationship to humans, including humour.