Two Persian ‘Ming’ manuscripts on view at the British Museum

Last week the BP exhibition Ming: 50 years that changed China opened at the British Museum. This exhibition documents the years 1400-1450, fifty years which saw the building of the Forbidden City and Beijing established as the capital city of China. It was also a time of intense diplomatic and cultural engagement with Asia, Africa and the Middle East. Some surprising exhibits on view resulting from cultural exchanges include the painting of a giraffe presented to the Yongle Emperor in 1414 as tribute by the Sultan of Bengal, Sayf al-Din Hamza Shah, and ‘The adoration of the Magi’, dating from c. 1495-1505, by the Italian artist Andrea Mantegna, depicting a Ming porcelain bowl. Equally exotic are two British Library 15th century Persian manuscripts, Add.16561 and Add.7759 copied in Shirvan and possibly in Herat on decorated paper exported from Ming China. 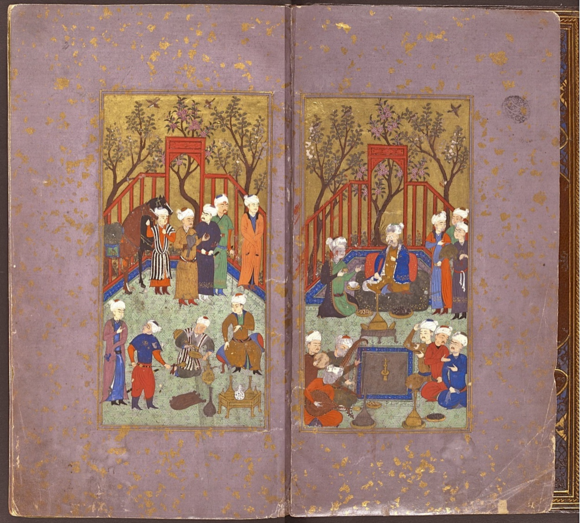 There were several missions exchanged between the Timurids and the Yongle Emperor (r. 1402-24). After Timur's death, the first Chinese embassy to Shahrukh arrived in Herat in 815/1412. A second embassy arrived in Rabiʻ I 820/April 1417 with three hundred horsemen and gifts and presents sent by the Emperor of China consisting of falcons, brocades, velvets, silks, porcelain vessels and Chinese paper, etc. A third embassy reached Herat in Ramadan 822/October 1419 (see Thackston, p.279, citing the Persian sources Mujmal-i faṣīhī by Fasih al-Din Khvafi, and Maṭlaʻ-i saʻdayn  by ʻAbd al-Razzaq Samarqandi). Return missions also took place with the artist Ghiyas al-Din Naqqash, Baysunghur’s representative, keeping a detailed diary of his journey between December 1419 and August 1422 (see Thackston’s translation below).

Chinese paper was much valued by the Timurids and gave rise to a fashion for using coloured dyes and decorating with gold. It was regarded as good to write on. Slightly tinted paper was considered restful to the eye while dark colours suited coloured inks[1]. Add.16561, pictured below, is a collection of poetry by 12 different authors of the 14th and 15th century. It was copied in 1468 in Shirvan in present day Azerbayjan by Sharaf al-Din Husayn, a royal scribe, possibly at the court of the Shirvanshah Farrukh Yasar (1462-1501). The manuscript contains one double-page and seven single miniatures. The paper is highly polished and dyed different shades of pink, mauve and yellow/green, decorated with large flecks of gold. The second of the two manuscripts on display is Add.7759, the Dīvān of Hafiz, copied by Sulayman al-Fushanji in Ramazan 855/October 1451. Although no place is mentioned in the colophon, the name of the scribe may be connected to Fushanj in the province of Herat, Afghanistan, possibly suggesting Herat as a place of origin. The paper is unusually heavy and includes 31 pages decorated with Chinese ornamentation of which seven can be identified as containing designs of bamboos, pomegranates and other plants while twelve show Chinese landscapes and buildings. The paper is coloured various shades of orange, pink, blue, yellow/green, grey and purple. 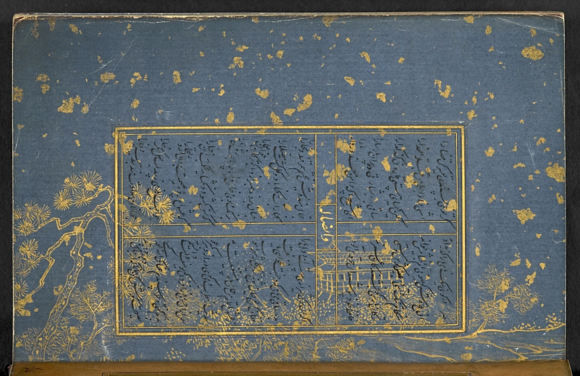 A Chinese palace set against a background of mountains and lakes, with pine trees in the foreground (British Library Add.7759, f. 3r) 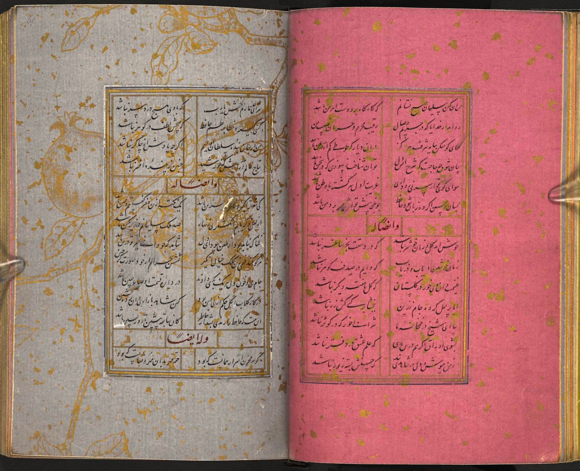 In her study of the New York Public Library Makhzan al-asrār (Spencer Persian 41), dated 25 Jumada I 883/24 August 1478, Priscilla Soucek demonstrated, by reconstructing several examples, that the decorated Chinese paper had originally been in the form of sheets which were painted before being cut up. A further example of the same feature can be seen in folios 17r and 10v below where the outlines of the mountains on the two pages are almost contiguous. As in the New York manuscript, the designs in Add.7759 are at right angles to the text.

Both Add.7759 and Add.16561 have now been fully digitized and will be published on the Library’s Digitised Manuscripts page during the next few months. This will hopefully allow a much needed detailed study to be made of the paper.

Ming: 50 years that changed China is open at the British Museum until 5 January 2015. An illustrated catalogue of the same title by the exhibition curators Craig Clunas and Jessica Harrison-Hall is available from the British Museum shop.

W. M. Thackston, “Report to Mirza Baysunghur on the Timurid Legation to the Ming Court at Peking” in A century of princes: sources on Timurid history and art. Cambridge, Mass, 1989, pp. 279-97

N. Titley, Persian Miniature Painting and Its Influence on the Art of Turkey and India: The British Library Collections. London, 1984, pp. 240-41

Posted by Ursula Sims-Williams at 3:05 AM