A royal Malay letter from Ternate

In 1579 Francis Drake sailed into Ternate harbour during his circumnavigation of the globe. This was the first official visit by an Englishman to the islands of what is now Indonesia.  The visit appears to have been a diplomatic success, and Drake brought back a letter to Queen Elizabeth and a gold ring.  However the follow-up was less than satisfactory from the Ternate point of view, for it was not until 1605 that the next English ships arrived in Ternate, captained by Henry Middleton. Middleton carried back to London a letter to James I from Sultan Said Syah (held today in the National Archives, SP 102/4/24) in which the sultan noted acerbically that in the over twenty years that had passed since Drake’s visit, he had sired eleven children, without receiving any further overtures of friendship from England  (dalam kerajaan itu sebellas anak beta, itu pun tiada jua sesuatu khabar Inggliterra hendak berkasih-kasihan Ingglitera dengan orang Maluku). Hardly surprisingly, the sultan refused the English permission to trade in Ternate, citing his alliance with the Dutch (Gallop 2003: 413-418). 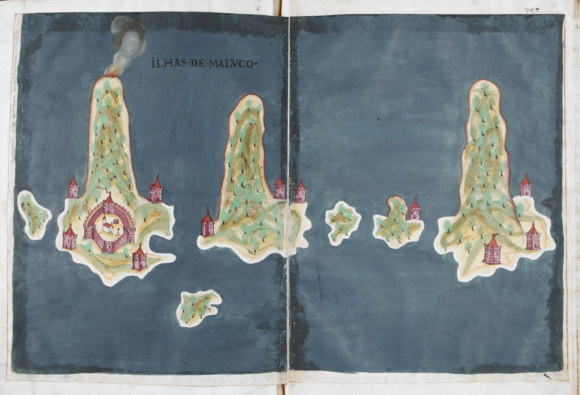 Ilhas de Maluco, 'The islands of the Moluccas', showing from left to right the islands of Hiri, Ternate, Maitara, Tidore, Mare and Makian, with an interesting treatment of perspective which emphasises the height of the volcanoes which rise from the sea to form each of the islands. Livro do Estado da India Oriental, by Pedro Barreto de Resende, 1646. British Library, Sloane MS 197, ff.395v-396r.

Despite such ups and down, over the next three centuries diplomatic channels of communication between Ternate and Britain remained open, as reflected in an occasional series of royal letters preserved in various repositories.  Presented here is a newly-digitised letter in Malay from Sultan Kaicil Patra Muhammad Yasin of Ternate (r.1801-1807) to the British Commissioner in Ambon in the central Moluccas, dated 26 Zulhijah 1216 (19 April 1802) (Add.18141, f.2r).  At that time the Commissioner was Col. J. Oliver, but the letter may have been intended for his predecessor, Sir Robert Townsend Farquhar (1776-1830) - British commercial Resident of Ambon from the late 1790s until 1801 and subsequently Lieutenant-Governor of Penang from 1804-1805 and first Governor of Mauritius from 1810 to 1823 - for the letter was presented to the British Museum in 1850 by his son, Sir Walter Minto Farquhar (who had evidently been named after the oldest son of Lord Minto, Governor-General of India).  In this letter, the Sultan informs the Commissioner that a joint British-Ternatan force had been despatched to Halmahera to settle a disturbance in Sawu provoked by the kingdom of Jailolo (kuku Jailolo dengan manisnya membujuk negeri Sawu, maka berdiri sama2 menunjuk berani, ‘sweet-talking Jailolo has managed to dig its nails into Sawu, and now they’re both acting up’). 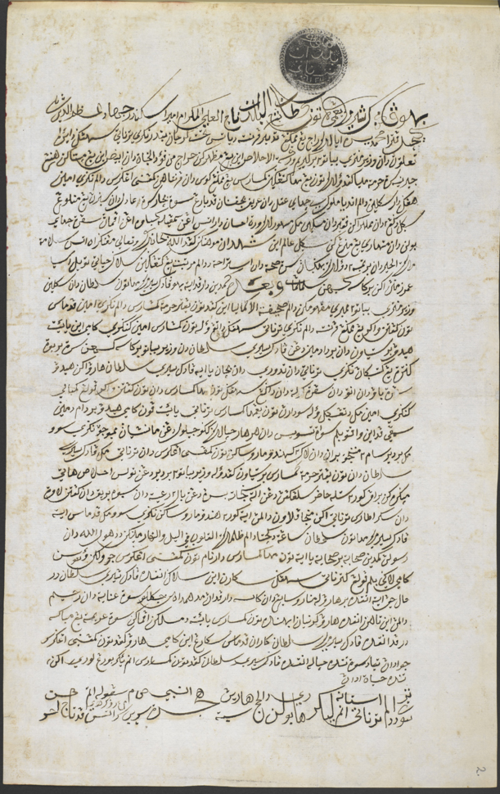 Letter in Malay from Sultan Muhammad Yasin of Ternate to the British Commissioner in Ambon, 1802. British Library, Add. 18141, f.2r.

The letter is written in superb calligraphy, confident and stylish, by a master of the craft who makes good use of the thick and thin edges of the nib of the pen, as particularly evident in the first line, a detail of which is shown below.  The hand in this letter shares some characteristics with other royal letters from the Moluccas, in particular the sweeping, cursive style of writing which greatly exaggerates the tails of letters. One of the most characteristic letter forms is ya or medial or final ha (see the word maha below), both of which are usually written as two convex arcs joined at the lower tip, like an elongated curved v tipped towards the right, while also notable is the pyramidal (or mountain-like?) presentation of the sultan’s name in the first line shown here.

Detail of part of the first line of the letter, reading 'Wherefore His Majesty the Sultan of Ternate ...' (Bahwa  paduka  seri  maha  yang  tuan sultan  Ternate al-buldan taj ...).  The scribe has taken a very cavalier and almost playful approach to certain letters, such as the dal (d) of paduka, and the convoluted tail of nga in the word yang.

The full Malay text of the letter shown here can be read in the catalogue entry for Add.18141, f.2r.