Throughout island Southeast Asia, the hot and humid tropical climate with attendant rodent and insect life is usually judged hostile to the preservation of manuscripts. And yet in certain highland communities in the province of Jambi in east Sumatra, manuscripts can and do survive for centuries, as reflected in a recent Endangered Archives project, EAP117, Digitising ‘sacred heirlooms’ in private collections in Kerinci, Sumatra, Indonesia.

Buffalo horn manuscript inscribed with the story of the journey of Uti Unduk Pinang Masak and Dayang Berani, written in the Kerinci incung script, in the collection of Depati Singolago Tuo (the text is transliterated in Tambo Kerinci no.37). British Library, EAP117/2/1

In many villages in the interior of Jambi, manuscripts in Malay on paper, horn and bamboo, written in Arabic or the Indic incung script, have been preserved as sacred village heirlooms along with other auspicious objects such as weapons, coins, pieces of porcelain and elephant teeth. Usually carefully stored in a wooden box in the loft of the house of the village headman, these precious items could only be brought out on occasional ritual feasts to celebrate the origins of the village (Watson 2009).  In retrospect, it can be seen that the combination of secure storage of these manuscripts at the top of the house, where smoke from the kitchen below would act both as an insect repellent and as a natural dehumidifier, together with very occasional ‘airings’, was an extremely effective form of preservation.  In one spectacular case, a code of laws from the village of Tanjung Tanah written on treebark paper has been carbon-dated to the 14th century, making it the oldest known surviving Malay manuscript in the world (Kozok 2006). 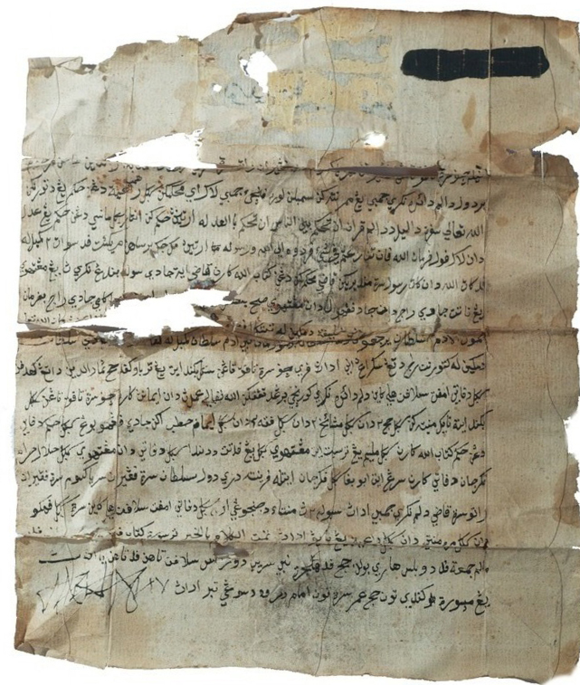 Heirloom edict from Jambi dated 1794. When it was seen by P. Voorhoeve in 1941 and transliterated in Tambo Kerinci (no.43), the first line could still be read (Inilah cap serta tapak tangan Pangeran (Suria) Kesuma dan Pangeran Ratu serta Raja Sultan Ahmad Badruddin ... marhum). By the time the document was photographed in 2008 for the Endangered Archives Programme, it had been slightly damaged. British Library, EAP117/2/1/7.

In early 1941 a survey of village heirlooms of Kerinci was carried out by Petrus Voorhoeve, a Dutch language officer working for the colonial administration.  Voorhoeve and his team documented and photographed some 260 manuscripts, and then produced the 'Tambo Kerintji', an unpublished volume containing transliterations of all the texts into latin script. During the Japanese occupation of Indonesia, Voorhoeve was imprisoned and sent to work on the Burma railway.  At the end of the war, all his notes were feared lost – until 1973, when C.W. Watson discovered in Kerinci one surviving copy of ‘Tambo Kerintji’, and arranged for this to be retyped and distributed to a few libraries. And in 2006, Uli Kozok uploaded the Tambo Kerinci on to the website of the University of Hawaii, where it can now be freely consulted.

Kozok returned to Kerinci in 2007 with an Endangered Archives grant to document the sacred heirlooms of 65 villages, including some of the very items seen by Voorhoeve in 1941; the results can be consulted online here. In addition to locally-produced manuscripts, there are copies of the Qur’an and songs in praise of the Prophet (the well-known Mawlid Barzanji) printed in Bombay in the second half of the 19th century, and colourful maps of the holy cities of Mecca and Medina, evidently brought back to central Sumatra after the hajj pilgrimage.

Map of Mecca and Medina, probably brought back to Kerinci by a pilgrim returning from the hajj, in the collection of Mangku Suka Rame.  British Library, EAP117/11/1/4

A selection of copies of the Qur’an, printed in Bomby in the 19th century, in the collection of Mesjid Keramat, Kerinci. British Library, EAP117/22/1/8. 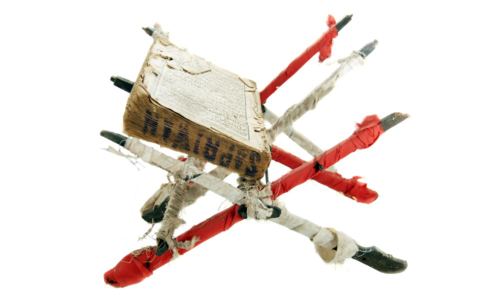 Liha or rehal, stand for a copy of the Qur’an, from the collection of Mangku Rajo Perang. British Library, EAP117/46/2/23

Among the most historically significant manuscripts documented in these heirloom collections are royal edicts issued by the sultan and nobles of Jambi, to local leaders (dipati) upstream. For centuries, valuable products from the highlands such as gold, ivory and resin were brought downstream to the coastal regions for trade.  The economic and political relationship between the lowland court of the sultan of Jambi and the peoples of the highlands was formalised and cemented through the issuing of royal edicts (piagam) in Malay.  In these edicts, the sultan or his nobles would grant an honorific title and jurisdiction over a certain territory to highland leaders, who in return would be bound to uphold the law and respect the royal prerogative to certain types of forest produce. 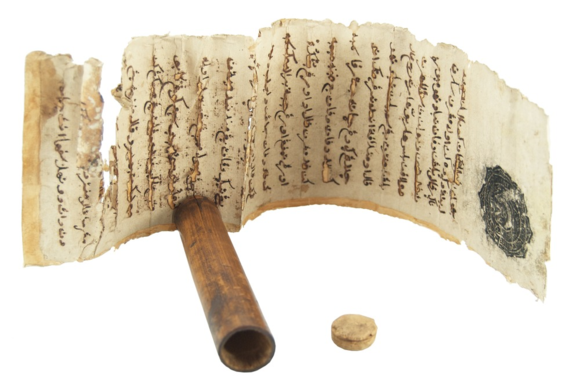 Some royal piagam contain detailed descriptions of the territory awarded to certain village leaders, and it is the boundary lists in these centuries-old documents that have ensured their contemporary relevance, particularly with the increasing threat of encroachment by commercial interests. While I was researching a group of 17th-century royal edicts found in Serampas, south of Kerinci, I was very interested to find out that in 2006, KKI Warsi - an Indonesian NGO promoting community-based forest management - had made use of an heirloom edict dated 1756 to support the village of Guguk in neighbouring Merangin in its successful struggle to manage its own ancestral lands. 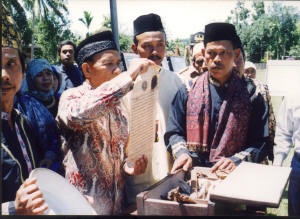 And so on a recent visit to Indonesia, I was delighted to be invited by the journal of Jambi studies, Seloko, to deliver a workshop on manuscripts, to be co-hosted by KKI Warsi.  The workshop was held in Jambi from 15-16 September and was attended by about 15 participants from KKI Warsi and educational establishments in Jambi. While covering the basics of philology (the study of the content of manuscripts) and codicology (the study of their outer form), and the 'social lives' of manuscripts, we focussed on royal edicts from Jambi, and in particular, the perceptible increase in importance of boundary lists in these piagam over time. 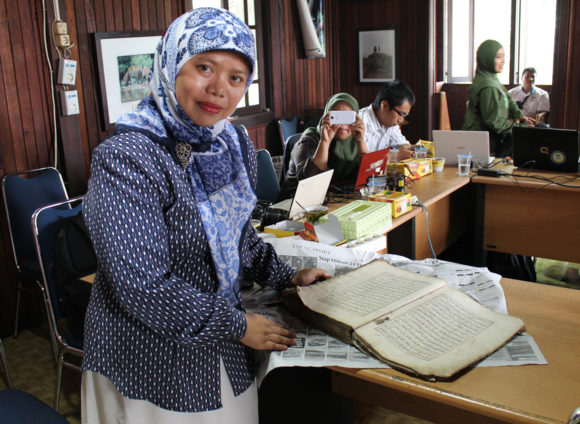 At the manuscripts workshop held on 15-16 September 2014, Mrs Zarfina Yenty, a lecturer at IAIN Sultan Thaha Saifuddin Jambi, brought in a Qur'an manuscript inherited from her grandfather in Kerinci.  Copied on European paper and probably dating from the late 18th or early 19th century, despite lacking beginning and end, it is a fine example of penmanship.

P. Voorhoeve, ‘Kerintji documents’, Bijdragen tot de Taal-, Land- en Volkenkunde, 1970, 126 (4): 369-99. [Before the re-discovery of the 'Tambo Kerintji' in 1973, Voorhoeve published an article drawing on his memory and surviving notes to reconstruct his expedition to Kerinci in 1941.]

Posted by Annabel Gallop at 2:13 AM