The BP exhibition Ming: 50 years that changed China is open at the British Museum until 5 January 2015. During the years 1400-1450 the Chinese empire reached a peak in its own cultural and artistic productions and in its trade and exchange with other cultures. The stunning exhibition at the British Museum vividly represents the first-class  products of those years, with 280 extraordinary works from the Museum collections and from many other institutions.

Among the most interesting pieces from the British Library collections which are now on display, we find 3 volumes of the Yongle Encyclopaedia (永樂大典 Yongle Dadian), which takes its name from the Ming Emperor who commissioned it. 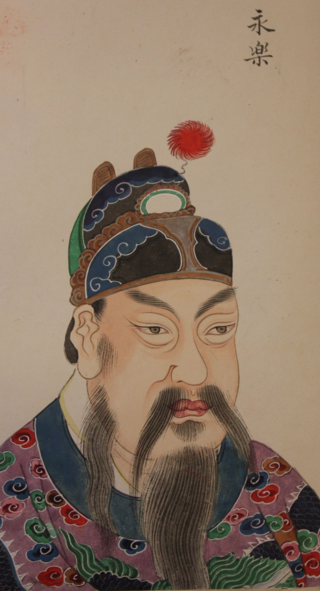 Emperor Yongle (born with the name of Zhu Di 朱棣) was the third Emperor of the Ming dynasty and he reigned from 1402 to 1424. He was a key figure of the development of the Chinese empire: he transferred the capital of the empire from Nanjing to Beijing and ordered the building of the Forbidden City. Under his reign Admiral Zheng He travelled to the Middle East and East Africa strengthening the trade and diplomatic links with foreign countries. Indeed the importance of China as a production centre for the export of high quality goods during the first half of the 15th century is testified by some exquisite British Library Persian manuscripts, written on Chinese decorated paper, now on display in the exhibition.

Emperor Yongle commissioned the Yongle Dadian in July 1403 and the project involved 2169 scholars and compilers from the Hanlin Academy and the National University. Completed in 1408, it was the world’s largest literary compilation, comprising 22,877 chapters bound in 11,095 volumes. The Yongle Dadian was taken as an example and frequently quoted in the Qing dynasty encyclopaedia Siku quanshu (四庫禁書 “Complete Library of the Four Treasuries”), a colossal compilation in 36,275 volumes commissioned in 1773 by Emperor Qianlong.

The size, the type of paper, and the binding of the volumes are different from the other Chinese encyclopaedias. The paper is heavy with dark red vertical rulings. The subject headings are written in red on the outer edges of the pages. The binding is in the “wrapped-back” style (包背裝 bao bei zhuang), but with a distinctive yellow silk hard-cover to protect the paper. 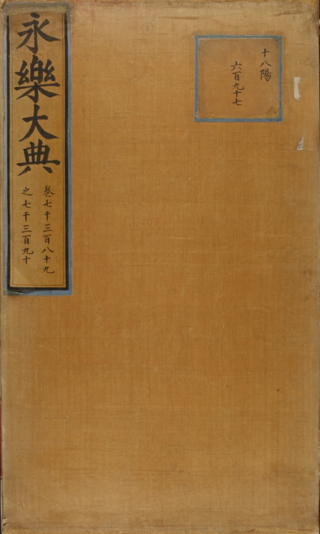 Distinctive yellow hard cover from the volume containing chapters 7389 and 7390 of the Yongle Dadian (Jiajing to Longqing period, 1562-7) (British Library Or.11758)

The Yongle Dadian is unique not only for its physical appearance but also for its content arrangement: unlike other Chinese compilations, the parts are not ordered by subject, but by the rhythm system of the dictionary 洪武正韻 (Hongwu zhengyun). This system is closer to the idea of an alphabetical arrangement, and in this way it was easier to find a specific entry. 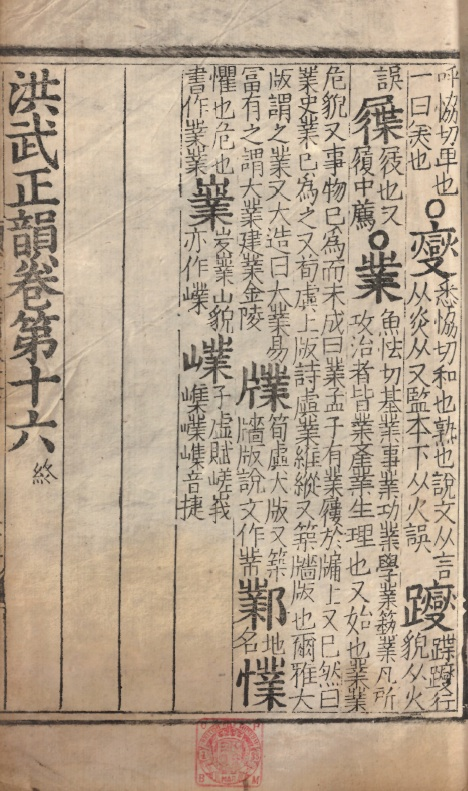 A page from the woodblock printed dictionary 洪武正韻 (Hongwu zhengyun) which is named after Hongwu (r. 1368-1398), the first emperor of the Ming dynasty who commissioned this work in 1375. 16th century copy (British Library 15342.b.14)

The content of the encyclopaedia covers all aspects of traditional “Confucian” knowledge and contains the most representative literature available at that time, ranging from history and drama to farming techniques. It comprises large sections of historical documents and other sources, transcribed character for character, with the name of the author or the source in red.
In fact, the term encyclopaedia, which is commonly used when referring to the Yongle Dadian, is slightly misleading since 大典 (da dian) means grand “canon” or “code” and the Yongle Dadian should be regarded rather as the Chinese literary genre of 類書 (lei shu), which literally means “classified writings”. These literary compilations span a wide variety of texts, such as dictionaries, reference books, manuals and anthologies. Unlike Western encyclopaedias which are based on edited entries, the Yongle Dadian is a collection of readings and excerpts from existing literature. Despite the non-originality (as we understand the term now) of these types of work, the value of the Yongle Dadian is enormous as it preserves many texts which otherwise would have been lost. 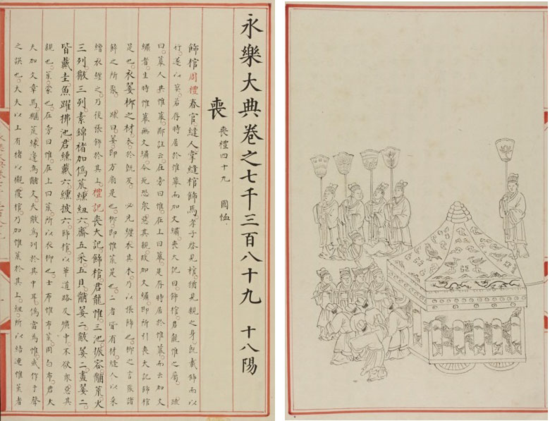 Even though printing techniques were already well developed in the Ming dynasty (the earliest dated woodblock-printed item, the Diamond Sutra, dates back to the 9th century), the Yongle Dadian was handwritten because of its length and extent. The only 1408 manuscript was almost destroyed by fire during the sixteenth century, and as a result two other copies were produced during the reigns of Jiajing 嘉靖 (1522-1566) and Longqing 隆慶 (1567-1572). This was not enough to keep the precious manuscripts safe: during the fall of the Ming dynasty and the rise of the Qing in 1644, the 1408 copy was destroyed and some of the later ones were lost or dispersed. The 1562-7 copies were at that time the earliest edition to survive and the number of volumes went down to 800. During the Boxer Uprising in Beijing during the spring of 1900, half of the remaining volumes which were stored in the Hanlin Academy were destroyed and now less than 400 juan (chapters) remain. They represent only the 3% of the total initial corpus. 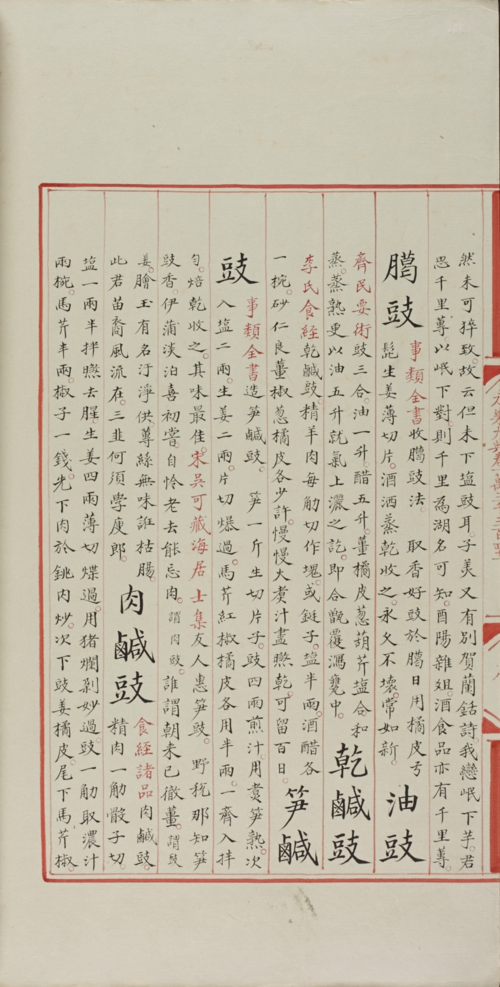 David Helliwell, Curator of Chinese Collections at the Bodleian Library in Oxford, has worked extensively on the Yongle Dadian volumes held in the European libraries (see Helliwell below), tracing their arrival from Beijing and identifying in 1997 a new volume in the University of Aberdeen Library [1]. Today there are about 56 volumes in Europe (51 in the United Kingdom and the remaining 5 in Berlin). The British Library currently holds 24 volumes of the Yongle Dadian, corresponding to 49 chapters. During the 1930s the National Library of China made copies of some chapters and donated them to the British Museum Library. Furthermore, in 1960, the Chinese publisher 中華書局 Zhonghua Shuju produced facsimiles of all the existing volumes. 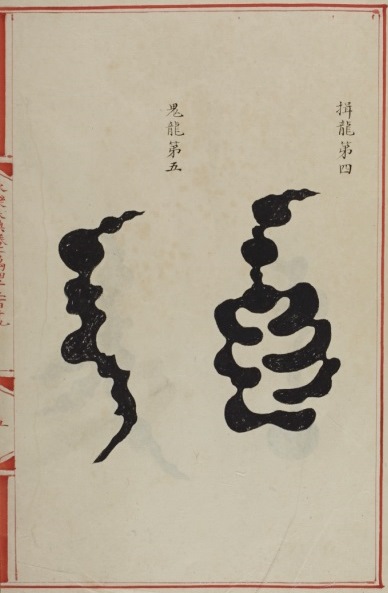 [1] Helliwell, David, “The Aberdeen volume of Yongle Dadian”, lecture given to the University of Aberdeen Chinese Studies Group, 16 March 2009.