The British Library Qatar Foundation Partnership has launched the Qatar Digital Library, a new bilingual, online portal providing access to previously undigitised British Library materials on two major themes: Gulf history, and the history of the sciences in the Arabic-speaking world. The portal hosts content ranging from archives, maps and manuscripts to sound recordings, photographs and much more. All of the content will be complemented with explanatory essays in both Arabic and English. 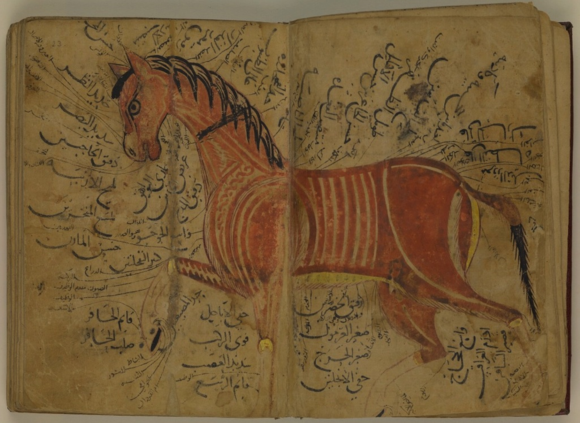 An early 13th century illustration of the horse’s good points from Kitāb al-bayṭarah by Aḥmad ibn ‘Atīq al-Azdī (Or 1523, ff.22v-23r)

Our rationale in the selection below was to digitise important seminal texts and authors within a continuous narrative that spans from the late 8th century to the 19th century and from Islamic Spain to the Indian subcontinent. To provide the groundwork for the scientific advancements made within the Islamic world, we have digitised representative manuscripts containing all the Arabic translations of Greek scientific texts. For particularly important texts, like the Almagest of Ptolemy (Add MS 7474 and Add MS 7475), we have digitised all our copies.

Beyond these early translations, we have digitised scientific treatises that reflect scholarly activity down to the 17th century, such as astronomical texts by Bahāʼ al-Dīn al-ʻĀmilī. We have also digitised scholars’ notebooks, which offer a glimpse into the research interests of individual Arabic-speaking scholars, while providing a snapshot of the texts they found most interesting or useful (see for example this notebook on physics and mathematics Add MS 23570, and this one on alchemy and chemistry Or 13006).

Other scientific manuscripts were chosen for digitisation not just because the texts they contain are so significant within the history of science, but because the manuscripts themselves are objects of beauty and masterpieces of Islamic book arts. The British Library collections boast such treasures as ʻAbd al-Raḥmān al-Ṣūfī’s Book of Constellations (Or 5323) and an Arabic translation of Dioscorides’ Materia Medica (Or 3366).

To help contextualise these manuscripts, short essays are also available on the portal. You can find articles (and even videos) on such diverse topics as early translations into Arabic, ‘Islamic’ bookmaking techniques, wonders of engineering, and manuscript collectors.

Below you will find a list of the first 40 manuscripts. Over the coming weeks we will be adding more fascinating manuscripts and treasures. Please keep an eye on the Qatar Digital Library. 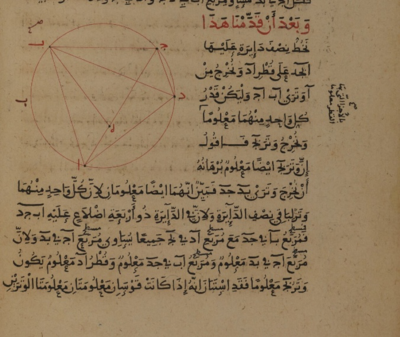 Astronomical diagram from the Almagest of Ptolemy (Add MS 7474, f.11v) 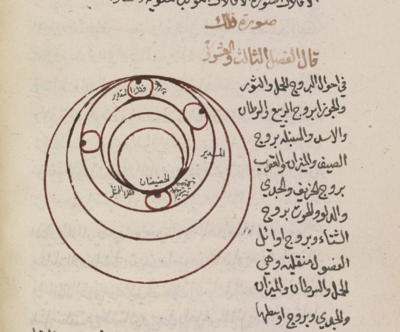 Add MS 9602: Ibn al-Naṭṭāḥ and Ibn al-Samḥ, two technical treatises on the use of the flat northern astrolabe. 14th century. 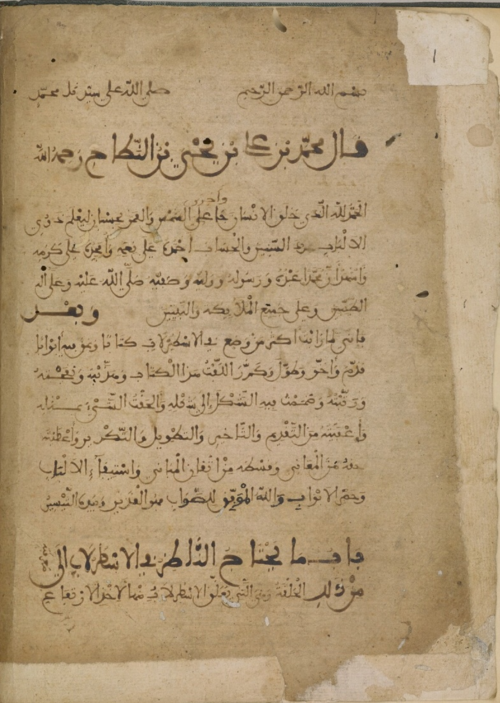 Beginning of a treatise on the use of the astrolabe by Muḥammad ibn ‘Alī ibn Yaḥyá ibn al-Naṭṭāḥ (Add MS 9602, f. 1v) 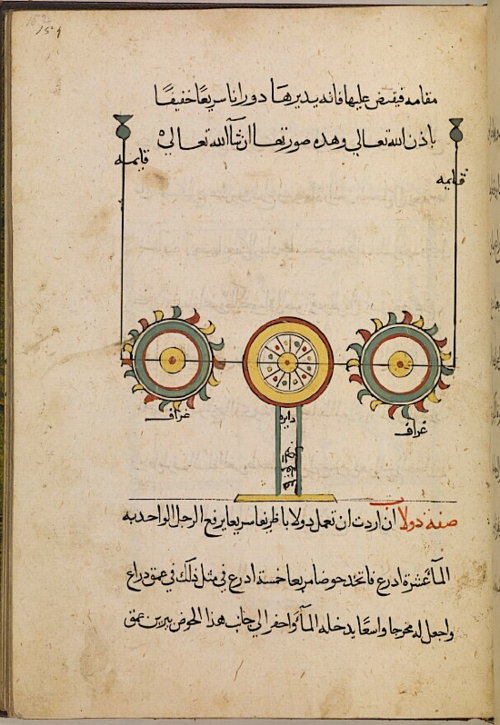 Diagram of a mechanical device from a manual on the military arts supposedly discovered in the tomb of Alexander the Great at Alexandria and translated from Greek into Arabic. 16th-17th century (Add MS 14055, f.152r) 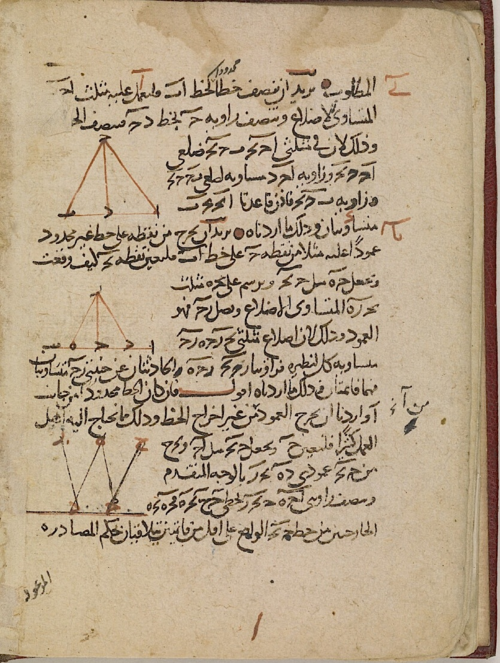 Add MS 23391 : Kitāb Arshimīdas fī al-binkāmāt, on the hydraulic and pneumatic machinery of water-clocks with thirteen diagrams, attributed to Archimedes and Ṣan‘at al-zāmir, on the design and construction of a hydraulic flute playing machine attributed to Apollonius the carpenter and geometer. 16th century. 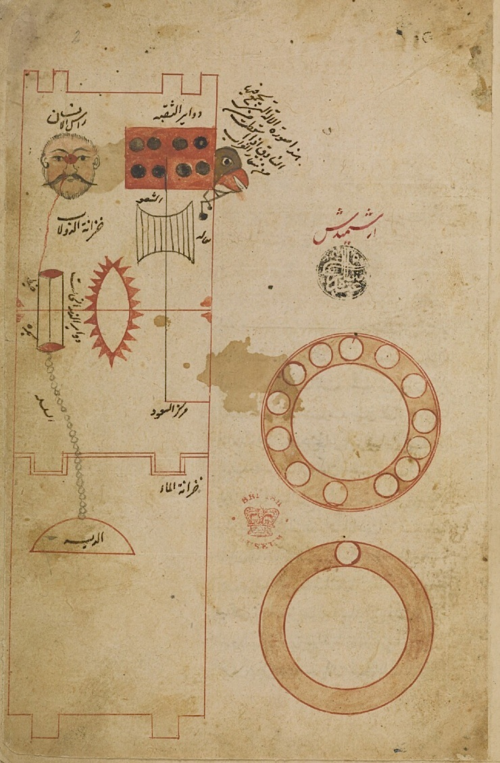 Top section of water-clock, showing a man's head whose eyes change colour on the hour a bird's head that drops balls onto a cymbal, and the mechanisms that drive these devices (Add MS 23391, f2r) 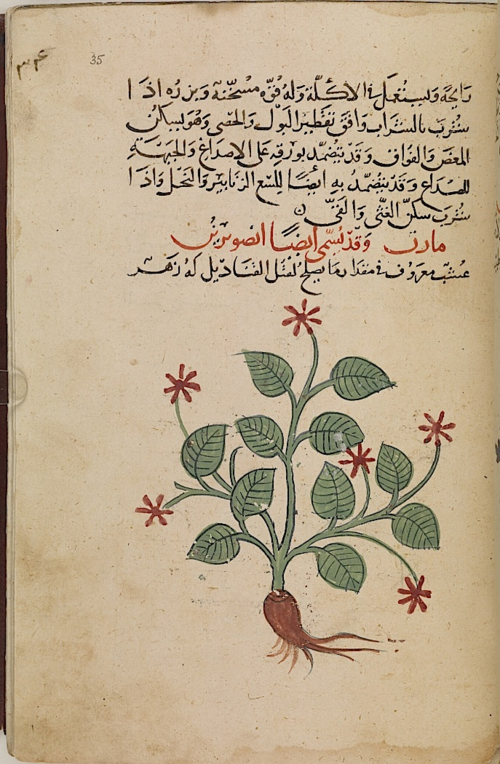 Or 5323: al-Ṣūfī, Kitāb ṣuwar al-kawākib al-thābitah, an illustrated description of the 48 classical constellations discussed by Ptolemy in his Almagest. Dated, possibly at Maragha, between 1260 and 1279/80. 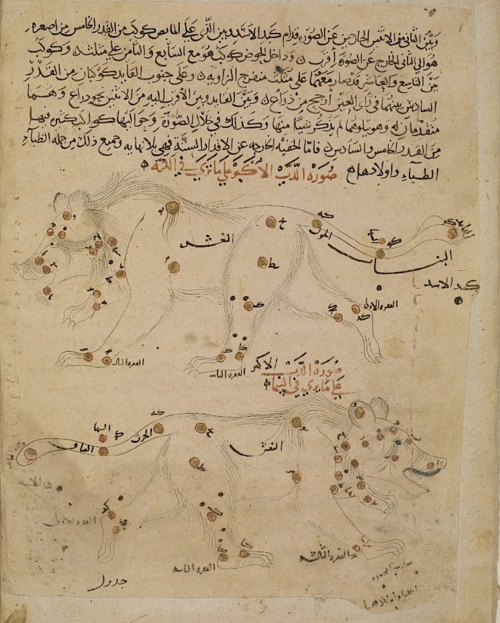 Or 5593: al-Bīrūni, Kitāb istī‘āb al-wujūh al-mumkinah fī ṣan‘at al-asṭurlāb, One of only three recorded copies of an influential treatise on the construction and use of astrolabes, containing 122 diagrams. 14th century. 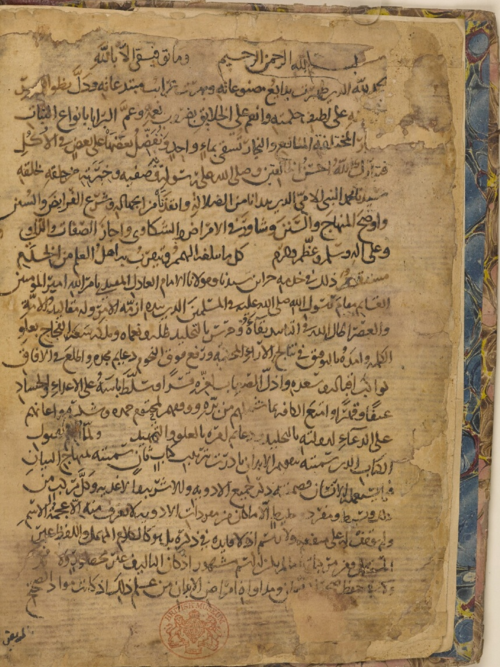 Or 9202: Ḥunayn ibn Isḥāq, Alexandrian Summaries of three medical treatises by Galen, the second volume of a set of the treatises of the Greco-Roman physician Galen of Pergamon. 12th century.

Or 9587: Ibn al-Raqqām, two treatises on the construction and use of sundials. Dating from before 1315.

Or 9649: Mūrisṭus, three technical treatises on the construction of musical organs. 19th century.

Or 11209: Naṣīr al-Dīn al-Ṭūsī, Kitāb al-tadhkirah fī al-hay’ah, a treatise on astronomy which summarises, rationalises and improves upon the system presented in the Almagest of Ptolemy. Copied at Ḥamāh, 11 Shawwāl 688 (28 October 1289).

Or 13006: Compendium of alchemical treatises in Arabic, Persian and Ottoman. 16th and 18th centuries.

Posted by Ursula Sims-Williams at 6:34 PM