In 1779, the ruler of Persia and founder of the Zand dynasty, Karim Khan Zand, died of natural causes without nominating a successor. Karim Khan had ruled Persia for the previous 30 years and his failure to appoint an heir created a dangerous power vacuum in the country. A number of rivals from within his own family quickly emerged. The most prominent contenders initially were Karim Khan’s half-brother Zaki Khan Zand (Zackey Caun) and his brother Sadiq Khan Zand (Sadoo Caun or Sadoo Khan). 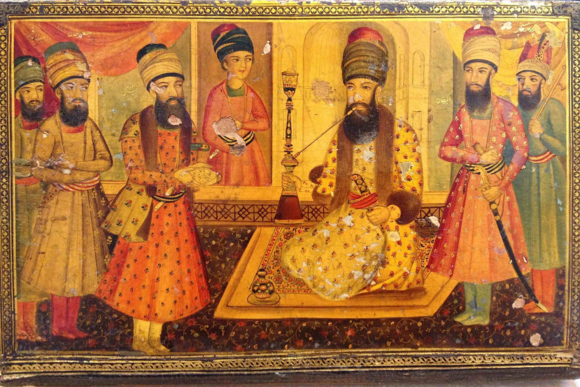 An early 19th century lacquer binding  showing Sadiq Khan surrounded by his family and courtiers. Jafar Khan is the second from the left (see Some Portraits of the Zand rulers of Iran). Add.24904

Zaki Khan and Sadiq Khan
Zaki Khan was a powerful and ruthless warrior who – as a general in the service of Karim Khan – had brutally suppressed Qajar tribal territories in the north of Persia in 1763-64. He had even attempted to form a personal fiefdom in central and southern Iran. Although he was the head of a faction that claimed to support the ascension of one of Karim Khan’s infant sons, Muhammad Ali Khan Zand (who was married to Zaki Khan’s daughter), it was clear that he harboured his own ambitions for power.

Sadiq Khan was another  prominent member of the Zand ruling elite and had led the Persian attack on Ottoman-controlled Basra in 1775-6. He was part of a faction that stood in opposition to Zaki Khan and supported another of Karim Khan’s infant sons, Abul Fath Khan Zand, to succeed his father.

Both of these rivals had military experience, armed followers and a desire to replace Karim Khan as ruler of Persia. Serious tension swiftly developed between them and the prospect of a major confrontation between their forces loomed.

The British Get Word of the Death of Zaki Khan
As John Beaumont, the East India Company’s (EIC) Political Resident in Bushire, observed in a letter dated 11 May 1779, this tension would not end ‘but with the death of one of them’. 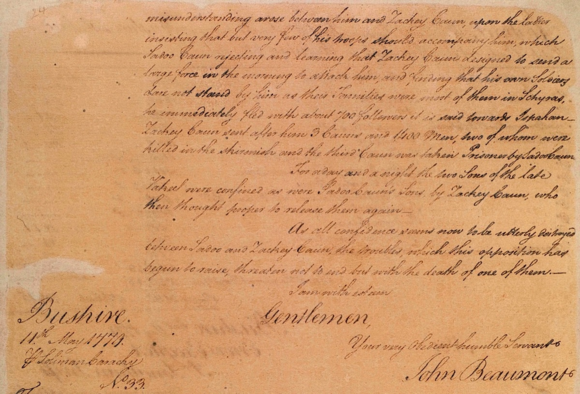 Beaumont’s observation proved to be prescient as not long after he received news from Shiraz (referred to in the letter as Schyras) that Zaki Khan had been killed at the hands of his own men.

In a letter dated 23 June 1779 he described the event in detail to William Hornby, the Governor of the EIC’s Council in Bombay. Beaumont states that it has ‘pleased the almighty to save Persia and rid the world of such a cruel monster’. The letter describes in gruesome detail how, after Zaki Khan had ordered a massacre of villagers while on the move with his army, his generals were so outraged at his actions (and concerned for their own lives) that they conspired to kill him.

[the conspirators] proceeded to Zackey Caun’s tent who was at prayers, he asked them what they wanted, they boldly replied they came to take his life, upon which he snatched up a blunderbuss he always kept by him ready loaded with 5 or 6 balls, but before he could use it, Jaffer Caun cut off his right arm. Nasirulla Mirza observing that was not the proper way to use a sword, drew his and cut him right down the middle. His head was then cut off and immediately despatched to Sadiq Khan before his body was burnt.

Concluding his letter, Beaumont stated that

...as soon as Sadoo Cahn returns to Schyras  the Persians have not a doubt but peace will be restored everywhere and affairs conducted quietly again in their usual channel. 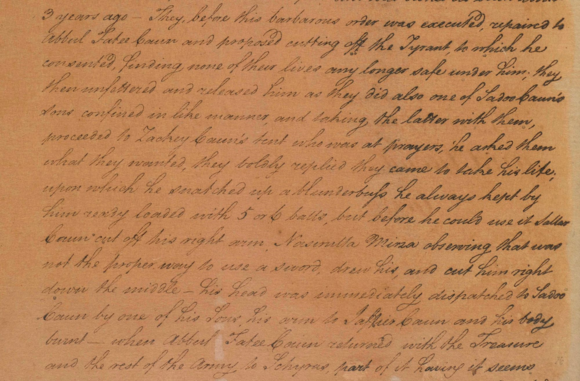 Beaumont Hopes for Renewed Stability
Five months after Zaki Khan’s death, Sadiq Khan appeared to be in the ascendancy and in a letter from 20 November 1779 Beaumont was able to report that ‘Sadoo Khan maintains his power at Schyras and seems at present to be firmly established in power’.

He was keen for political stability to be restored in the country so that the EIC could resume its activity in the silks and woollens trade. Unfortunately, Beaumont was to be disappointed and despite his optimistic interpretation of events, Zaki Khan’s brutal killing turned out to be the first of many others.

Rather than marking the start of a new period of calm under the rule of Sadiq Khan, it instead marked the beginning of a long and brutal internecine struggle from which the Zand Dynasty never recovered. Despite his dominant position in 1779, two years later, Beaumont learnt that Sadiq Khan had been defeated by another rival for power, Ali Murad Khan (here referred to as Ally Morad Khan), and blinded and that ‘in a fit of despair on the loss of his sight’ he had poisoned himself with opium and subsequently died. 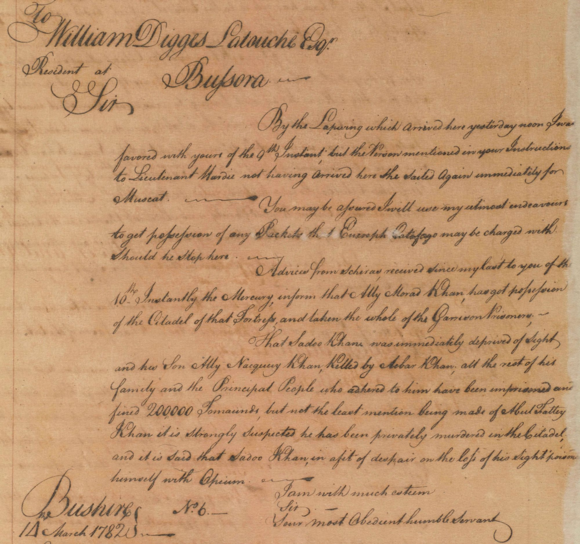 Further Deaths and the Rise of the Qajars
Ali Murad Khan ruled from 1781 until 1785 when he, in turn, was defeated and killed by Sadiq Khan’s son, Jafar Khan. Throughout the 1780s and early 1790s, the Qajar tribe in the north of Persia grew in power and began to threaten the Zand dynasty’s rule, a rule that had come to be characterised by weakness and destructive internal conflicts.

By 1794, the Qajars were dominant and Lutf Ali Khan, son of Jafar Khan and the last Zand ruler of Persia was defeated and killed by Muhammad Khan Qajar, the Chief of the Qajar tribe. This event marked the beginning of the Qajar Dynasty’s rule over Persia, a period of domination that was to last until 1925. 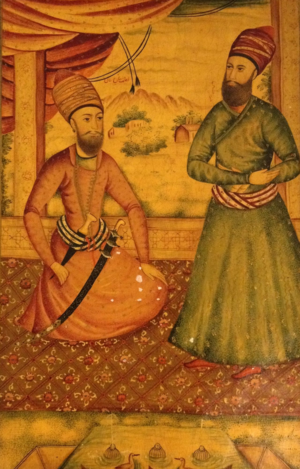 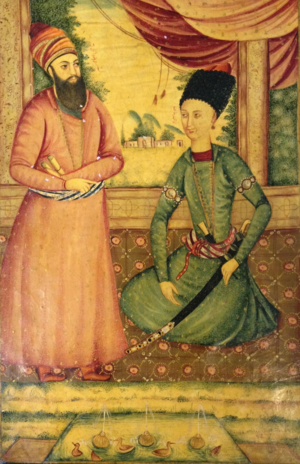 Inside front and back of an early 19th century lacquer binding showing Lutf Ali Khan Zand (far left) with his minister Mirza Husayn, and Agha Muhammad Khan Qajar (far right) with Haji Ibrahim, the Governor of Shiraz who turned against Lutf Ali Khan ultimately bringing about his downfall. Add.24903