Christmas and New Year in the Persian Gulf: Protocol and Ceremony

In the British administered Persian Gulf, the festive period was a time of celebration for colonial officers and their families, yet it still required the imperial protocol and ceremony that helped to solidify hierarchies of power.

On Christmas and New Year's Day, as on the two major Islamic festivals and the monarch’s birthday, local rulers and notables paid personal calls to colonial officers, and the Residency or Agency building’s flagstaff was ceremonially dressed and decorated. Archival files dealing with general etiquette and procedures observed for the Muslim holidays of Eid al-Fitr and Eid al-Adha contain interesting details about how Christmas and New Year were observed in the Persian Gulf. 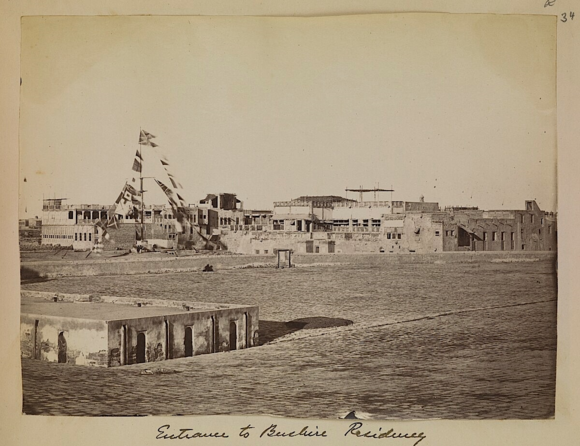 Christmas Greetings from the Persian Gulf
Throughout the first half of the twentieth century, the Political Agent at Bahrain would receive personal visits from the ruling Al Khalifah sheikhs of Bahrain and local merchants on Christmas and New Year’s Day.

However, calls in person were not possible for the sheikhs of the Trucial Coast (modern-day United Arab Emirates) and Qatar with whom the Political Agent also corresponded, either personally or through a native agent. Therefore, letters and greetings cards were sent instead. Shown here are a few examples sent from Sheikh Sultan bin Saqr Al Qasimi, ruler of Sharjah between 1924-1951. 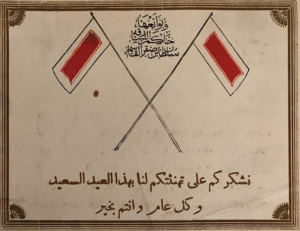 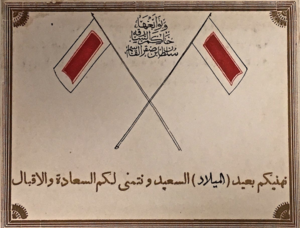 With a letter, dated 21 Shawwal 1356 [24 December 1937], offering belated thanks for the Political Agent’s Eid al-Fitr greetings, the Sheikh sent two cards. The first card offers thanks to the Political Agent for his Eid greetings [nashkurukum ‘alá tahni’atikum lanā bihādhā al-‘īd al-sa‘īd] while the second card wishes him a Happy Christmas [‘īd al-milād al-sa‘īd].

Another letter in Arabic, dated 11 Shawwal 1355 [25 December 1936] to the Political Agent contains the following: ‘On the occasion of Christmas [ḥulūl al-‘īd al-masīḥī] I offer you my heartfelt greetings praying to God to give you a long life full of prosperity’. 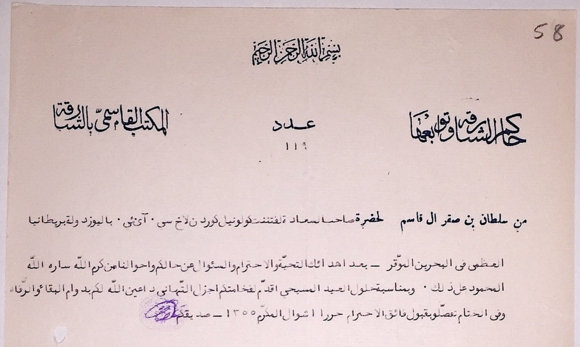 As well as sending his greetings to the Political Agent at Bahrain, Sheikh Sultan bin Saqr would also write to the Political Resident at Bushire, for example his letter of 5 Dhu al-Hijjah 1360 [29 December 1942] wishing him a merry Christmas and hoping that he should ‘enjoy good health and prosperity [kamāl al-ṣiḥḥah wa al-rafāh]’. The Political Resident responded with a letter dated 18 January 1943: ‘I thank you for your wishes for Christmas [‘īd milād sayyidinā al-masīḥ], and hope that you will enjoy good health and prosperity’.

It was also common for Political Agents to receive Christmas greetings from local merchants and notables as well as rulers. An example from Yusuf bin Ahmad Kanoo appears on headed stationary decorated with a star and crescent moon over a palm tree. The Political Agent responded with a quick line to thank him for his ‘kind note of greetings for Christmas and New Year’, and for a delivery of  ‘delicious fruit’ that was sent to mark the occasion. 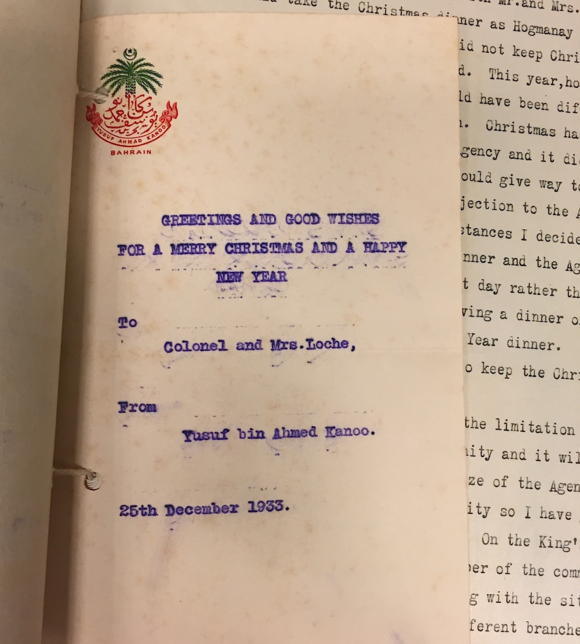 A further example is a letter, dated 24 December 1936, received from a prominent Qatari merchant, Salih bin Sulayman al-Man‘i: ‘On the occasion of Christmas [‘īd al-krismas], I write to offer you my heartiest congratulations and pray God to let you have many returns of the day in good health and full happiness’. 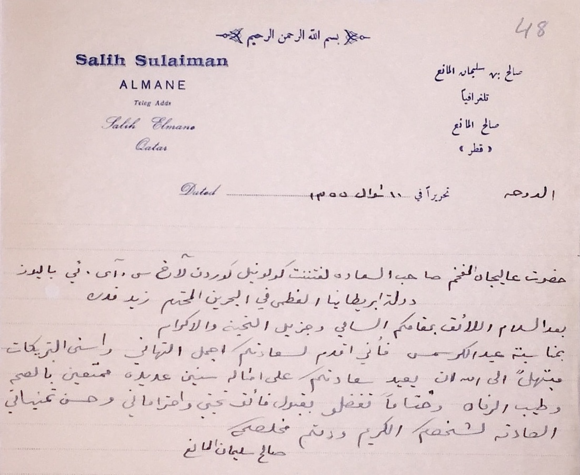 Expats and Missionaries
Protestant missionaries of the Dutch Reformed Church in America, known interchangeably as the American or Arabian Mission, were active in the Persian Gulf from the turn of the twentieth century. As well as their (not very successful) proselytizing to the indigenous population, they provided a religious framework for expats and the British colonial establishment residing in the region.

On 23 December 1936, Reverend Gerrit Van Peurseum, a missionary stationed at Bahrain, invited the Political Agent and his wife to a ‘Divine Service’ on Christmas Day at the American Mission. The Political Agent took part in the service by undertaking to read Biblical passages, which included Isaiah 9:2-8 and 11:1-10, and Luke 2:1-22. 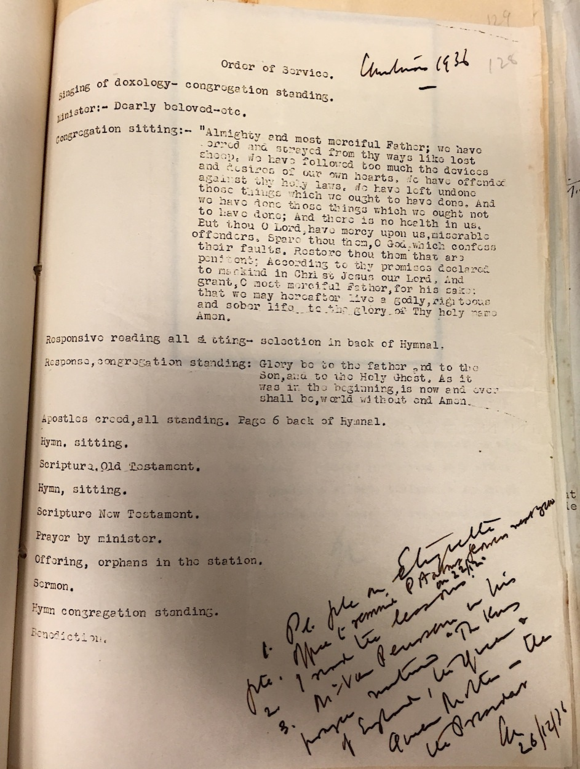 However, relations with the missionaries were not always straightforward. Dr Rev Louis P. Dame, another missionary stationed at Bahrain, wrote an annoyed letter to the Political Agent on Easter Sunday 1934 complaining that the Agency flags had been raised earlier that week for a ‘Moslem holiday’ (Eid al-Adha), but, as he wrote, ‘To-day is a Christian holiday, shouldn’t they be displayed also!’ The Political Agent wrote back with a one line response that ‘the flags of this Agency are displayed on the Christian holiday of Christmas.’ 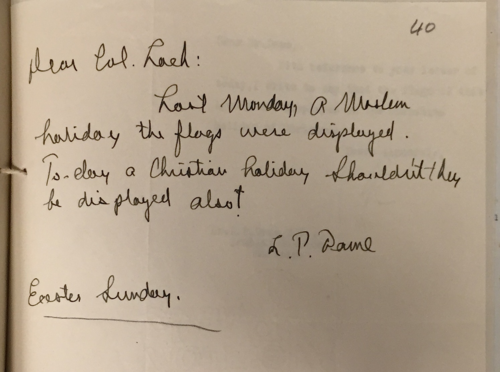 Indeed, the missionaries were viewed with some scorn since their practices and hymns were different from those to which some were accustomed. In his diaries, Charles Dalrymple Belgrave, the Adviser to the Government of Bahrain, describes the missionaries as ‘frigid’ and ‘tiresome’. In several entries on Christmas, he notes how they ‘annoyed everyone by singing some tiresome American hymns with no words or tune that anyone had ever heard before’ and how they provided ‘a very dull uninspiring service and unchristmassy hymns’.

The reality was that Belgrave, and most likely the British colonial establishment in the Persian Gulf, viewed the Mission’s Americaness with a degree of cultural snobbery. In addition, this was tinged with recurring suspicions that they were representing American geopolitical interests in the region, or, worse, they harboured secret loyalties to Germany due to their Germanic origins (see earlier post on American propaganda in post-war Bahrain). In another diary entry in 1926, Belgrave remarks: ‘[…] a long solo sung by a female with a dreadful voice and a German accent, and a sermon in broadest American which lasted half an hour’. We can only imagine what Belgrave would make of the prevalence today of ʻO Christmas Treeʼ based on the German song ʻO Tannenbaumʼ or the quintessentially ‘Christmassy’ and American ʻAll I Want for Christmas Is Youʼ by Mariah Carey.

Posted by Ursula Sims-Williams at 10:03 AM