Curzon’s Durbars and the Alqabnamah: The Persian Gulf as part of the Indian Empire

On the 21 November 1903, George Curzon, the Viceroy of Britain’s Indian Empire, held an ostentatious ceremony aboard the Argonaut while anchored of the coast of Sharjah in the Persian Gulf. In attendance were all the rulers of the Trucial Coast (now the United Arab Emirates) along with other guests from the region. The Durbar (Persian darbār 'court'), as such performances were known, was part of a tour of the Gulf that was conceived by Curzon as a way of shoring up the frontiers of the Indian Empire against the threat of the other European powers. 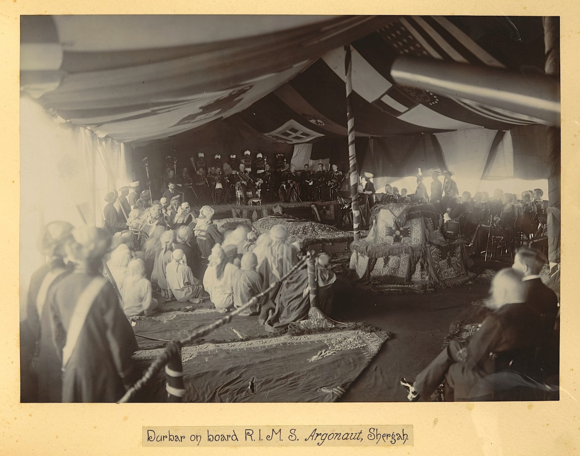 This kind of ritual was a feature of rule borrowed by the British from the Mughal emperors they had replaced in India. It was an act of royal incorporation, designed to establish, legitimise, and entrench the hierarchies of empire. A photograph from the Dane collection at the British Library shows Curzon, enthroned at centre stage, surrounded by the symbols of Indian (the carpets, the guard of men behind) and British monarchical (the crowns in the roof of the tent, the Christian cross) authority. To the Viceroy’s right sit the Arab dignitaries. Some, deprived of chairs, are kneeling or sitting on the floor.

Curzon had held a much grander version of the durbar in Delhi earlier that year to mark the coronation of King Edward VII and Queen Alexandra as Emperor and Empress of India. The ‘Official Directory of the Delhi Coronation Durbar ’ tells us that, from the Gulf region, only the Sultan of Muscat’s son and some of the tribal leaders of the Aden Protectorate attended this lavish expression of imperial rule; a reflection of where the Gulf and its rulers stood within the colonial order. 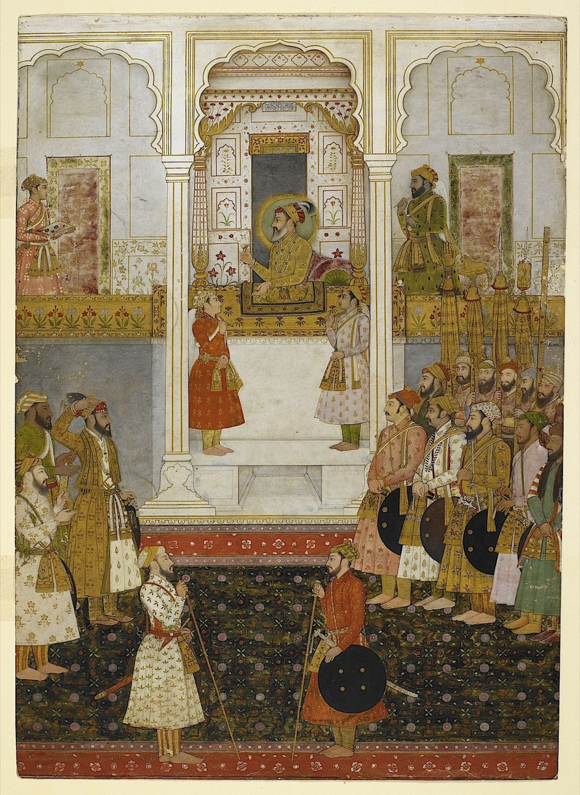 Several years later, the Government of India wrote to the Political Residency at Bushire requesting that they revise the ‘extracts from the Alqabnamah’ that relate to the Gulf. The Alqabnamah (Persian alqābnāmah 'book of titles'), first compiled in 1865, was a register of Indian princes containing information on the correct title and form of address to be used for each. It included such details as the number of guns in a ruler’s salute and the material used for the bag that carried their correspondence. 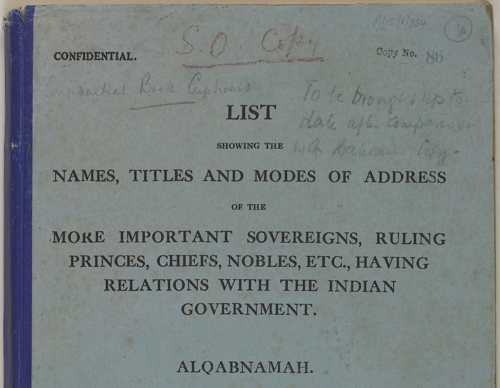 Between 1912 and the end of British rule in India in 1947, numerous revisions of the Alqabnamah were made. The discussion over these revisions reveals how the British viewed the political landscape in the Gulf. The evolution of the list shows the shifts in that landscape. From early on there is a clear hierarchy that is reflected in the distinctions accorded to each ruler, such as the terms of address used and with whom they could correspond with.

In 1912, Muscat was the only authority that could receive a letter from the Viceroy himself. This honour was granted to Bahrain and Kuwait five years later. The highest ranking officer that Qatar and the Trucial shaikhs would ever receive letters from was the Political Resident.

The wording used when addressing these rulers was also a matter that warranted much attention. During a clean-up of the register in 1925, Francis Prideaux, the Political Resident, initiated a discussion over the use of the term sa‘ādah, equivalent to ‘excellency’ or ‘grace’. Mirza ‘Ali, a Residency assistant, suggested that the word be used for Bahrain, Kuwait, and Qatar. However, James More, the Political Agent at Kuwait, questioned whether Qatar qualified as an ‘excellency’. The Agent at Bahrain, Clive Daly, balked at the idea that the term be used for the Trucial shaikhs, arguing that their ‘position and political importance’ was ‘considerably less’ than that of the rulers of Bahrain, Kuwait, and Qatar, and that it would be ‘unnecessarily flattering’. By 1935 Bahrain and Kuwait were being addressed as ‘Your Highness’ while Qatar remained ‘Your Excellency’. 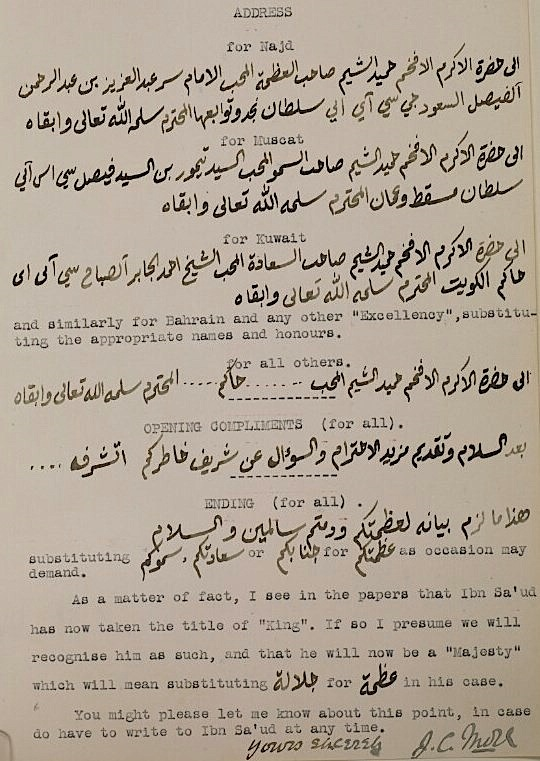 Extract from a letter from James More, Political Agent at Kuwait, outlining his suggestions for the correct forms of address for the rulers of Najd, Muscat, and Kuwait, 21 February 1926 (British Library, IOR/R/15/1/237, f. 80)

This order of importance can be explained by the political situation in the Gulf at the time. Bahrain was of economic significance to the British and its position made it an important transit point and base for naval operations. Up until the end of the First World War, Kuwait had an ambiguous relationship with Ottoman Turkey and it remained a potential entry point into the Gulf for other powers that the British wished to exclude. The promise of oil in all three countries was also a major factor.

The number of guns in a ruler’s salute reflects this same order. The Sultan of Muscat enjoyed the rare privilege of a twenty-one gun salute, putting him on a par with the most senior of Indian princes. Bahrain, Kuwait, and Qatar were each given seven guns. The Trucial Shaikhs, safely bound by century-old treaties and not deemed powerful enough to either be a problem or to offer any sort of advantage, were given the lowest salute of three guns each (except Abu Dhabi, which received five guns). 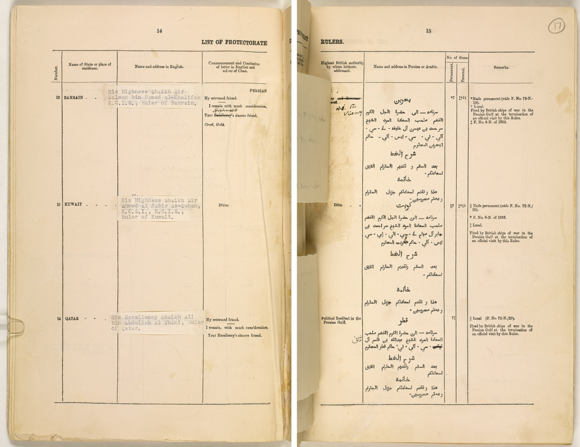 Extract from the 1935 edition of the Alqabnamah, showing the Bahrain, Kuwait, and Qatar entries (British Library, IOR/R/15/1/734)

Political changes in the region can also be detected in changes to the register. The Shaikh of Mohammerah (now Khorramshahr), for example, appears early on. At a time when Britain was seeking to maintain their economic dominance of south-western Persia, the Shaikh was given honours equivalent to those of Bahrain and Kuwait, sometimes higher. In 1926, however, following political centralisation under Reza Shah, the Shaikh lost most his power and the British lost their foothold in the area. Mohammerah was subsequently removed from the list.

Curzon’s tour of the region and the inclusion of its rulers in the Alqabnamah were both part of a process of locating the Gulf within Britain’s Indian empire. They are incidences of the Gulf’s incorporation into a system of ‘indirect rule’ that was born after the Great Rebellion of 1857 and was based upon more ‘traditional’ and ‘ancient’ articulations of authority. They placed each ‘princely state’ of the Persian Gulf within the colonial hierarchy, and helped to establish and normalise a regional order that reflected the political changes that occurred.

Many of the documents and photographs mentioned here, including copies and extracts from the Alqabnamah, are being digitised as part of the British Library Qatar Foundation Partnership and will be available online through the Qatar Digital Library.

Posted by Ursula Sims-Williams at 12:32 PM