The BP exhibition Ming: 50 years that changed China runs at the British Museum until 5 January 2015. The exhibition focuses on the years 1400-1450 when the Chinese empire reached a peak in its cultural and artistic production.  At the same time trade and exchange with other lands also flourished and the impact of Chinese culture was widely felt across Asia.

By the time of the Ming Dynasty the interaction between China and Japan was already an ancient one.  For more than eight centuries official trade and diplomatic embassies had taken place between the two countries and many aspects of Japanese government, religion, philosophy, art and literature had been influenced by contacts with China.

Among the British Library items loaned to the British Museum’s Ming exhibition is Shūbun inryaku 聚分韻略, a rhyme dictionary to aid in the composition of Chinese poetry.  It was compiled by the celebrated monk-poet Shiren 師錬 (1278-1346), also known as Kokan 虎関, who resided at the Nanzenji 南禅寺 in Kyoto, the leading temple of the Rinzai School of Zen Buddhism.

The work has a preface by the compiler dated Kagen 4 [1306] and a postscript dated Tokuji 2 [1307].  The British Library’s copy belongs to an edition printed at the Reigen’an 霊源菴, part of the Tōfukuji 東福寺, a Zen temple in Kyoto, in Ōei 19 [1412].  This is the earliest dated edition of the work although copies survive of two undated but possibly earlier editions and a version of the work may have been published during the lifetime of the compiler (ie. pre-1346)[1]. 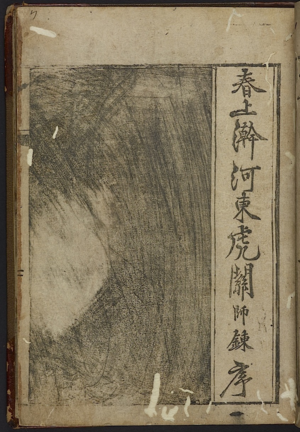 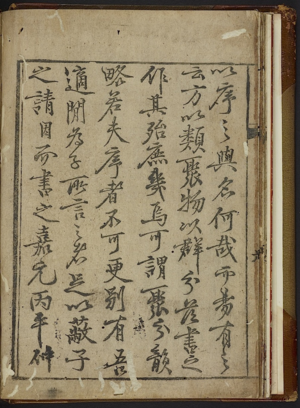 The use of Chinese characters or kanji 漢字 (literally ‘Han script’) was introduced to Japan in the fifth century and initially the Chinese language was the medium of written communication.  Later, systems were developed for representing the sounds and grammatical structures of the Japanese language:  man’yōgana, hiragana and katakana – all of which were based on Chinese characters.

Composition of Chinese poetry (kanshi 漢詩) was a popular pastime among the Japanese elite and the earliest anthology, the Kaifūsō 懐風藻 ‘Fond Recollections of Poetry’ was compiled in 751. It includes 120 poems by 64 different poets, many of them members of the Imperial Family or high-ranking courtiers.

The Shūbun inryaku is one of the earliest Japanese examples of insho (Chinese:yun shu 韻書, dictionaries of Chinese characters arranged according to rhyme and tone to assist in the composition of classical Chinese poetry.  Standard kanji dictionaries are organised according to a system of radicals reflecting the component parts of the individual character.  In Chinese rhyme dictionaries, the characters were first arranged by tone and then each of the four tones was divided into rhyme groups (Japanese: in, Chinese: yun ), traditionally named after the first character of the group. 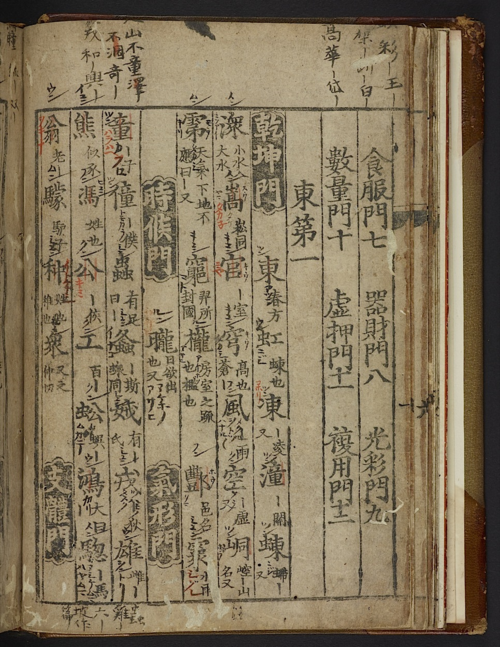 The beginning of the Shūbun inryaku showing the first rhyme group headed by the character 東 (east).  The copious handwritten annotations in black and red show that this was a well-used reference work (British Library Or.72.g.20 f. 8v)

The compiler of the Shūbun inryaku, Shiren, entered holy order on Mt Hiei in 1287 at the age of 9.  In addition to Buddhism he also studied Chinese language and classics from the age of 17 and learned calligraphy from the famous Chinese monk Yishan Yining 一山 一寧 (1247-1317).  He rose through the Buddhist hierarchy to become abbot of the Tōfukuji and Nanzenji temples and in 1342 was accorded the eminent title of Kokushi 国師 ‘National Master’ by Emperor Go-Murakami, being subsequently known as Honkaku Kokushi 本覚国師.  In addition to an anthology of poetry called the Saihokushū 済北集, Shiren also wrote the Genkō Shakusho 元亨釈書, a 30-volume work completed in 1322 which is the oldest history of Buddhism in Japan, and Butsugo shinron 仏語心論, a treatise on the Laṅkāvatāra Sūtra.

The growing importance of Zen Buddhism in Japan during the Kamakura (1185-1333) and Muromachi (1333-1573) Eras led to a renewed interest in Chinese culture.  Many Zen monks composed poetry and prose in Chinese and these works have come to be known collectively as Gozan bungaku 五山文学 or ‘Literature of the Five Mountains’.

The Gozan temples were the focus of printing activity in Japan during the 14th and 15th centuries when many Chinese works were reprinted.  Collectively these books are referred to as Gozan-ban or ‘Five Mountain Editions’.  Over 400 different works have been identified, the majority relating to Zen and other Buddhist sects.  However, 100 are non-Buddhist including Confucian texts and literary works.  They have a distinctly Chinese style since they were often reprints of Song or Yuan Dynasty editions or, in the 14th century at least, because the woodblocks from which they were printed had been carved by Chinese blockcutters who had crossed to Japan.  The British Library has some 30 Gozan-ban in its Japanese collection.  One of these, an edition of the Rongo 論語 or ‘Analects of Confucius’ (British Library ORB.30/171), printed c.1390-1450 is also included in the British Museum’s Ming exhibition. 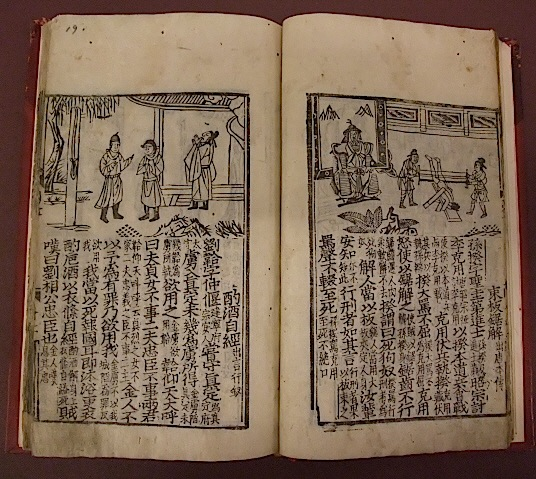 Kunshin koji 君臣故事 ‘Moral stories for sovereigns and subjects’, a guide to Confucian behaviour and one of the few illustrated Gozan-ban. c.1370 (British Library ORB.30/196)

Most of the British Library’s Gozan works, including the Shūbun inryaku, Rongo and Kunshin koji illustrated above, were acquired by the British Museum Library in 1884-1885 as part of the collection of the diplomat and bibliophile Ernest Mason Satow (1843-1929).

Ming: 50 years that changed China is open at the British Museum until 5 January 2015.

Gardner, Kenneth B, Descriptive catalogue of Japanese books in the British Library printed before 1700. London and Tenri, 1993.

Ury, Marian, Poems of the Five Mountains: An Introduction to the Literature of the Zen Monasteries, Michigan Monograph Series in Japanese Studies, No 10, 1992.

Posted by Ursula Sims-Williams at 12:02 PM