The British Library and Shandong University sign a Memorandum of Understanding 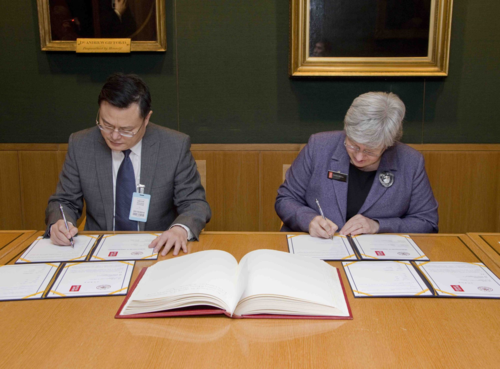 Zhang Rong (left), President of Shandong University and Caroline Brazier (right), Director of Collections of the British Library, sign the Memorandum of Understanding

Shandong University (山东大学Shandong Da xue) is a public university in the province of Shandong, with one of the largest students’ populations (about 60,000) in China, of which about 1.800 are international students. Shandong University offers master and doctoral degree programs in all major academic disciplines covering the humanities, science, engeneering and medicine. It was officially founded in 1901 in the city of Jinan as the Imperial Shandong University (山东大学堂 Shandong Da xue tang) and nowadays it comprises 8 campuses located in three different cities (Jinan, Qingdao and Weihai). Its notable alumni and professors are many. Among them, we find the German Professor and Nobel Prize for Physics Peter Grünberg and the Chinese novelist Mo Yan, Nobel Prize for Literature in 2012. The delegation from Shandong University, together with the British Library representatives during the signature ceremony