In a previous blog (Fashion in 14th century Mosul) we wrote about three leaves loaned to an exhibition at the Courtauld Gallery in London from the British Library's copy (Or.14140) of the Arabic treatise ‘Ajā’ib al-makhlūqāt wa-gharā’ib al-mawjūdāt (عجائب المخلوقات وغرائب الموجودات), an encyclopaedic work on cosmology, generally referred to as Wonders of Creation, by Zakarīyā ibn Muḥammad al-Qazwīnī (c. 1203-83). This is the first work to deal with this subject in an exhaustive and systematic way in the Islamic world; it enjoyed great popularity and was translated into Persian and Turkish. Fabulous giant bird illustrating the story of the how the man from Isfahan was rescued from a desert island and carried to safety by clinging to the bird's leg  (Or.14140, f. 39r) 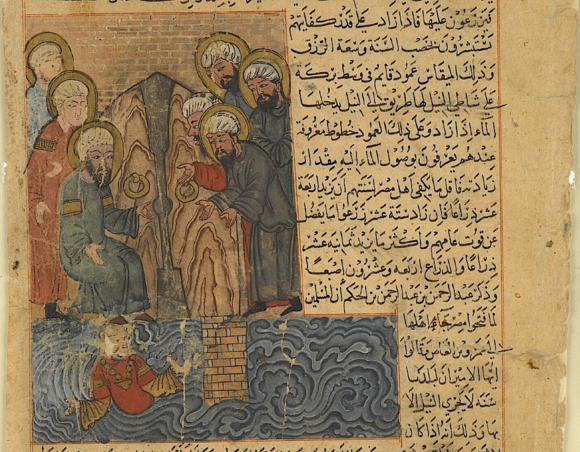 ʻAmr ibn al-ʻĀs, conqueror of Egypt in AD 640-42, advises on how to restore the waters of the river Nile. The brick structure in the water is a Nilometer, a device for measuring the water flow in the flood season (Or.14140, f. 62v)

There are very few early Arabic copies of this text, and this manuscript is thought to have been produced in Mosul at the very beginning of the 14th century. According to the undated colophon, it was copied from a manuscript copied by the author himself. The British Library purchased it from a London dealer in 1983. Originally, when the manuscript was produced in the 14th century, it was a bound codex. When it came into the library the manuscript had lost its binding, and the leaves were in such a bad condition that each one required extensive conservation. Each leaf was painstakingly conserved, individually encased in plastic sheeting and framed in a card mount. It is now stored in eight boxes. It took a dedicated conservator almost four years to complete this project. Although it is now mounted in separate frames, its original codex format is preserved in the digital version which can be read from beginning to end in one sequence.

Once it was in a fit condition for study, Dr Stefano Carboni was able to conduct exhaustive research of the manuscript’s artistic contents. He identified the subject matter of each painting, and placed the manuscript within the art historical traditions of its age.  His descriptions are available in his thesis and are due to be published as a book in 2015 (see Further reading). 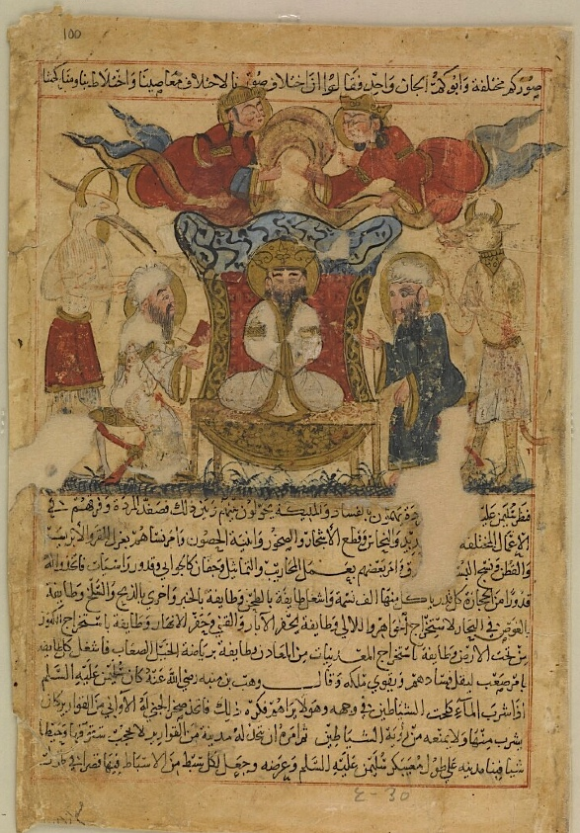 King Solomon sitting on his throne surrounded by Jinns with angels above (Or.14140, f. 100r)

This treasure of the British Library’s Arabic manuscript collection, also known as the London Qazwīnī, is best known for its miniature paintings. Covering a wide range of subjects, including such things as wildlife, plants, legendary beasts, mythical figures and daily life, the illustrations show influence from Byzantine painting traditions and display aspects of fourteenth-century costume and architecture. The manuscript is also a fascinating source for historians of Islamic art, and folios are often requested for exhibitions in the UK and abroad. Now you don’t need to wait for an exhibition to see this fantastic manuscript.

Stefano Carboni, “The London Qazwini: An Early 14th Century Copy of the ʿAjāʾib al-makhlūqāt,” Islamic Art: An Annual Dedicated to the Art and Culture of the Muslim World 3, 1988-89, pp. 15-31.
—, “The Wonders of Creation and the Singularities of Ilkhanid Painting: A Study of the London Qazwini British Library Ms. Or. 14140,” Ph.D. diss., School of Oriental and African Studies, University of London, 1992. Download free from British Library Electronic Theses Online Services (ETHoS).
—, The 'Wonders of Creation': a Study of the Ilkhanid 'London Qazwini', Edinburgh, Edinburgh University Press, 2015.

Posted by Ursula Sims-Williams at 12:05 AM