The English novelist and noted bibliophile William Beckford is highlighted in the British Library’s current exhibition ‘Terror and Wonder: the Gothic Imagination’. Exhibition curators (Greg Buzwell, Tanya Kirk and Tim Pye) feature Beckford’s Gothic novel Vathek as one of the earliest examples in this style. Beckford’s masterpiece expressed the ‘orientalist vision of hell’ and Beckford achieved this by combining ‘the fantastical, the perverse and the demonic to produce a remarkable Gothic novel’. 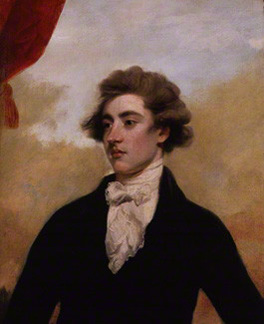 Visitors to the exhibition and readers of this blog may be interested to learn that Beckford (1760-1844) was an avid collector of prints, drawings, paintings and travel accounts relating to the Indian subcontinent and China. In fact, after Beckford’s first edition of Vathek was printed in 1786, he acquired an extensive collection of albums of Indian miniature paintings from the collection of the Swiss mercenary Antoine-Louis Henri Polier (1741-95), who was employed by the East India Company. Allegedly, the acquisition was arranged through the artist Vincent Brandoin, a friend to both Beckford and Polier, possibly around the time of Polier’s death. Lucian Harris, who researched the history of Beckford’s collection of Indian paintings, suggests that Beckford’s ‘albums of Indian miniatures probably constituted the largest body of such material in private ownership in Britain in the early nineteenth century’ and by 1819 ‘he owned about twenty-three or twenty-four albums of Indian material’.

Reputed to be one of the wealthiest men in England after inheriting a fortune at the age of ten, he amassed one of the greatest collections of art and books. Due to financial difficulties relating to his plantations in Jamaica, a major part of his library at Fonthill Abbey was disposed at auction between the years 1807-1823.  At the sale of 6 May 1817, the highest price paid for a single lot was obtained for the two volumes of miniatures ‘representing the system of Indian Mythology’, from the personal collection of Colonel A. L. H. de Polier, £267.15s0d’ (Gemmett 1972, p. 52). These albums changed hands several times, purchased by Beckford’s solicitor Mr. White in 1817 and later sold by a Mr. G. Baumgartner in 1894 to the British Museum (see Losty 1982, p. 150). 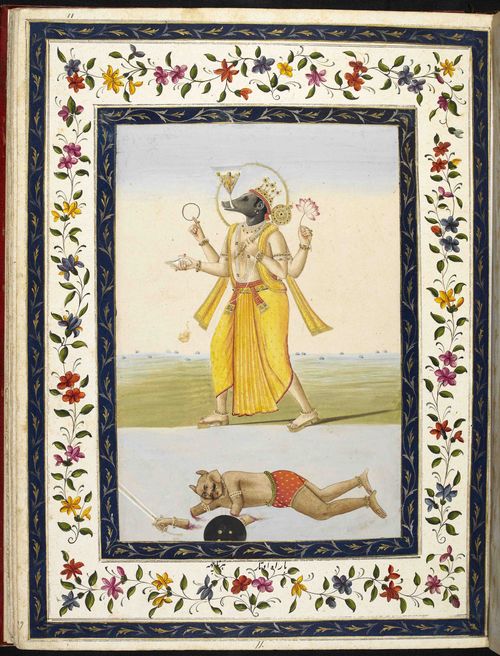 An opening from Volume 1 on Hindu mythology showing Varaha the boar avatar, bearing on the tip of his tusk the Earth depicted as a cone containing mountains and sky with the goddess within it, the demon Hiranyaksa lying supine below, his arms cut off. Lucknow, c. 1780. British Library, Or.4769, f. 11

Antoine Polier is one of the most significant patrons of late Mughal painting in the 18th century in northern India. In 1773, Polier was assigned by the Company to the court of Navab Shuja al-Daula of Avadh serving as the chief engineer and architect. In the town of Faizabad, Polier established a small studio of artists who worked at his residence. According to Polier’s letters at the Bibliothèque nationale de France, the studio was led by the painter Mihr Chand and supported by two other junior artists, whose names have yet to be corroborated with artistic evidence. Mihr Chand and his colleagues were commissioned to paint portraits of the provincial governor Navab Shuja al-Daula, portraits of Mughal emperors, topographical views of Agra, Kashmir and Delhi, as well as copies of seventheenth century Mughal and Deccani paintings acquired by the French mercenary and Faizabad resident Jean-Baptiste Gentil. Between 1773-86, the studio assembled at least fifteen albums of paintings featuring early Mughal and Deccani paintings purchased by Polier and the new commissions. An example of Mihr Chand's style is featured below. Antoine Polier also commissioned the two volumes on Hindu mythology (mentioned above) between 1773-86. Each volume (British Library Or.4769 and Or.4770) contains 32 folios with miniature paintings surrounded by decorative floral borders. The floral borders are consistent with other albums prepared for Polier. Inside the first volume (Or.4769), there are 9 pages of text by Polier describing each of the paintings and entitled ‘Explanation of the drawings of Hindu Mythology’. These two volumes have significant art historical value as they cast light on Polier’s personal interest in the subject and his role as patron. None of the other albums that were commissioned by Polier include such detailed notes on the individual works. Nor is such information included in Polier's correspondence. 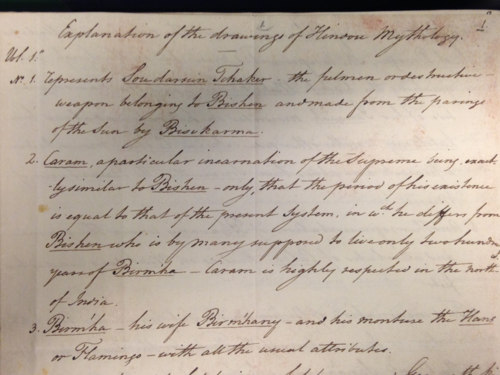 Polier's notes inside the first volume on Hindu mythology, British Library, Or.4679.

In viewing the paintings in the Hindu mythology volumes, it is immediately evident that these are incongruous to the style of paintings by Mihr Chand included in Polier’s albums. While the subject matter and delineation of the figures are traditional, the background landscapes are more simplistic; pale washes of colour are used to represent the sky or ground. Additionally, a formulaic approach is taken to casting shadows; thin dark shadows are drawn projecting behind figures. The overall compositional format is suggestive of European intervention. Although none of the paintings are signed and are by at least two different artists, they are stylistically similar to other paintings produced in Lucknow in the 1780s (see works commissioned by Richard Johnson). 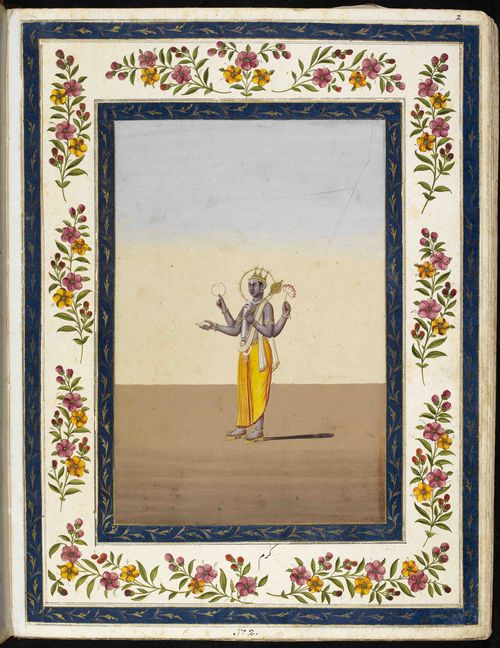 It is rather curious that William Beckford opted to sell these two volumes on Hindu mythology in 1817 while keeping many of the others. Although the contents of Beckford's library at Fonthill Abbey were up for sale over the years, the finest albums he acquired through Polier's collection were never sold. After his death in 1844, the albums were transferred to his daughter Susan, the Duchess of Hamilton, and kept at Hamilton Palace Library (Scotland). In 1882, the twelfth Duke of Hamilton privately sold twenty albums of Indian miniatures (along with other contents of the library) to the Kupferstichkabinett in Berlin. Today, the Polier-Beckford-Hamilton albums can be viewed in the Museum for Islamic Art in Berlin. The two Polier-Beckford albums on Hindu mythology are kept in the British Library.

On a side note, William Beckford's Gothic revival country house Fontill Abbey which was demolished in 1846, is now featured in a video game - which allows gamers to explore the country house through an underwater journey. Perhaps this may be of interest to readers and Beckford fans.

Harris, L.  British collecting of Indian art and artifacts in the 18th and early 19th centuries (University of Sussex, 2002)