Akbar's horoscopes: how to become a Leo if you are not

Editor: On 31 October 2014 we held a successful one-day symposium ʻBritish Library Persian Manuscripts: Collections and Researchʼ at which Dr. Stephan Popp of the Institut für Iranistik, Vienna spoke on ʻHoroscopes as propaganda under Akbar and Shāh Jahānʼ. Although he is planning an expanded version of his paper for future publication, he has kindly agreed to summarise it for us here. 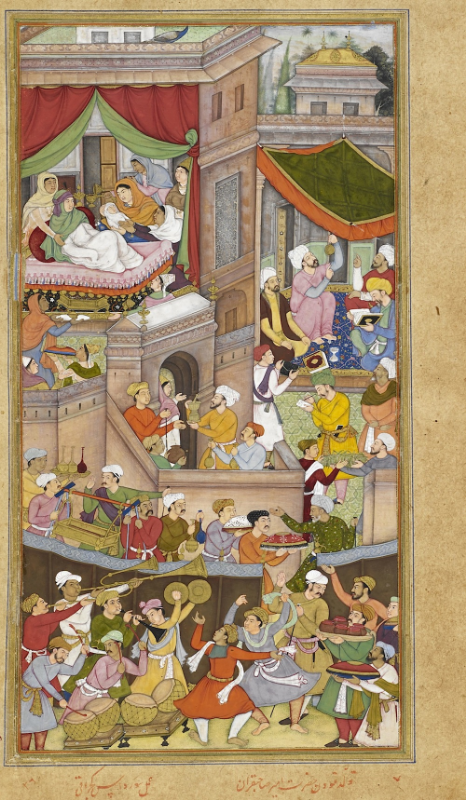 The birth of Timur showing astrologers on the right, drawing up his horoscope. From an imperial copy of Abu l-Fażl's Akbarnāma, c. 1602. Painting ascribed to Sūrdās Gujarātī (Or.12988, f. 34v)

In the 16th century, astrology was still an approved science both in Europe and in India, and many princes between Lisbon and Dhaka relied on the counsels of astrologers. Especially so the chronicle of the Mughal emperor Akbar (r. 1556-1605), the Akbarnāma by Abu l‑Fażl, which uses the emperor’s horoscope extensively to prove his claim to power. Akbar claimed to be the mujaddid (restorer of Islam) of the second Islamic millennium and the pre-destined perfect ruler. But first, some remarks on Mughal astrology and how it was supposed to work.

For this reason, let us then have a quick look at Akbar’s horoscope as it appears in the Akbarnāma: 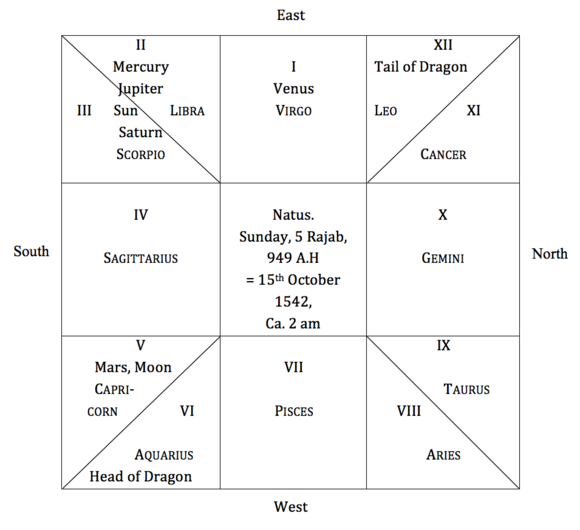 A horoscope is a diagram showing the sky over a given place at a given time. It consists of: 1) the zodiac, 2) the houses, i.e. a second zodiac constructed with the ascendant (i.e. the point that is just rising) as the starting point, and 3) the planets at their places for that particular time. This horoscope is constructed on a square grid, with the east on top (modern horoscopes are in the form of a circle, with the north on top). The twelve fields are not the zodiac signs but the houses. They are equated with the zodiac sign their first degree falls in, although this is at the very end in the case of Akbar. House I is top centre, and the other houses follow counter-clockwise. The planets are entered, but without their exact position in the zodiacal sign. Aspects, i.e. significant angles between objects that strengthen or weaken their power, are not indicated in this horoscope but are mentioned in the text where necessary. Moreover, several kinds of subdivisions of zodiac signs also have properties that strengthen or weaken a planet, which in turn strengthens or weakens a house.

Thus, a horoscope contains ca. 250 interrelated data, and the art of the astrologer consists in picking the right influences and interpreting them in an appropriate way. This is obviously highly subjective, even if the planets had influences. No wonder, as Abraham Eraly has observed (Eraly, p. 109), astrologers have been called the psychiatrists or confessors of the Mughal Empire.

This blog will show how astrologers acted not only as the psychiatrists but also as the spin doctors of the Mughal Empire. Abu l‑Fażl ibn Mubārak, Akbar’s mentor on policy and official chronicler, had a genuine interest in astrology. That he regarded it as a fully-fledged science is clear from the fact that he comes up with four different horoscopes of Akbar and discusses their differences (Akbarnama, pp. 119–123). Eva Orthmann (p. 108 below) proves that the horoscopes are based on genuine calculations and not made up by Abu l‑Fażl. Abu l‑Fażl writes that an Indian and a Western horoscope were cast at Akbar’s birth in 1542 by Jyotik Rai and by Maulānā Chānd. The results were different due to the different definitions of zodiacal signs in Vedic and Western astrology. Indian astrology defines the zodiac as the constellations in the sky whereas western astrology defines the zodiac as the ecliptic divided into twelve equal parts beginning from the spring point (where the sun rises at the spring equinox). The spring point, however, slowly moves backward through the constellations, so that at the present time it is at the end of Pisces, not in Aries. 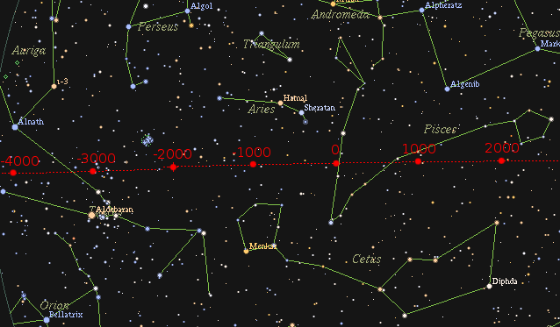 The precession of the spring point (0° Aries) in the last 6000 years. Kevin Heagen via Wikimedia Commons

Because of this movement, Abu l‑Fażl says, the Vedic results were 17° behind the Western ones in Akbar’s time (whereas now they are 25° behind). Thus, Akbar’s ascendant fell in Leo according to the Indians, which suited an emperor, but in the Western horoscope, it fell in Virgo. Abu l‑Fażl discusses this difference, effectively discrediting the Indian astrologers (pp. 119–122). Still, as acknowledged by Orthmann (p. 110), ‘royal’ Leo would have been a much more suitable ascendant for an aspiring emperor than Virgo.

When the great scientist and physician Fatḥullāh Shīrāzī joined Akbar’s court in 1583, Abu l-Fażl asked him to correct the two horoscopes. Instead, Fatḥullāh cast his own, using the old “star tables of the Greeks and Persians” of ca. 830 AD instead of the new ones of Ulugh Beg. In this way, he arrived at the ascendant falling at the very end of Leo (28°36’) instead of 7° Virgo. Abu l-Fażl calls this “the most reliable horoscope” (p. 94) although containing outdated data, and devotes two chapters to its description and predictions.

How Fatḥullāh Shīrāzī managed to put the ascendant back into ‘royal’ Leo. The old tables shift the house grid 9½ degrees back. The grid has also passed over Venus, so that it is at the beginning of the second house now, not at the end of the first.

When the diagram was ready, the task of the astrologer was to pick those influences that suited successful rule. Combining the right influences from the vast data, Fatḥullāh Shīrāzī sings Akbar’s praises (p. 111):

As this (4th) house is a Fixed Sign, and its lord (Mars) is in exaltation and has a beneficent aspect, territory will continually be coming into the possession of the King’s servants…,

The Native will exceed the natural period of life, viz., 120 years. 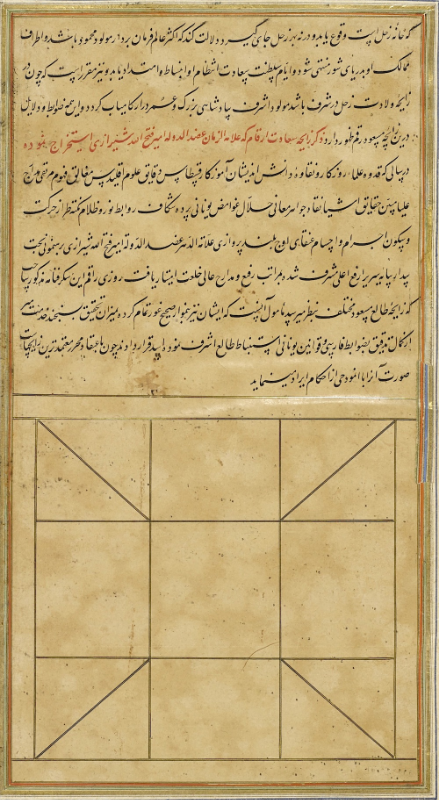 Abu l‑Fażl's chapter describing Fatḥullāh Shīrāzī's horoscope.  Although the diagram has been left blank, the details are all supplied in the Persian text (Or.12988, f. 15r)

Overall, the horoscopes emphasize Akbar’s success in conquest, acquiring wealth and in administration, and his supreme reason by which he guides the state and settles disputes. Moreover, the astrologer Maulānā Chand argues that Akbar is greater than Timur because Akbar’s Mars is stronger (p. 79). That the horoscopes contradict themselves is only superficial, Abu l‑Fażl concludes, for, he claims, God hides Akbar’s greatness from the undeserving (p. 123):

Owing to the jealousy of God, the truth of the holy nativity remained under the veil of concealment and was hidden behind the curtain of contradiction. But… if each of the horoscopes be looked at with the eye of judgment… it becomes plain that… there is nothing equal to them.

A person deserving special mention was, according to Abu l‑Fażl, Akbar’s father Humāyūn, an accomplished astrologer and “by the perfection of his personality enlightened by flashes of forthcoming events” (p. 124). Humāyūn danced with joy when he read the horoscope, Abu l-Fażl says. In this way, he tries to make his readers believe that if they see nothing but contradiction, this is because they do not see well enough. Even the astrologers, accomplished scientists, did not see everything. But they did their very best to combine their data in the way that Akbar and Abu l‑Fażl wanted them to: to “discover” that Akbar was the king of kings.