The expansion of European power in the 16th century made Southeast Asia one of the prime destinations for European adventurers, including not only merchants but also Christian missionaries. Profits from overseas trade in exotic goods from this region, such as spices and forest products, attracted European traders to Southeast Asia, long before this commercial activity spiralled and became an integral component of Western colonialism. The desire to convert local people to Christianity also brought priests into various parts of Southeast Asia from the early 16th century.

Western missionaries, diplomats and traders all needed to be able to communicate with the indigenous populations, and dictionaries were essential tools in facilitating their work. In 1522 Antonio Pigafetta, an Italian who joined Magellan’s circumnavigation of the globe, compiled a word-list of Malay with approximately 426 entries. In 1651, the Dictionarium Annamiticum Lusitanum et Latinum, a trilingual Vietnamese-Portuguese-Latin dictionary compiled by Alexandre de Rhodes, was published in Rome for religious purposes. His work contributed tremendously not only to the development of dictionaries in Vietnamese but also to the use of Romanised script for the Vietnamese language (Quốc Ngữ or national language).  Rhodes was a French Jesuit priest and lexicographer who was sent to Vietnam in 1619. His dictionary was later used in the development of a Vietnamese–Latin dictionary compiled by another French missionary, Pigneau de Béhaine, in 1783. The latter work was revised by Jean-Louis Taberd and was published as a Chinese-Vietnamese-Latin dictionary in 1838. On March 30, 1795, the Institut National des Langues et Civilisations Orientales (INALCO) (National Institute of Oriental Languages and Civilizations) was founded in Paris, with a mission to teach living Oriental languages ‘of recognized utility for politics and commerce’. The British and the Dutch were engaged in similar academic activities, and various centres for research and scholarship in ‘Oriental Studies’ were founded in London, Leiden and overseas. In July 1800, Fort William College was established in Calcutta. Founded by Lord Wellesley, the Governor-General of British India, it emerged as a research and publication centre with a primary aim of training British civilians in languages and cultures of the subjugated country. The College published thousands of books in English, translated from major languages of the Indian subcontinent, including dictionaries of Bengali, Hindustani and Sanskrit.

In Britain, the London Oriental Institution was co-founded by John Borthwick Gilchrist and the East India Company in 1805, primarily as a college to teach Indian languages to civil servants.  Gilchrist had been the first professor of Hindustani at Fort William College in Calcutta. However, as British interests were not only limited to India but also included Southeast Asia , the Council of the Fort William College also recommend that the government of India should compile a similar work in the major languages of mainland and maritime Southeast Asia (then vaguely named collectively as the nations in the Eastern isles, between India and China). Hence, the Comparative Vocabulary of the Barma, Maláyu and Thái Languages by Dr John Leyden was published in 1810. 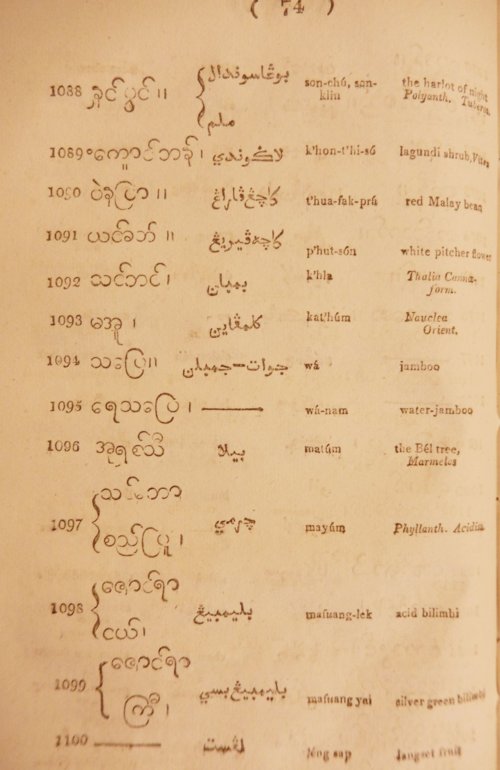 The Comparative Vocabulary has 3166 entries in Burmese, Malay in Jawi script, Thai in Romanised script and English. The entries were not listed in alphabetical order but arranged by topics, such as God, nature, the elements, diseases, trades, commerce, ships, armies and warfare, and government. In the 1830s, Eliza Grew Jones, a Baptist missionary who travelled to Burma and Siam, compiled a handlist of about 8,000 Thai-English words, phrases and terms.  Her original manuscript has now disappeared, but in 1839 the Rev. Samuel P. Robin had made a copy of her work, and this manuscript dictionary is currently held in the Widener Library, Harvard University.

Printing in Thai script in Thailand only began in 1835, when an American Protestant missionary, Dr Dan Beach Bradley (1804- 1873), brought a Thai script printing press from Singapore to the kingdom. This made it possible to publish Thai and multilingual dictionaries, the first appearing in 1854. It was compiled by Auctore D. J. B. Pallegoix, a French missionary to Siam during the mid-1850s. Entries appear in Thai, Latin, French and English and were arranged according to Roman alphabetical order. 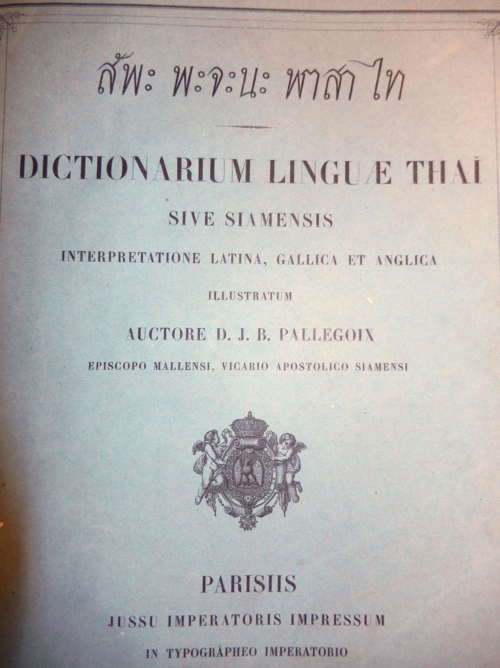 In 1828, A Grammar of the Thai or Siamese Language, written by Captain James Low while he was serving with the East India Company in Penang, was printed in Calcutta. This comprehensive analysis of Thai language can be regarded as one of the earliest textbooks on Thai grammar in a western language. The text also contains Thai script and a long Thai-English vocabulary. Low’s introduction to the book reads: ‘The proximity of the Siamese empire to the British settlements in the Straits of Malacca, and to the lately acquired territory of Tennasserim; the increasing number of Siamese living under British protection in these settlements; and the new political relations which exist betwixt the British and the Siamese courts; have rendered it desirable that facilities should be afforded for the study of the Siamese or Thai language, to those to whom, either from their public or professional situation, a knowledge of it may be advantageous….But it is also manifest, that without the knowledge alluded to, our intercourse with the Siamese must be limited and unsatisfactory, while we cannot expect to gain an accurate acquaintance with their real history and character as a people, or with their ideas, their literature, and their polity. ‘ 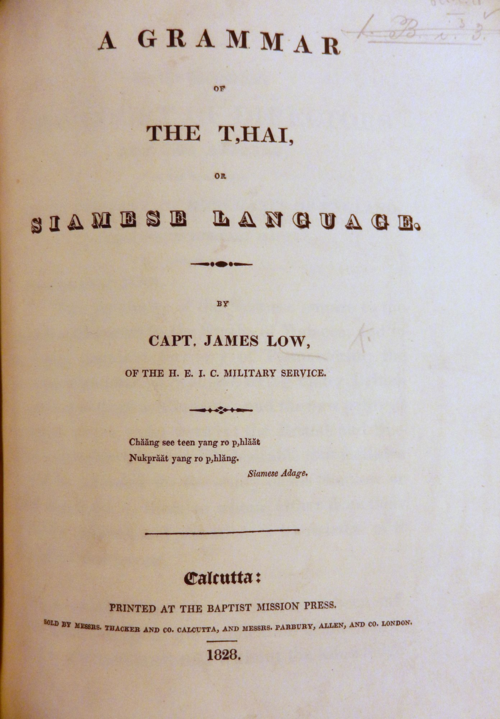 As more Westerners travelled to Southeast Asia in the 19th century, dictionaries played a vital part in facilitating dialogue with locals. Some travel journals from this period introduced lists of essential words in local languages. For example, Frederick Arthur Neale, who wrote an account of his visit to Siam in 1840, compiled a list of 100 Thai words and 18 Thai numbers in his Narrative of a Residence at the Capital of the Kingdom of Siam (Neale 1852: 238-241). When Henri Mouhot’s travel diaries of Siam, Laos and Cambodia between 1858-1860 were published in London in 1864, there was a substantial Cambodian vocabulary and list of phrases in the appendix to his book. These linguistic activities by foreign travellers illustrate Western attempts to understand Southeast Asian cultures and languages, even though they were primarily to serve their own political and economic interests.

Neale, Frederick Arthur. Narrative of a Residence at the Capital of the Kingdom of Siam. London: Office of the National Illustrated Library, 1852.

Posted by Annabel Gallop at 1:04 PM