Sources for the study of Muhammad Vajid 'Ali Shah

The last king of the independent state of Avadh (Oudh), Muḥammad Vājid ʿAlī Shāh (1822-87, r. 1847-56), poetically known as Akhtar, regarded the arts of poetry and formal prose as an integral part of his self-expression and prerogative as a trendsetting, enlightened ruler and patron. Although Vājid ʿAlī Shāh's literary compositions are numerous, the British Library’s Persian and Urdu collections presently hold only a small number of these works, some of which are unique and are illustrated below: 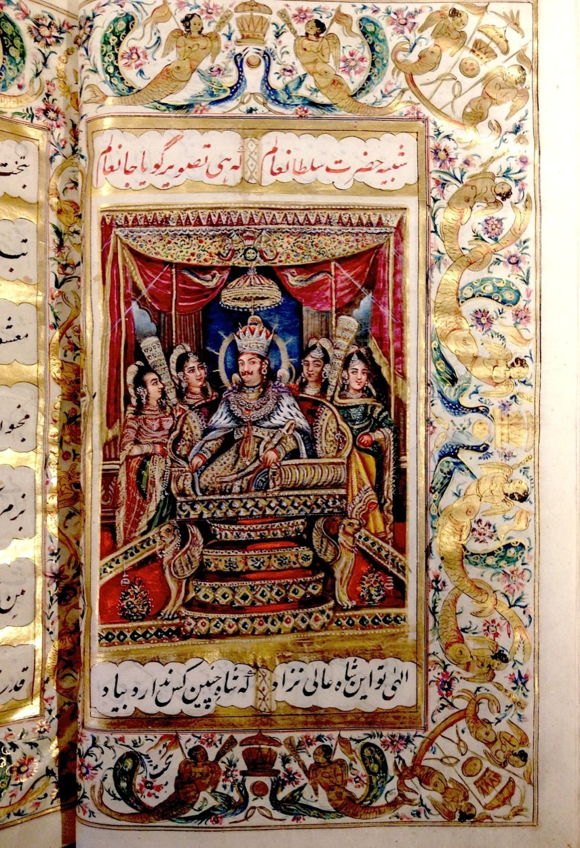 'Vājid ʿAlī Shāh enthroned with attending maidservants,' a painted lithograph included in the heavily embellished Tāʾrīkh-i Mumtāz or ‘the choicest of histories,’ comprising the dethroned king’s Persian and Urdu letters and poems addressed to his consort Mumtāz Jahān the Iklīl Maḥall Ṣāḥibah (BL Or. 5288, f. 12v)

Preface (right) and painted frontispiece of 'Vājid ʿAlī Shāh seated with attendants' (left) pasted over the lithograph's original title page, from the Baḥr-i Ulfat or ‘the ocean of love’, an Urdu romantic mas̲navī  in the dāstān tradition  (BL Or.70.c.3, frontispiece) 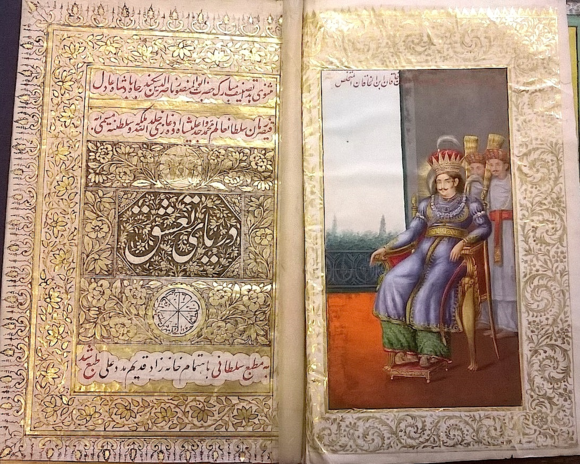 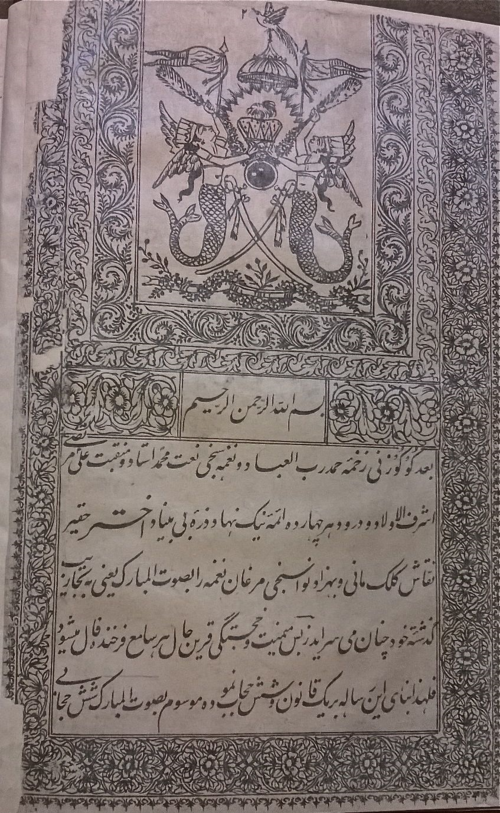 Opening from the Ṣawt al-Mubārak or ‘the auspicious voice,’ an important Persian prose treatise on the South Asian musical tradition and its relationship with literary tropes (BL 14835.e.1, p.2) 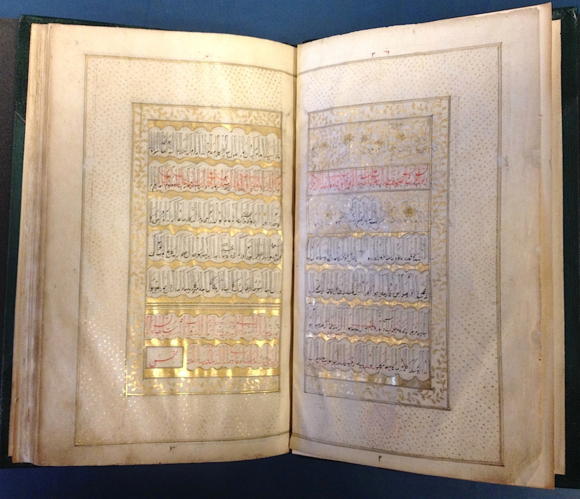 Beginning of the Urdu prose preface from the Dīvān-i Parīshān or ‘the dishevelled collection [of verse]’, a small Persian and Urdu dīvān notable for its idiosyncratic calligraphy, possibly by the king himself (BL Or.8648, ff. 1v-2r)

Two new sources
The British Library additionally possesses two contemporary Persian histories recording events from Vājid ʿAlī Shāh’s brief reign which deserve renewed attention having come to light as a result of our work on Charles Storey's unpublished catalogue descriptions (see our earlier blog A newly digitised unpublished catalogue of Persian manuscripts). The first of these is the history Sulṭān al-Ḥikāyāt or  ‘the ruler of stories,’ composed by Lāl-jī of Karrā in 1853 (BL IO Islamic 3902). 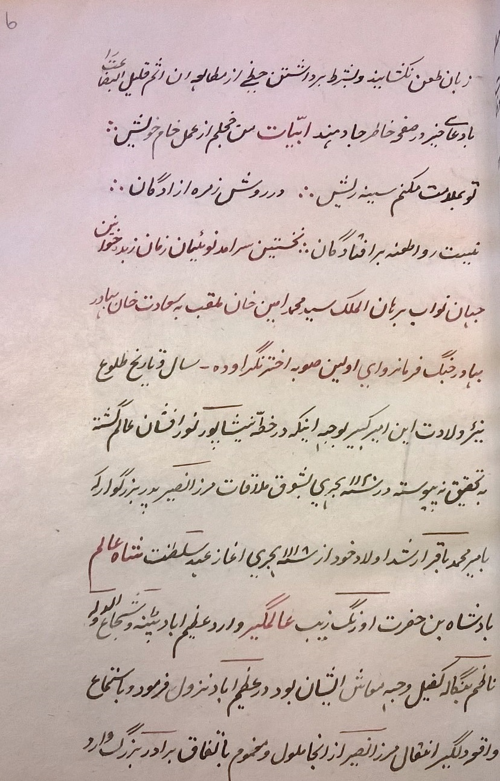 Page from the Sulṭān al-Ḥikāyāt showing the beginning of the first discourse, copied in 1893 by Muḥammad ʿAbd al-ʿAzīz of Ghāzīpūr from a manuscript in the library of the deceased Mawlavī Sayyid Imdād ʿAlī Khān and then dispatched to Britain for the collector, Orientalist scholar, and retired civil servant of British India, William Irvine (BL IO Islamic 3902, f. 6r)

Commencing with a brief introduction, Lāl-jī records his reaction to reading a contemporary history, the Mirʾāt al-Ishtibāh of Mawlavī Fakhr al-Dīn Ḥusayn Dihlavī commissioned by the last Timurid or Mughal Emperor, Bahādur Shāh II (d. 1862), styled in simple prose with a straightforward chronological structure. Noting the narrative complexity and difficult prose of Avadh’s official courtly histories, Lāl-jī determined to recast them with a similar emphasis on factual data, brevity, and dates according to the lunar Hijrī calendar with conversions to the Gregorian equivalent. Beginning with the history of Avadh from the origins and ascendance of Vājid ʿAlī Shāh’s ancestors, the narrative continues at a rapid pace until the period of the king’s reign; closing with the arrival in Lucknow of William H. Sleeman for his tour of Avadh.

The second of these works is the Ījāz al-Siyar or  ‘the epitome of biographies’ (BL IO Islamic 3886), by the little-known author, Pūran Chand. Described as a “history of Oudh,” the work is in reality much harder to categorise. It may be a unique work, and its condition indicates that it had not progressed much beyond the stage of a brouillon. Its folios are filled with corrections and marginal additions by several hands ranging in quality, from bold scribal nastaʿlīq to a more practiced shikastah hand. 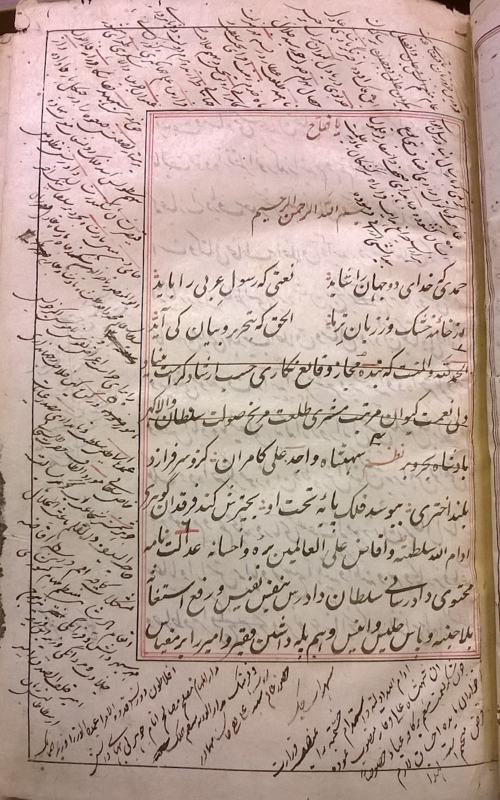 Pūran Chand’s preface describes the Ījāz al-Siyar as the abridgement of an as yet undiscovered, prolix chronicle, entitled the Sulṭān al-Siyar or  ‘the ruler of biographies’), commissioned officially and supervised personally by Vājid ʿAlī Shāh. However, the Ījāz al-Siyar is itself most unlike an annalist chronicle. Firstly, there is little coherence within and between its numerous sections or bāb. Secondly, its sections are not in any particular chronological order. Thirdly, its sections alternate irregularly between unrelated accounts in prose and lengthy citations of chronogrammatic poems or tāʾrīkh.

Rather than a chronicle per se, the distinctly encyclopaedic Ījāz al-Siyar lends itself to being interpreted as an anthology of supplementary abstracts and assembly of discrete compositions for the greater, narrative chronicle, the Sulṭān al-Siyar. Reinterpreted this way, the work functions in much the same way as the Āʾīn-i Akbarī complements and supplements the famous Mughal chronicle, the Akbarnāmah of Shaykh Abū al-Fazl. Taking into account the sheer length of the Ījāz al-Siyar, comprised of over 300 densely-written folios, one can only image the length and scope of the official regnal chronicle that it supplements.

For scholars of Persian literature and South Asian history, both the Sulṭān al-Ḥikāyāt and Ījāz al-Siyar deserve to be studied in detail as works that, in their own different ways, present much valuable information on an important period of history and literary efflorescence.

Posted by Ursula Sims-Williams at 3:59 PM