The Bugis diary of the Sultan of Boné

The official diaries maintained in the Bugis and Makassarese courts of south Sulawesi constitute a uniquely rich source of data for the history of Indonesia, for no other Muslim kingdoms in Southeast Asia are known to have instituted such a meticulous practice of record keeping. The diary tradition appears to have begun in the early seventeenth century, coinciding with the Islamisation of the states, but was also strongly influenced by intellectual contact with Europeans, principally the Portuguese, for the diaries are predominantly ordered by the Christian calendar. 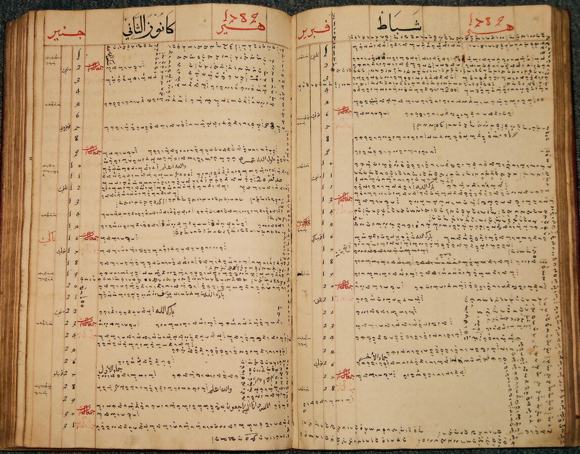 The British Library holds eleven volumes of court diaries in Bugis, all from the kingdom of Bone (see Ricklefs & Voorhoeve 1977: 27-35).  The earliest (MSS Bugis 1), covering the dates 1660 to 1696, is that of Arung Palakka, the 16th ruler who engineered the spectacular rise of Bone in the 17th century by allying himself with the Dutch to defeat the kingdom of Makassar in 1669.  Other diaries, some kept by senior court officials, cover the periods 1714 through to 1809, albeit with some gaps.  One of the most important Bugis diaries in the British Library, Add. 12354, has just been digitised. This is the diary of Ahmad al-Salih Syamsuddin, who ruled as the 22nd sultan of Bone from 1775 until his death in July 1812. An adherent of the Khalwatiyya Sufi brotherhood, Ahmad al-Salih was renowned for his religious learning, and was the patron of an exceptionally fine illuminated Qur’an manuscript (Gallop 2010). He began writing the diary in his own hand on 1 January 1775, and continued until the end of 1795. His diary was recently the subject of a doctoral dissertation by Rahilah Omar (2003), and the comments below are largely based on Rahilah’s pioneering study. 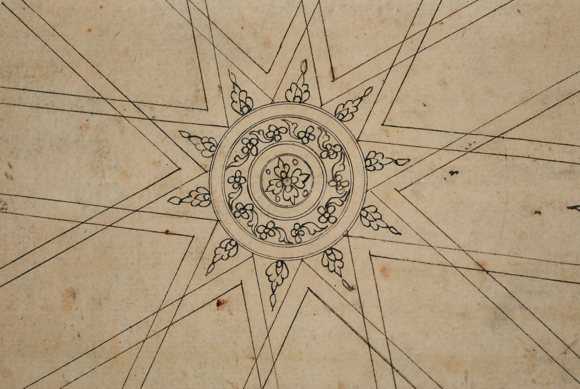 Sultan Ahmad al-Salih’s diary was prepared according to the standard format for official Bugis diaries. Large folio-sized sheets of high-quality European, usually Dutch, paper were bound in volumes, with one page allocated to each calendar month of the year. At the top of the page was written in red ink on the right the year in the Christian era in ‘European’ numerals, and on the left the Portuguese name of the month in the adapted form of the Arabic script called Jawi. In the middle, in black ink, was inscribed the equivalent month, not according to the Hijrah era as might be expected, but according to the Ottoman ‘Rumi’ solar calendar.  Each Friday (Jumaat) is highlighted in red, with an elaborate knotted final letter, ta marbuta. One line was allocated for each day of the month, also written in European numerals. Following the end of one year, and the start of a new one, two pages were left blank. These pages could be filled with notes or copies of letters or other important documents, or sometimes doodles and interesting examples of designs.

The first entry in Sultan Ahmad al-Salih's diary: on 1 January 1775 he wrote, in Bugis and Arabic, ‘I started writing this diary. God's blessing. There is no god but God, Muhammad is His Messenger.’  At top left in red is the month Janir (from the Portuguese Janeiro); in the middle is the Ottoman month Kānūn al-thānī; on on the right is the year in the Christian Gregorian era, hir 1775. British Library, Add. 12354, f. 6v (detail).

Daily entries in the diary are written in the Bugis language, and in the Bugis script of Indic origin, but with occasional conventional pious phrases in Arabic, such as baraka Allah, ‘God’s blessing’. As Bugis script is written from left to right while Arabic is written from right to left, a certain amount of planning was needed on the part of the writer to estimate exactly how much room to leave in order to fit in a phrase in Arabic.  Some pages have lines left blank on days when no entry was made. On particularly busy days, entries could easily stretch to more than a line, and extra text was fitted in by making judicious right-angled turns wherever spaced allowed, resulting in labyrinthine patterns across the page. 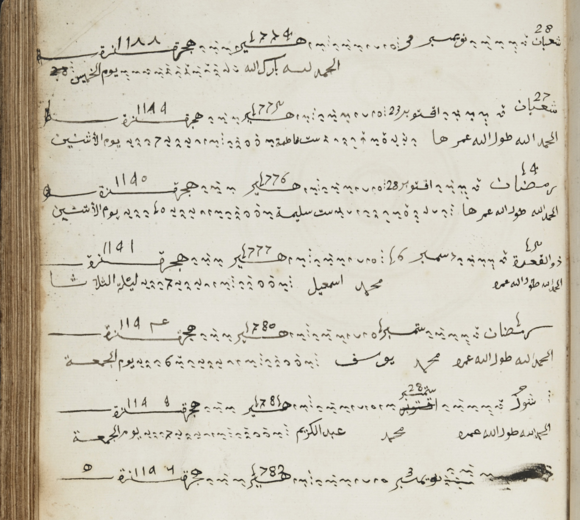 Sultan Ahmad al-Salih noted on a spare page in his diary the milestones of his personal life: at the top, his marriage to I Tenripada on 3 November 1774, followed by the dates of the births of six of his children, starting with Siti Fatimah at 7 a.m. on Monday 27 Syaaban 1189, equivalent to 23 October 1775. British Library, Add. 12354, f. 184v (detail).

Apart from major political events, in his diary Ahmad al-Salih also comments on the wide range of economic activities in Bone, from wet-rice cultivation to fish-farming, with information on taxes levied on land and river tolls, and the role of slavery. Hobbies and pastimes such as horse riding, sailing on the river, cock fighting and literary pursuits are all noted. Religious festivals are described, and a steady stream of people come to request permission from the sultan to perform the pilgrimage to Mecca (and in 2013 Ahmad al-Salih's diary was selected for display in the British Museum exhibition, Hajj: journey to the heart of Islam). There is information on an exceptionally varied number of subjects, from bride prices to infant mortality. Over the twenty years covered in the diary Ahmad al-Salih documents 89 births in court circles, including 11 deaths and the reasons for these, whether premature delivery or stillbirth (Rahilah 2003: 206). Rahilah has commented that the sultan's remarks are generally factual and he rarely makes personal comments. Nonetheless, amongst the births he describes, only in the case of his own wife does he depict the agony of a woman in labour, noting on 16 December 1794, 'Puang Batara Tungkeq screamed as she suffers [a terrible] stomach pain'. Luckily, the delivery of the baby went well, and the sultan expressed his gratitude and fondness with a gift: 'After 2.00 [p.m.] Puang Batara Tungkeq gave birth to a baby boy ... I gave her two jemma [court maids] as a sign of good wishes for her health' (Rahilah 2003: 205). This is just one of the wealth  of details contained in Sultan Ahmad al-Salih's diary on all aspects of life – political, diplomatic, religious, economic, social and cultural – in Bone in the late 18th century, as uncovered in Rahilah Omar's study.